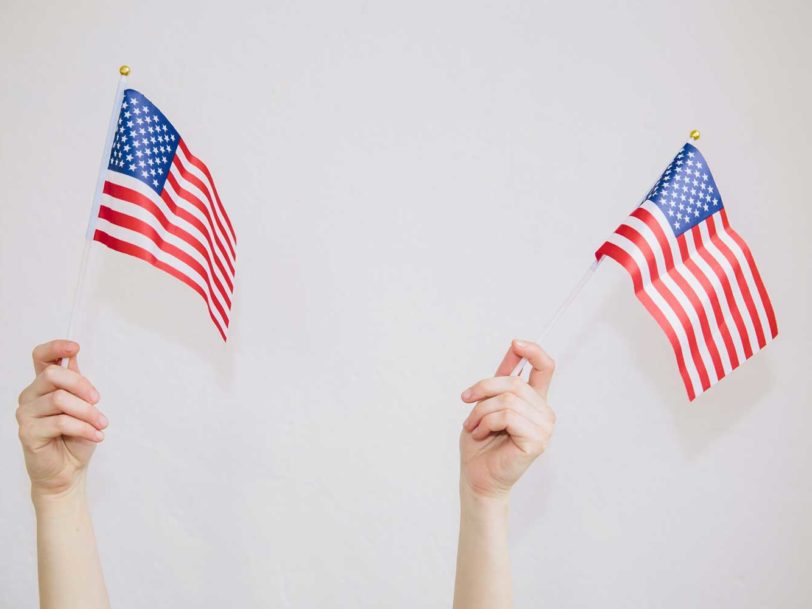 Best Songs About America: 15 Rockers In The Free World

Whether the States is united or divided, these best songs about America celebrate – and sometimes critique – The Land Of The Free.

It’s a rhetorical question, but can you really imagine how rock and pop music could have evolved without the United States Of America? If it wasn’t for indigenous music such as the blues, we wouldn’t have had rock’n’roll and all that came after, so it’s fair to say we owe the US a pretty hefty debt of gratitude when it comes to most musical genres. Celebrating – and sometimes critiquing – one of the biggest nations in the world, the best songs about America go some way towards repaying that debt.

A song which proudly champions the American way of life, Chuck Berry’s 1959 hit Back In The USA was inspired by an Australian tour during which the pioneering rock’n’roller witnessed the native Aboriginal peoples’ less-than-salubrious standard of living. A low-riding rocker performed with an all-star blues band including pianist Johnnie Johnson and bassist Willie Dixon, Back In The USA featured vivid lyrics (“Looking hard for a drive-in, searching for a corner café/Where hamburgers sizzle on an open grill night and day”) which yearned for the comforts of home. An early contender among the best songs about America, its appealing, all-American slant has since lent itself to memorable covers by artists ranging from MC5 to Linda Ronstadt.

America Is Waiting was the opening track on David Byrne and Brian Eno’s groundbreaking collaboration My Life In The Bush Of Ghosts: a record which presaged the age of sampling by integrating found sounds and “guest” vocalists ranging from TV evangelists to Lebanese mountain singers. Originally going uncredited in the album’s sleevenotes, America Is Waiting featured the voice of San Francisco-based radio talk-show host Ray Taliaferro, known for his lively (and sometimes) confrontational broadcasts. Like Byrne and Eno themselves, Taliaferro was a pioneering figure in his field: he’s widely believed to be the first Black talk-show host to have graced a major radio station in the US in 1967, and his manic delivery worked beautifully when aligned with the claustrophobic hypno-funk of Byrne and Eno’s music.

Effectively James Brown’s swansong, 1985’s Living In America provided the Godfather Of Soul with his first Billboard Top 10 hit in a decade and also his first and only UK Top 10 smash. One of the best songs about America, this brash, confident single gained additional exposure through its use in the high-profile movie Rocky IV (starring Sylvester Stallone), and it was promoted with an equally slick (and extremely memorable) video depicting the razzmatazz of the US in the glorious Technicolor.

Detroit proto-punks MC5 often took flak for their pro-counterculture stance and anti-establishment leanings, but they weren’t anti-patriotic – rather, they were concerned citizens who were royally sick with the status quo as they saw it in the late 60s. The group made an especially concerted attempt to address the big issues of the day on their second album, 1970’s Back In The USA, produced by future Bruce Springsteen mentor Jon Laudau. Its most incendiary rocker, The American Ruse, found them raging against the US political machine in style: “I learned to say the pledge of allegiance/Before they beat me bloody down at the station.

Simon And Garfunkel’s fourth album, Bookends, explored a life journey from childhood to old age. A lofty concept on paper, it was executed to near-perfection on record, attracting widespread critical acclaim and topping both the US and UK charts. One of the album’s key tracks, America, concerned young lovers hitchhiking their way across the US in search of “America” – in both a literal and figurative sense – and it was an entirely personal song for Paul Simon, who had made such a journey in 1964 with his then girlfriend, Kathy Chitty. Undoubtedly one of the best songs about America, Rolling Stone declared that it “evokes the panorama of restless, paved America and simultaneously illuminates a drama of shared loneliness on a bus trip with cosmic implications”.

Such was the level of excess in and around Alice Cooper’s band in the early 80s that Cooper has since admitted he recalls little about recording his final trio of Warner Bros albums, Special Forces, Zipper Catches Skin or DaDa. However, these records contain a fair smattering of decent material, not least DaDa, which adroitly mixes Cooper’s tried and tested horror-rock with more modern, new wave leanings. Its first single was the excellent I Love America: a widescreen anthem with tongue-in-cheek lyrics (“I love that mountain with the four big heads/I love Velveteen slapped on Wonder Bread/I love a commie, even if he’s good and dead”) which alternates between hailing and lambasting a wealth of all-American clichés.

The Doors actually nailed L’America some months before the LA Woman sessions, as the song was intended for Italian director Michelangelo Antonioni’s cult 1970 movie, Zabriskie Point. When it ended up on the cutting-room floor, The Doors included it on LA Woman, where it sits well among other brooding, atmospheric songs such as Hyacinth House and Riders On The Storm. There’s still a debate as to whether Jim Morrison was referring to Latin America or Los Angeles with the song’s title, but wherever the truth lies, L’America has bags of presence and a hypnotic final coda which never fails to impress.

The lyrics to Don McLean’s enigmatic, yet eminently catchy American Pie have been pored over for decades, with the song’s many fans undertaking nigh-on-forensic searches for Bob Dylan-esque hidden meanings. McLean himself later confessed that at least some of it was autobiographical, though the song’s most famous phrase, “The day the music died”, definitely refers to the notorious plane crash which killed Buddy Holly, Richie Valens and The Big Bopper. American Pie’s mystique has always been part of the attraction, but as its popularity has long since crossed genres, and it ranks in the Top 5 of the most successful songs in the US (just behind Over The Rainbow and White Christmas), questioning its status as one of the best songs about America is a fool’s errand.

David Bowie disentangled himself from the tail-end of glam with 1974’s Diamond Dogs album, but he flipped the script completely with its rapid-fire follow-up, 1975’s Young Americans, which found him exploring his growing obsession with soul music. Stylistically, it was an abrupt volte-face, and releasing the album’s title track as its lead single was a risk – not least because the song married a slice of slick Philly soul with a memorably cynical lyric referencing potentially taboo subjects such as McCarthyism and disgraced former US President Richard Nixon. As ever, though, Bowie’s fearless ambition won the day, and Young Americans scored him his breakthrough US hit. Almost five decades on, it might just be the best song about America written by an Englishman.

Arguably the most openly patriotic entry in this list of the best songs about America, America The Beautiful is a hymnal with a chequered past. Its lyric was penned by US professor Katherine Lee Bates, and its music was composed separately by a New Jersey choirmaster and organist, Samuel A Ward, in the late 19th century. The two weren’t put together until 1910, however, when the song officially became known as America The Beautiful. Hauntingly beautiful, it has since been recorded by a host of stars, including Bing Crosby, Frank Sinatra and Charlie Rich, though the deeply felt, soul-infused version Ray Charles recorded in 1976 for the US Bicentennial arguably remains the definitive take.

Madonna has never shied away from controversy, but even by her standards, American Life polarised opinion. However, while critics homed in on its lyrical content, the song still topped the charts in numerous territories, and it certainly got people talking – surely one of pop’s primary functions, even in these jaded times. American Life’s unlikely amalgam of folk, pop and techno still sounds futuristic, and while Madonna was railing against the shallowness of modern life during the presidency of George W Bush, her barbed observations (“I’m just living out the American dream/And I just realised that nothing is what it seems”) still provide food for thought.

Akin to Sex Pistols’ God Save The Queen, Green Day’s American Idiot has often been wilfully misrepresented. Yes, both tracks were (and remain) incendiary punk classics, but in the same way that John Lydon didn’t actually call the Queen a moron, Billie Joe Armstrong wasn’t suggesting that all his fellow-Americans were cretins – rather, that mass media saturation in the US was helping to create paranoia among – and effectively brainwash – vast swathes of the country’s population. One of the best songs about America in the 21st century, its searing, pro-individuality stance hit a nerve, as American Idiot was nominated for four Grammy Awards and, as Kerrang! suggested, “did for Green Day’s generation and their country what Sex Pistols did for the United Kingdom in 1977”.

As with American Idiot, Born In The USA has also been misunderstood on a grand scale, though Springsteen inadvertently encouraged that by making it the title song of one of his biggest-selling records, and draping said album’s artwork in a Stars’n’Stripes backdrop. Born In The USA’s fist-pumping energy also ensured it was perfect for the live arena, and when Springsteen fans heard it performed to sell-out crowds, many took it to be a feel-good patriotic rock song. However, while Born In The USA is undeniably patriotic, it’s really a lament about the nation’s struggling blue-collar class. Portraying a heroic Vietnam War veteran as a tragic figure alienated by his own country after returning from battle, it really is anything but gung-ho.

Arriving in the wake of the colossal Purple Rain, Prince’s seventh album, Around The World In A Day, tends to be remembered for its flagship hits Raspberry Beret and Pop Life, but its final single, America, saw the Purple One take a well-aimed swipe at his homeland in the grip of the Reagan era. Referencing the twin threats of communism (“If the government turn over/It’ll be the only word that’s heard”) and nuclear war (“Nothing made Jimmy proud/Now Jimmy lives on a mushroom cloud”), Prince’s state-of-the-nation address was bang on point in those tense, pre-Glasnost days, and it still packs a punch as one of the best songs about America today.

After a run of almost deliberately esoteric albums during the 80s, Neil Young ended the decade on a high with Freedom: a diverse, yet satisfying record which reached its peak with the hard-hitting Rockin’ In The Free World. Reprising his Rust Never Sleeps tactic with Hey Hey, My My, Freedom contained both acoustic and electric takes on Rockin’ In The Free World, and while the amped-up version arguably has the edge, both takes represent Young at his fieriest and most committed. Lyrically, he was commenting on current events both at home (George HW Bush’s administration) and abroad (Iran’s Ayatollah Khomeini), but many of the issues Young rails against – among them homelessness and the state of the environment – have only intensified since Rockin’ In The Free World first took flight. Accordingly, whether we’re talking great protest songs or the best songs about America, this one’s right up there.