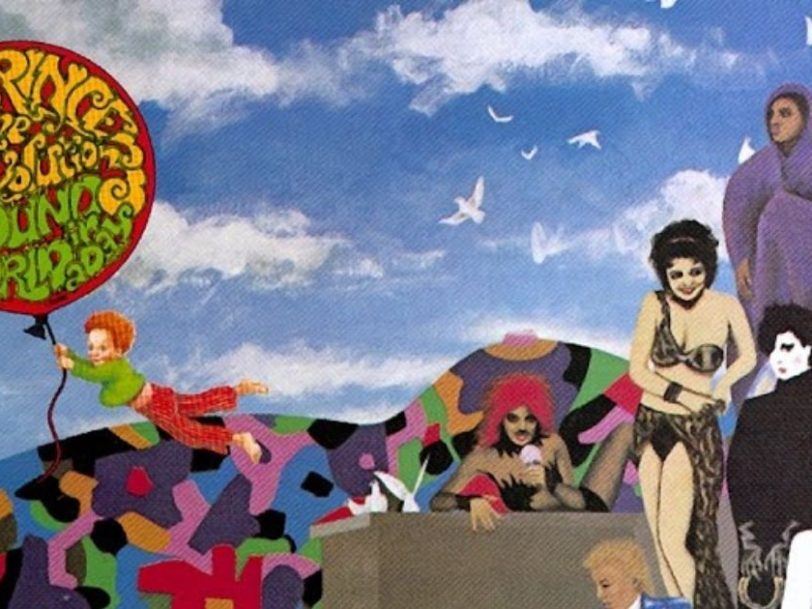 ‘Around The World In A Day’: How Prince Moved Beyond ‘Purple Rain’

The surprise follow-up to ‘Purple Rain’, Prince’s ‘Around The World In A Day’ album proved he was ‘the great Prince he wanted to be’.

Having recently taken his place among the best 80s musicians – and fast on his way to standing alongside the most influential musicians of all time – Prince had the world at his feet when his sixth album, Around The World In A Day, was released, in the spring of 1985. Hitting the shelves just weeks after the Purple Rain tour came to a close, the album came as a surprise following Prince’s announcement, only weeks earlier, that he was taking some time away from live performance in order “to look for the ladder”.

Listen to ‘Around The World In A Day’ here.

“It was a new beginning… he just had to keep working”

Around The World In A Day had, however, been ready for months. Working into the early hours of Christmas Day, 1984, Prince and his studio engineer Susan Rogers had finalised the album in a mobile recording unit parked outside his home. More interested in finishing the record than in celebrating the holidays, Prince was determined to move beyond the songs that had brought him worldwide fame, but which had begun to feel stale amid nightly concerts before audiences “who screamed just because that’s where the audience screamed in the movie”.

“He knew that Purple Rain was something that would always be there for him, but it wasn’t the gold watch at the end of a career,” Lisa Coleman, keyboardist in Prince’s then band, The Revolution, told this author for the book Lives Of The Musicians: Prince. “It was a new beginning… he just had to keep his head down and keep working if he was gonna be the great Prince that he wanted to be.”

Fuelled by his new-found fame and a boundless creative energy, Prince had begun recording Around The World In A Day before Purple Rain was even released. Calling his decision to keep moving forward “the smartest thing I did”, Prince told Rolling Stone, “I didn’t wait to see what would happen with Purple Rain. That’s why the two sound completely different.”

Another key reason for Around The World In A Day’s difference was Prince’s expanding group of collaborators. Having previously recorded the majority of his albums himself, he now began asking Lisa Coleman and Revolution guitarist Wendy Melvoin to work in the studio with him, encouraging them to add their own musical influences to his songs. With Wendy and Lisa bringing Brazilian and classical music to Prince’s attention, Wendy’s twin sister, Susannah, with whom Prince had begun a romantic relationship, also opened him up to classic rock bands he’d been aware of but never fully investigated, The Beatles and Led Zeppelin among them.

“We were very close and spent a lot of time together and nourished each other a lot,” Coleman explained in Lives Of The Musicians: Prince. “He trusted me and Wendy to work in the studio either with him or even when he wasn’t there.”

This intimacy shaped Prince’s new music in profound ways: in devising a harpsichord part that underpinned Raspberry Beret, Coleman defined one of the best Prince songs of all time; the array of instruments – oud, finger cymbals and darbuka among them – which gave Around The World In A Day’s title track its global flavour came courtesy of Coleman’s brother, David, who was happy to donate his original demo of the song to Prince’s new album, after he had worked it up during paid-for studio time received as a birthday present from Prince.

Though much of the album showed a pronounced psychedelic flavour drawn from the music Prince had been introduced to, Around The World In The Day could never be mistaken for the work of another artist: the sparse piano ballad Condition Of The Heart captured Prince at his most vulnerable and lovelorn, while Tambourine juddered with low, rumbling funk as Prince, “Falling in love with the face in a magazine”, finds himself “All alone by myself/Me and I play my tambourine”.

Eventually released as the album’s third single – after Prince reversed his original decision to keep promotion to a minimum, hoping that his true fans would find the record anyway – Pop Life proved that Prince could turn out finely polished radio-friendly pop-funk gems, but, with lyrics that scorned drug addition and promoted education, the song also hinted at an increasing awareness of social ills – something which would become more prevalent on later albums such 1987’s Sign O’ The Times and the following year’s Lovesexy. While paraphrasing the lyrics to another single, Paisley Park – soon to give his iconic studio complex its name – Prince revealed the inspiration behind that song’s kaleidoscopic, gently undulating search for utopia: “Paisley Park is in everybody’s heart… I was trying to say something about looking inside oneself to find perfection. Perfection is in everyone.”

With Around The World In A Day’s penultimate song, The Ladder, going some way towards explaining his earlier retirement statement as a search for “salvation of the soul”, the album’s closing song, Temptation, brought five minutes’ worth of pelvic-grinding funk to a close with a chastisement from a deep-voiced “God”, re-enacting an idea Prince had played out while touring Purple Rain. After the man who, just a few years before, had shocked the music industry with his Dirty Mind album concluded “Love is more important than sex”, he bade listeners farewell over an ominous soundscape and scrambling saxophone lines performed by one of The Revolution’s newest members, Eric Leeds: “Now I understand/I have to go now/I don’t know when I’ll return/Goodbye.”

Two months before its release, Prince had given his label, Warner Bros, a preview of the album at their head office, in Los Angeles, inviting his father, Wendy and Lisa, and Joni Mitchell – a longtime idol whose own expansive musical outlook could be felt on the record – along with him. Recalling the event for Lives Of The Musicians: Prince, former Warners exec Marylou Badeaux described concern from the promotion team that had, just a year earlier, fretted over radio’s reaction to When Doves Cry: having gotten their head around Prince’s Purple Rain sound, DJs wouldn’t expect something like this. Would they even play it?

“He doesn’t see that as his problem,” Badeaux replied. “He sees that as your problem. You didn’t think you were going to get Purple Rain 2, did you?”

Speaking to Rolling Stone, Prince countered the assumption that he should have repeated himself: “You know how easy it would have been to open Around The World In A Day with the guitar solo that’s on the end of Let’s Go Crazy, just put it in a different key?… I don’t want to make an album like the earlier ones. Wouldn’t it be cool to put your albums back-to-back and not get bored?”

With a riff that lifted from America The Beautiful, Around The World In A Day’s final single, America, was the closest Prince got to flashing the guitar pyrotechnics of Purple Rain. Its promo clip – one of the best Prince videos – was shot while on a break from filming his second feature film, Under The Cherry Moon, and captured an expanded Revolution in all their live glory, pointing the way to the revue-style shows he would stage in support of his Parade album the following year.

“I was making something for myself and my fans”

“I had a sort of F-you attitude,” Prince told Detroit DJ The Electrifying Mojo, following Around The World In A Day’s release, on 22 April 1985. “I was making something for myself and my fans, and the people who supported me through the years.”

Clearly, that fan base had grown: the album went double-platinum in the US, where it topped the Billboard Top Pop Albums Chart. It also went Top 10 around Europe, peaking at No.5 in the UK and hitting No.1 in the Netherlands and Switzerland. Most reviews picked up on the record’s superficial debt to psychedelia, with The New York Times calling it “ambitious, complex and stylistically diverse but at the same time a unified whole – a ‘concept album’ in the tradition of such 60s classics as The Beatles’ Sgt Pepper’s Lonely Hearts Club Band”. But Prince demurred. While he didn’t mind the comparison to other music from that era, allowing that it “was the only period in recent history that delivered songs and colours. Led Zeppelin, for example, would make you feel differently on each song,” he was also adamant that he was making modern music of his own: “The influence wasn’t the Beatles. They were great for what they did, but I don’t know how that would hang today.”

Rather than playing into the hippie-fied tropes of psychedelic rock – acid trips and “flower power”; winding improvisations performed to stoned audiences – Around The World In A Day “was meant to be more like a world album – like an international thing,” Lisa Coleman explained in Lives Of The Musicians: Prince. “It wasn’t, ‘Go into your head and do drugs.’ It was more like: ‘Get out in the world and meet people.’”