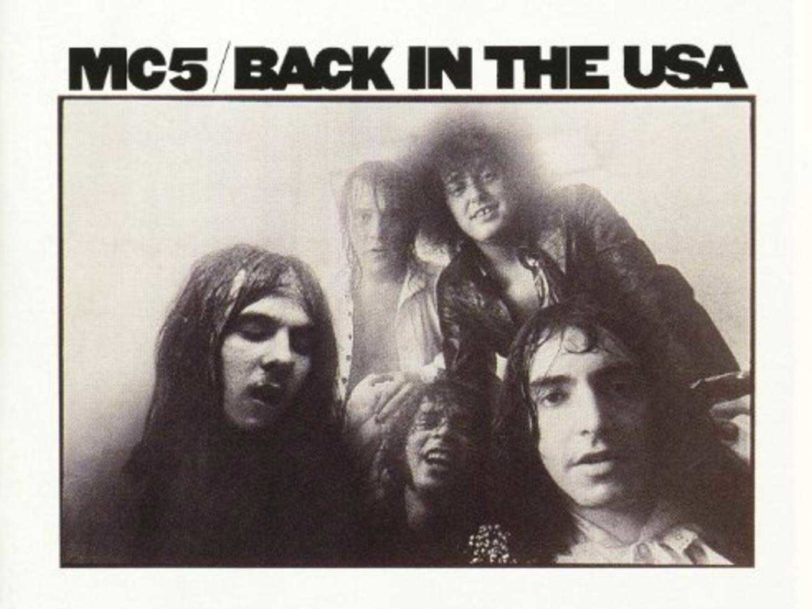 Back In The USA: How MC5 Invented Pop-Punk Ahead Of Schedule

Fusing rebellious proto-punk with radio-friendly pop, MC5’s ‘Back In The USA’ album opened a world of aggressive catharsis for the mainstream.

The 70s: disco and R&B dominated the charts; psychedelic rock became heavier, darker; jazz was in conversation with pop and socially-conscious funk; and punk was in its infancy. The LP was no longer just a collection of songs, it had a purpose, a message – and fans triumphantly carried their favourites from party to party. Connecting rebellion with the counterculture, and blazing a trail for punk rock years ahead of schedule, were MC5, the Michigan band whose second album, Back In The USA, hit the shelves smack-bang at the start of the decade, on 15 January 1970.

Listen to Back In The USA here

Released a year after their frenetic proto-punk debut, Kick Out The Jams, Back In The USA marked a new direction for a group whose opening call-to-arms caused no small amount of controversy. A mixture of pop tunes and deep blues riffs, it found them matching their rebellious stance to catchy songwriting, becoming the blueprint for something else entirely: pop-punk.

Pop-punk comes in many forms: in the late 70s to the late 80s it was the domain of erudite songwriters like David Byrne (Talking Heads) and Chrissie Hynde (Pretenders), and accessible, chart-friendly figures like Billy idol. In the 90s and early 00s, the likes of Green Day and blink-182 oversaw its rebirth as skate punk, before it found another lease of life in emo music.

Every strain of this combination of punk and pop music has produced some of the most iconic party tracks in history while offering an aggressive release that skirts some of punk music’s more anti-social aspects. It’s a deadly combination, and one that MC5 lit the touch paper for with Back in The USA.

The spirit of youth in revolt

Where Kick Out The Jams was a fast, messy live album that felt experimental while heralding the punk scene to come, Back In The USA was immaculately recorded, with a tight production suggesting how much rehearsal time must have went into creating it. They hadn’t let go of their revolutionary aesthetic, they’d just acquired the musicianship to match.

With short, memorable riffs and a greater use of vocal harmonies, Back In The USA showed the world that a radio-friendly rebellion could be a great recipe for success. With lyrics that combined themes of partying with those of finding confidence as a teenager, it captured the spirit of youth in revolt, while the use of pronouns in the lyrics ignited a feeling that the album was written for the listener alone.

Opening a world of acceptance

Producer Jon Landau doubtless had a hand in the band’s new direction. A former music critic who would go on to work with Bruce Springsteen, Landau had a natural instinct for pop-rock; dissatisfied with psychedelia’s lack of focus, he was drawn to MC5’s raucous energy, helping them channel it into a bluesy, catchy bubblegum-pop record that rolled party and rebellion into one. Meanwhile, nods to the original rock’n’roll pioneers of the 50s (in the shape of covers of Little Richard’s Tutti Fruitti and the Chuck Berry-penned title track) paid homage to the original youth culture that sent teenagers into a frenzy, while transplanting those songs to an era when rock music came of age.

The problem was: the audience. MC5 had already announced themselves as punk trailblazers almost a decade ahead of schedule. Their turn towards a cleaner, more mainstream sound turned off a fanbase interested in revolt over record sales, peaking at No.137 in the US – over 100 places lower than Kick Out The Jams. Long-term, however, Back In The USA opened up a world of airplay and mainstream acceptance, if not for the group (who split in 1972, after the release of their third album, High Time), then for anyone willing to combine anarchy and danceable pop music in the years that followed.

In hindsight, MC5 were greatly ahead of their time in terms of both the radical changes they made to their sound and template they laid for a whole new musical genre. The group have been nominated – and overlooked – for entry into the Rock And Roll Hall Of Fame on numerous occasions, but their true reward is that the collective consciousness of the pop-culture-loving world now know them as this: punk pioneers who became something so much more – a band that showed the way for forging aggressive catharsis with infectious pop music.

Kick out the jams with our best MC5 songs