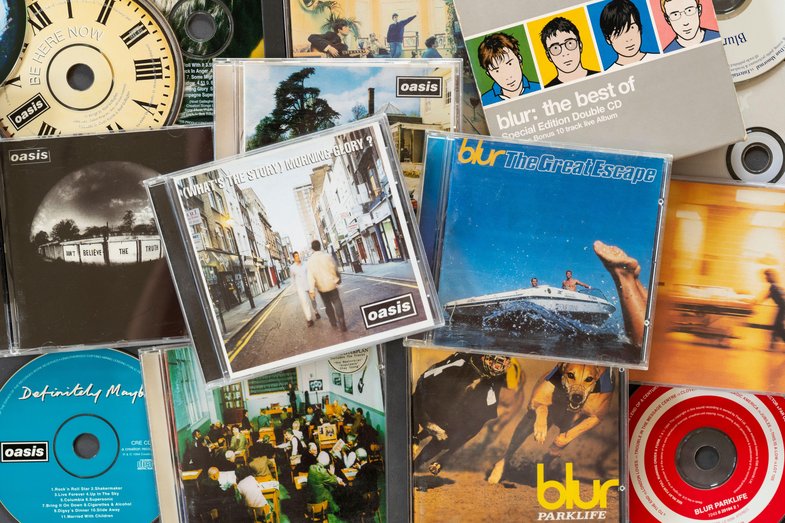 Blur Vs Oasis: The True Story Behind The Battle Of Britpop

The Blur vs Oasis battle became one of pop music’s greatest ever skirmishes. But who won the “Battle Of Britpop”?

For one week in August 1995, UK pop music caused a furore not witnessed since the height of Beatlemania. With the Britpop scene well on its way to peaking, its two biggest acts, Blur and Oasis, vied for supremacy by releasing their new singles on exactly the same day – and the entire country held their breath to see who would emerge victorious. Indeed, even if you weren’t interested in what became known as the “Battle Of Britpop”, it was impossible to avoid the Blur vs Oasis skirmish as it unfolded in the press.

“You couldn’t turn on a news programme without it being featured,” Andy Ross, co-founder of Blur’s label, Food Records, recalled in a 2015 NME interview. “My missus’ dad lives in Norway, and the Oslo Times had it on the front cover that week. If it was front-page news in Norway, it was probably front-page all around the world. Even America took notice. It was a focal point for a generation.”

Britpop would continue to dominate UK pop music for another two years after the Blur vs Oasis face-off, but it was never really a coherent “scene”, and its origins are difficult to pin down definitively. Broadly, Britpop can be viewed as a British retort to the Seattle-based grunge scene which made stars of US acts such as Nirvana, Pearl Jam and Soundgarden in the early 90s, its spearhead acts often overtly referencing British culture and putting emphasis on what NME referred to as a “youthful exuberance and desire for recognition” rather than the dourness and negativity synonymous with grunge and US alt-rock in general.

However, while Blur, Oasis and (to a slightly lesser extent) Pulp would become Britpop’s leading lights, the band who inadvertently launched Britpop were the talented but fractious London quartet Suede. Initially led by the brilliant but star-crossed team of vocalist Brett Anderson and Bernard Butler, the group’s self-titled debut album became the fastest-selling British debut in UK history on its release, and then Select magazine put them on the cover in April 1993 under the provocative headline, “Yanks go home!”

That same issue of Select also ran features on new, quintessentially English acts such as The Auteurs, Saint Etienne, Denim and Pulp, and the idea of a “Britpop” scene began to coalesce. Returning disillusioned from a dispiriting US tour in 1992, Blur also adopted a more traditionally English stance. Damon Albarn’s team began to namecheck UK groups such as The Kinks and The Small Faces in interviews, and their second album, Modern Life Is Rubbish, featured memorably English-slanted songs such as For Tomorrow and Sunday Sunday.

However, while Modern Life Is Rubbish attracted considerable acclaim, Blur’s third album, Parklife, elevated them to stardom. Shooting to No.1 in the UK, it again featured great songs tackling peculiarly English subjects ranging from Club 18-30 holidays (Girls & Boys) to the shipping forecast (the majestic This Is A Low), and its success arguably made Blur the UK’s most popular band in 1994.

“Blur just thought it was a game”

Oasis, however, quickly repudiated that claim. Led by the permanently feuding brothers Liam and Noel Gallagher, the mouthy Mancunian quintet made no secret of their love of British legends such as The Beatles and Sex Pistols. Released on Creation Records that summer, their debut album, Definitely Maybe, also hit a nerve with the British youth. Cementing the band’s meteoric rise, it also broke Suede’s record for the UK’s fastest-selling debut, on the way to going platinum seven times over.

Nonetheless, while the Gallagher brothers frequently fought with each other, they turned on their closest rivals early in 1995. Oasis had a couple of very public spats with Blur in the early part of the year – at the NME Awards and also at a party Oasis threw in London after scoring their first UK No.1 single, Some Might Say.

Speaking to NME 20 years later, Creation Records boss Alan McGee recalled: “Damon had come to their party [at the Mars Bar in Covent Garden], and Liam went up to him saying, ‘We’re No.1, you’re not, you’re not!’ So Damon got on one and decided to take Oasis on. Oasis, being Oasis, decided to hate them. And Blur, being Blur, just thought it was a game.”

“Britpop in general encouraged competitiveness, so it didn’t take much for Noel and Damon to rise to it,” Blur’s publisher Mike Smith added of the events that led to Blur vs Oasis spilling out into the press. “Both wanted to be the biggest band in the country. So much was made in the media of posh southern kids and rough working-class northerners. It was ridiculous, as none of the Blur boys came from those places. It was more a clash between art-school traditions and Oasis’ classic British R&B.”

Despite Oasis’ pugilistic attitude, it was Blur who threw down the gauntlet in what became known as the “Battle Of Britpop”, when Damon Albarn deliberately moved the release of Country House, the first single from Blur’s The Great Escape album, to clash with the release of Oasis’ Roll With It.

“We were gonna go the week after them, I believe, and they were going the week before us,” Alan McGee recalled. “Damon moved it, so we went head-to-head. Damon made it a big battle.”

“Damon and I had this chat, and I said, ‘Look, if we go the week after, we’re No.2, if we go the same week, we have a chance of maybe No.1,’” Andy Ross furthered. “So we looked at each other. Damon seemed up for it and we thought, Well, let’s go head-to-head, go for broke.”

Ironically, the songs both bands chose for the “Battle Of Britpop” weren’t necessarily their best. Though solid and dependable, Oasis’ Roll With It was essentially meat-and-potatoes fare, while Blur’s superior Country House came accompanied by a Benny Hill-esque video directed by the in-demand figurehead of the Young British Artists movement, Damien Hirst.

“Neither band was on their best form with the singles they were putting out,” The Charlatans’ frontman, Tim Burgess, recalled. “Country House almost seems like a novelty song when you look back at some of the heights Blur have scaled – and Roll With It is kind of a flatpack Oasis song.”

“I remember the band were slightly reluctant to have Country House as a single in the first place,” Andy Ross added. “They were also reluctant about the video with Keith Allen and Page 3 girls. But irrespective of how good the song was, it sounded like a No.1 single. It’s like having a big gun. I’m not saying it’s pretty or nice, but it’s effective. It’s certainly not the best song they ever did, or probably not the best song on the album, but it served a purpose. The person who scored the goals isn’t necessarily the best player on the pitch.”

Outwardly, both parties approached the confrontation with confidence and swagger, but the outcome wasn’t a done deal by any means.

“Everybody thought Oasis would win,” Mike Smith recalled. “We felt we could win, but that wasn’t the perception out there.” Things were “tense” within the Blur camp right until the results come in on Sunday evening.

“People were buying a record to beat another record”

Having stoked the flames of the Blur vs Oasis media frenzy, the NME readied two different covers “because we didn’t know who was going to win”, the magazine’s then editor, Steve Sutherland, added. “We had a Blur one and an Oasis one, and we just waited to see which one would go. It did feel like people were going into record stores and buying a record to try and beat another record, which is amazing.”

In the end, Blur triumphed. Despite claims that Oasis’ sales were hit by faulty bar codes, Country House shifted 270,000 copies while Roll With It sold 220,000. Rewarded with their first No.1 single, Blur were duly crowned champions of the “Battle Of Britpop” on 26 August 1995, but it was a pyrrhic victory for some.

“I would have liked to have had a No.1 quietly, but there’s probably no such thing as that,” Graham Coxon said in a September 1995 interview.

“I wanted our band to be No.1 just because No.1 is a special thing, but it’s become not special. I wish the releases had been staggered, then Oasis would have got to No.1 as well. We don’t need this fake war, this preposterous chart war.”

“All the best bits of what Blur are about”

Ultimately, though, you could argue that both bands emerged victorious. In the aftermath of the “Battle Of Britpop”, both Blur’s The Great Escape and Oasis’ (What’s The Story) Morning Glory albums became massive sellers, and Britpop grew into a cultural phenomenon. Some might say that it continued to build until Oasis headlined Knebworth in 1996, but for many it’s defining moment was the Blur vs Oasis clash of August 1995.

“With hindsight, Country House was the obvious track to go for,” Blur producer Stephen Street reflected in 2015. “I actually think it’s a very well-crafted song. I always thought the “Blow me out/I am so sad/I don’t know why” at the end is a great bit of songwriting. And it seemed to cram into three-and-a-half minutes all the best bits of what Blur are about.”

Head to the Dig! store to buy Blur vinyl and more.