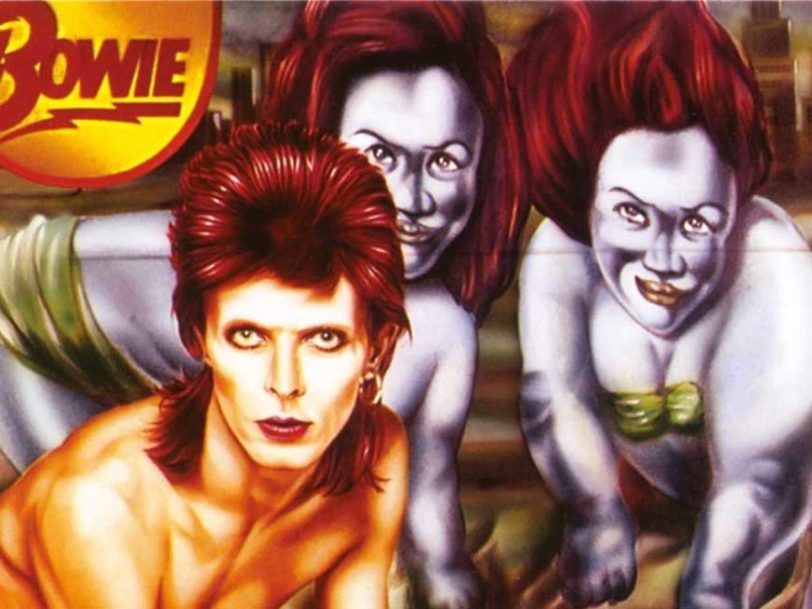 An amalgam of glam-rock, proto-punk aggression and a jarringly Orwellian worldview, David Bowie’s ‘Diamond Dogs’ album is still the bollocks.

The fact we’re still discussing it almost 50 years later shows how seismic an event it was when David Bowie “retired” his Ziggy Stardust alter-ego and broke up his group The Spiders From Mars onstage at London’s Hammersmith Odeon in July 1973. However, in making such a grand gesture, Bowie was taking a significant risk. He had no master plan up his sleeve, so took a detour with the covers album Pin Ups while formulating what would become his next fully fledged studio album, Diamond Dogs.

“He wasn’t quite sure what he wanted to do”

That Bowie hadn’t yet mapped his future out was apparent to insiders in his camp while he recorded Pin Ups. During these sessions in the late summer of 1973, guitarist Mick Ronson recalled, “David had all these little projects… but he wasn’t quite sure what he really wanted to do.”

The “projects” Ronson referred to included Bowie’s interest in adapting George Orwell’s influential 1949 novel, Nineteen Eighty-Four, into a rock musical, for which he began writing material before the Pin Ups sessions wrapped. However, while this putative idea was nixed when Orwell’s widow denied him the rights to the novel, Bowie ended up writing a concept album of sorts: an apocalyptic urban scenario influenced by Orwell, Anthony Burgess’ A Clockwork Orange and the works of another firm Bowie favourite, postmodern US author William S Burroughs.

“It was a precursor to the punk thing”

Accordingly, you could argue that Diamond Dogs was the logical extension of 1973’s Aladdin Sane, as many of its best songs delved ever deeper into that previous album’s dystopian themes. With hindsight, the record also envisioned the coming of punk – especially the pounding title track, which introduced Halloween Jack, a character whose decadent, shock-haired visage could have belonged to an alternate-reality version of Ziggy Stardust.

The “Diamond Dogs” were “all little Johnny Rottens and Sid Viciouses, really”, Bowie later explained. “In my mind… they were these gangs of squeaking, roller-skating, vicious hoods with Bowie knives and furs on, and they were all skinny because they hadn’t eaten enough, and they all had funny-coloured hair. It was a precursor to the punk thing.”

Having made the break from The Spiders From Mars, Bowie was keen to forge new musical partnerships on Diamond Dogs. From his recent past, he retained the services of virtuoso pianist Mike Garson and drummer Aynsley Dunbar (both had appeared on Pin Ups), while bassist Herbie Flowers had previously worked with Bowie on Space Oddity and also on Lou Reed’s Transformer album, which Bowie had produced in the summer of 1972. Further continuity was provided by the return of Tony Visconti for string arrangements and mixing duties, but Bowie said goodbye to his long-term producer/engineer Ken Scott and guitarist Mick Ronson – both of whom had played major roles in shaping his career since the turn of the 70s.

“A stunningly bleak glimpse into the abyss”

Ronson’s absence also forced Bowie to take on most of the guitar duties on Diamond Dogs himself. As he recalled in a 1997 Uncut interview, he practiced every day, knowing the “guitar playing had to be more than OK”. The effort was worth it, though, for Bowie’s prowess made all the difference on the album’s signature hit, Rebel Rebel: a thrilling celebration of androgyny (“You got your mother in a whirl/She’s not sure if you’re a boy or a girl”) driven along by a stomping beat and Bowie’s memorable cyclical guitar riff.

Infectious and extremely radio-friendly, despite its risqué lyric, Rebel Rebel went Top 5 in the UK and remains one of the Bowie’s finest singles. It was, however, considerably poppier than the rest of Diamond Dogs, though what the album perhaps lacked in immediacy, it more than made up for in terms of sonic derring-do.

Bowie biographer Nicholas Pegg later described side one’s suite-like trio Sweet Thing/Candidate/Sweet Thing (Reprise) as “a stunningly bleak glimpse into the abyss”. Even encountered now, it is both riveting and forbidding, with the mood shifting dramatically from elegant baroque balladry to hectoring proto-rap and yearning romanticism across the three tracks’ composite ten-minute span.

Add that remarkable triptych to Rebel Rebel and the enthralling title track, and Diamond Dogs would have done plenty to distinguish itself, but to Bowie’s credit, the innovation just kept on coming. Both We Are The Dead and the stirring Rock’n’Roll With Me exude noir-like intrigue, while 1984 – with its Shaft-esque wah-wah guitars and swirling orchestrations – foreshadowed the funk and soul leanings of Bowie’s next studio album, Young Americans Even Diamond Dogs’ eerie denouement, Chant Of The Ever Circling Skeletal Family, sounded both exhilarating and futuristic.

“David asked if I could capture the word “brother” at the end of that last track and repeat it ad infinitum,” Tony Visconti later revealed in an interview with Red Bull Music Academy. “Of course I could, but that short word was too long for the puny memory banks in the machine, as storage was very limited in those pre-sampling days. So I managed to capture just ‘bro’ with a snare drum hit, and that actually sounded amazing, like a robot with AI that was not working very well singing it.”

“The finest he’s made so far”

Following its release, on 24 May 1974, critics agreed that Diamond Dogs found Bowie leading the pack in style, with Sounds suggesting, “Where Aladdin Sane seemed like a series of Instamatic snapshots taken from weird angles, Diamond Dogs has the provoking quality of a thought-out painting that draws on all the deeper colours.” Elsewhere, Disc felt the album was “without doubt the finest he’s made so far”. Famously, Diamond Dogs also created a frisson of controversy thanks to artist Guy Peelleart’s cover painting depicting Bowie as a striking half-man, half-dog figure. One of the most memorable David Bowie album covers, the original gatefold sleeve showed the hybrid character’s full genitalia – at least until RCA thought better of it and airbrushed the them out.

Bowie’s ever-swelling fanbase, meanwhile, was thrilled by both the cover and the record’s contents. Greeting the album as the proverbial dog’s bollocks, they collectively sent it to No.1 in the UK and into the US Top 5, its stateside success assisted by billboard campaigns in New York’s Times Square and on Los Angeles’ Sunset Boulevard, plus extensive magazine ads and one of the earliest TV commercials promoting a pop record.

David Buckley, author of Strange Fascination: David Bowie: The Definitive Story, later asserted that Diamond Dogs was “cinematic in scope, breathtakingly audacious in execution” – and it absolutely is. For Bowie, however, it was merely another entry in a peerless artistic roll which would soon lead to more era-defining titles including Young Americans, Station To Station and Low.