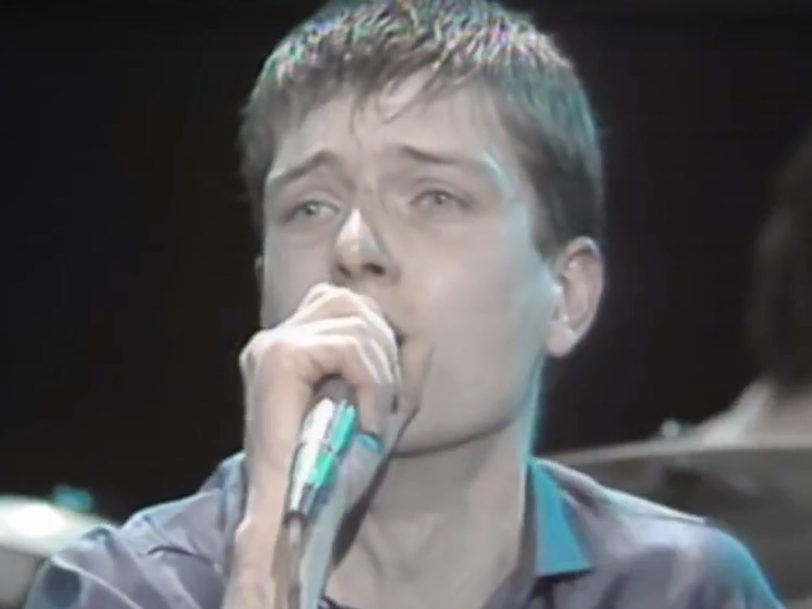 When Joy Division vocalist Ian Curtis took his own life, he posthumously gained the iconic status attributed to most rock’n’roll stars who die prematurely. Yet, in so many ways, he didn’t fit the profile. He was certainly an integral part of an acclaimed, future-shaping band whose star was in the ascendant but, unlike Jimi Hendrix, Jim Morrison, Janis Joplin, Kurt Cobain and their ilk, Curtis didn’t “live fast”. He had a wife and a young daughter at home, yet he was torn apart by the guilt he suffered from his extra-marital affair, and the only drugs he took were prescribed for his worsening epileptic condition.

Listen to the best of Joy Division, here.

Tragically, Curtis never resolved the problems he faced in his private life, and was just 23 when he hanged himself at home on Sunday, 18 May 1980 – the day before he was due to meet his bandmates at Manchester Airport and fly to New York City, where Joy Division were to begin their first US tour. With hindsight, he’d already laid his soul bare in the lyrics he’d written for the group’s second album, Closer, but that record wouldn’t be released for another two months and, while his girlfriend, Annik Honore, had warned Factory Records’ boss, Tony Wilson, that Curtis “means what he’s saying”, everyone else in the singer’s immediate orbit were unaware of his intentions.

“There was never a moment when I was with Ian when he acted anything but normal,” Joy Division bassist Peter Hook told Uncut in 2018. “He never, ever led me to believe for one moment that he was depressed. He never let you know what he was feeling, really. Whether that was bravado or foolishness, the thing you most wanted to hear in the world was that he was OK.”

Hook, guitarist Bernard Sumner and drummer Stephen Morris have frequently expressed similar thoughts in interviews down the decades, but the fact remains that Ian Curtis made the decision to turn his back on life. When he died, he left behind just two official albums and a handful of singles. Yet quality always beat quantity where Ian Curtis was concerned, and it’s not hard to see (or hear) why successive generations are still enthralled by his work.

“He had the plan and the rest of us were his tools”: an ideal for Joy Division

Curtis’ reputation rests upon Joy Division’s recorded legacy – and there’s no doubt that’s something to behold, especially when you consider the speed at which the group evolved. Though essential to their development, the band’s first, self-released EP, 1977’s An Ideal For Living, was streaked with the rudiments of punk, yet within three years, Joy Division had crafted two majestic albums, Unknown Pleasures and Closer: landmark records cited as influences by artists ranging from U2 to Mark Lanegan and Interpol, and which defined British post-punk and changed the course of music forever.

It’s also important to note that Joy Division were entirely democratic in their approach, and that all four members played vital roles in the group as their career evolved. Yet while Curtis was always reluctant to be singled out as the driving force, his artistic vision was central to his band’s rapid evolution. A dedicated music fan with catholic tastes, Curtis had a great ear, and when his bandmates were jamming, he was invariably the person who spotted the riffs and melody lines which would underpin the best Joy Division songs, ranging from She’s Lost Control to Love Will Tear Us Apart.

“Musically, he’d introduced us to loads of new stuff – Kraftwerk, Throbbing Gristle, Velvet Underground, The Doors, Can and Faust,” Peter Hook wrote in his memoir, Unknown Pleasures: Inside Joy Division. “And when it came to the direction of the band, he was always the most forthright. He had the plan and the rest of us were his tools to carry it out, if you like.”

“His feelings were all there”: lyrics and inspiration

Curtis also attended Joy Division rehearsals with notebooks crammed with lyric ideas. He’d been a voracious reader since he was a child and he’d lost himself in literature, usually leaning towards fiction of a dystopian bent. Those influences seeped into many Joy Division song titles, from Atrocity Exhibition (JG Ballard) to Colony (Franz Kafka) and Dead Souls (Nikolai Gogol) – and when Curtis absorbed them into his own concise yet erudite style of writing, he emerged as a fully fledged lyricist with enormous potential.

“We grew up watching pop programmes on TV as that was part of the era – the rock star aspect,” Curtis’ widow, Deborah, told The Guardian in 2014. “At the time, poetry was considered old-fashioned. It seemed like a logical progression to put it to music. I don’t think the fame and life on the road suited Ian very well. I think he would have continued to write even if he didn’t want to perform. When he got to 40 or 50 he could probably have written a terrific book.” But though his words were often elegant and related with a deft, poetic twist, it’s hard not to discern the deep unhappiness and loneliness in the best Ian Curtis lyrics.

In her memoir, Touching From A Distance, Deborah relates how shocked she was to hear Ian sing the lines “A loaded gun won’t set you free/So you say” on Unknown Pleasures’ New Dawn Fades, but when she confronted her husband about them, he refused to discuss it and simply walked out of the house. Later, circumstances prevented Deborah from hearing Closer until the record was released, but when she did hear Curtis’ hauntingly beautiful, yet painfully intimate reflections, she realised, “His intentions and feelings were all there within the lyrics – such a sensitive composition would not have happened by accident.”

By extension, Ian Curtis also used Joy Division’s cathartic live shows to obliterate any remaining emotional distance between himself and the listener. Offstage he was mostly friendly and approachable, but onstage he became a man possessed – his intense vocal delivery and manic dancing capable of mesmerizing his audience.

“Live, Joy Division were heavy,” author and journalist Jon Savage recalled in an interview with The Guardian. “Performers – and David Bowie is a good example – know exactly what to give and what to withhold, but Ian Curtis didn’t have that stagecraft. He just came on and gave everything. I didn’t know about his epilepsy at the time, but when I saw them at The Factory [in Manchester] in April 1980, it was so intense, I had to leave. Ian was for real, and that intensity was ferocious.”

Savage’s assertion that Ian Curtis was absolutely the real deal has only gained traction during the four decades since he died, and it’s endorsed by many of those who have been inspired by him down the years.

“Ian is a major influence – he is my favourite frontman”: influence and legacy

“Unknown Pleasures is one of my most played records,” The Charlatans’ Tim Burgess told The Guardian in 2019. “When I used to listen to it through headphones, it used to put me in a trance. One of my first bands was called Interzone [after the Joy Division song], and we did a cover of New Dawn Fades. Ian is a major influence as a singer and lyrically – he is my favourite frontman.”

In the same interview, Burgess also revealed that he had the tattoo “FAC33” – the catalogue number for Ceremony, a song written by Joy Division and recorded by New Order, the group that formed out of Joy Division’s ashes – on his shoulder bone, as “it’s recognising something I carry with me forever”.

Ian Curtis and Joy Division’s work exudes this same enduring quality, which ensures that it continues to burrow into the wider consciousness. In recent times, the singer has inspired everything from Anton Corbijn’s award-winning 2007 biopic, Control, through to selection by artist Peter Blake as one of the British icons to appear in a 2012 update on The Beatles’ Sgt Pepper’s Lonely Hearts Club album cover.

“They are still right up there”

“Most pop music is about distant emotion, but Ian wanted to go very deep, and the band went deep with him,” Jon Savage reflected in 2019.

“Equally, I’m afraid the idea of the ‘tortured poet’ and dying young is ingrained in the idea of the teenager, so Ian’s suicide ticks the boxes of a romantic hero. But at the same time, it’s a mistake to think Ian and Joy Division were doomy. Their music’s poised between the light and dark – and somehow outside of time. Forty years on, they are still right up there.”

Check out our best Joy Division songs for Ian Curtis’ most inspirational moments.