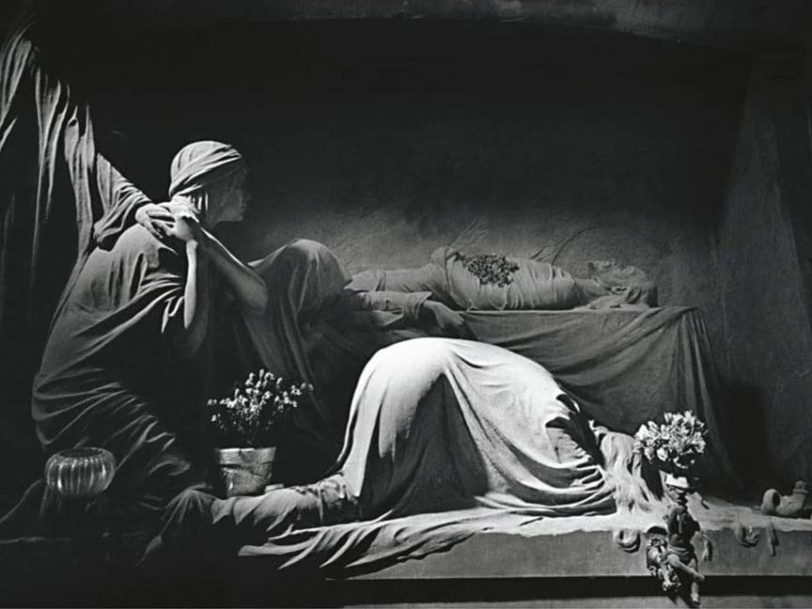 Closer: The Triumph And Tragedy Of Joy Division’s Final Album

In retrospect, Joy Division’s second album, Closer, created its own myth before it was even released. Though the album sessions (which also included the recording of the three songs that would make the free Komakino flexi disc, released on the same day as Closer) wrapped by the end of March 1980, it wasn’t issued until 18 July of that year – exactly two months after the band’s charismatic vocalist, Ian Curtis, committed suicide.

Inevitably, this tragic event has overshadowed the record’s subsequent reputation. Though the reviews were almost uniformly positive, they veered towards the ghoulish, with Dave McCullough’s five-star Sounds critique (which noted the music was “the aural equivalent of a rich marble slab, as luxurious and as poignant as the stony antique death image that adorns the sleeve”) typical of the florid response from the press. Consequently, while Closer peaked at No.6 on the UK charts – becoming Factory Records’ first Top 10 album – its success brought the coldest of comfort for Joy Division’s remaining members.

“It broke my heart”

“I can’t really remember anything,” Peter Hook later told Uncut of that period. “The only thing I do remember was sitting in my car one morning. I went to tax my car at a place in Stretford [in Manchester]… I was listening to the Top 20 on the radio, and they went: ‘New in at No.13, Love Will Tear Us Apart by Joy Division…’ It broke my heart. It was things like that which brought home to us what we’d lost. It was awful.”

Time, of course, affords a little more perspective, which is necessary where Closer is concerned. Indeed, after admiring it from the distance of four decades, the realisation that it would still have been hailed as a masterpiece had Ian Curtis lived hits hard – and only adds to the poignancy when revisiting it now.

However, as stark and emotionally compelling as Closer remains, its creation wasn’t anything as melodramatic as the myths surrounding it lead us to believe. In the immediate aftermath of recording their debut album, Unknown Pleasures, the band had already written key Closer numbers such as Atrocity Exhibition and Colony during the summer of 1979, and they’d performed early versions of most of the new album’s tracks during their European tour in January 1980. As Bernard Sumner recalled in an interview with Uncut, Joy Division were in an upbeat mood as they prepared to record their second album.

“We were on the cusp”

“It was a pleasurable time, but with a certain uncertainty about Ian, because of his health,” Sumner recalled, noting the group’s concern over the singer’s epilepsy. “We’d finally got where we were aiming for, and America was beckoning. We were on the cusp, we were fantastic live.”

Joy Division were also excited because recording Closer meant decamping to London for a three-week spell. While they’d played numerous successful shows in the capital, they’d never been away from Manchester for such a protracted period for recording purposes. The Closer sessions also granted them 24-hour access to Islington’s Britannia Row: a state-of-the-art complex owned by Pink Floyd and famed for its fantastic ambience.

“The desk was kind of old-fashioned, but the sound was phenomenal,” Sumner remembered. “The sounds of the speakers were a lot of the inspiration for the sonics on Closer, and also a big part of the sonics on [New Order’s] Blue Monday, which we made in the same studio. The room sounded fantastic; I’d never heard bass like that before.”

“We used sequencers on the more dreamy tracks”

Though Ian Curtis recorded his vocals separately, Britannia Row’s acoustics encouraged producer Martin Hannett to capture Joy Division performing most of Closer’s backing tracks live in the studio. This approach was ideal for the album’s more abrasive, guitar-based tracks such as Colony, the robust A Means To An End and the harsh, metallic Atrocity Exhibition.

The ever-mercurial Hannett also encouraged the band’s interest in electronics, which – when aligned with a newfound freedom to experiment in the studio – led to an increased usage of synthesisers on Closer.

“We messed about with ambient noises on Unknown Pleasures, but I don’t think we had any keyboards then,” Bernard Sumner said in 2018. “For Closer, Martin brought a big ARP modular synthesiser in, which sounded great, but it’d take him a day to get a bass drum sound on it.”

“Martin was a bastard when he felt it wasn’t going well,” Peter Hook added. “But on Closer, he was at his best. He introduced us to sequencers, which we used on the more dreamy tracks.”

Post-Joy Division, Sumner, Hook and drummer Stephen Morris would fully integrate synthesisers and sequencers into their sound with New Order, but Closer marked the point where they first became hip to the possibilities offered by electronica. Indeed, synthesisers (mostly played by Sumner) were integral to several of the album’s most enduring tracks, such as Heart And Soul, the sparse, otherworldly The Eternal and the hauntingly beautiful Decades.

These songs also provoked sublime performances from Ian Curtis, who was at the very peak of his form on Closer. With bitter hindsight, however, Curtis’ most revealing lyrics, such as “I’m ashamed of the things I’ve been put through/I’m ashamed of the person I am” (Isolation) or “Existence, well what does it matter?/I exist on the best terms I can” (Heart And Soul), made it plain that the singer – who had made an initial suicide attempt in April 1980 – was in an extremely bad place. Yet his bandmates, though aware of his epilepsy and his affair with girlfriend Annik Honoré, never realised their friend was in such dire straits.

“I honestly thought Ian’s lyrics were really brilliant, but that he was writing about somebody else,” Stephen Morris reflected in 2018. “That’s how naïve I was. I thought it was brilliant how he could get in the mind of somebody else. Even after he attempted to commit suicide, it didn’t seem that he was that hellbent on destruction.”

“We won’t have it again”

Sadly, the feelings which provoked the intensely personal lyrics Curtis penned for Closer were all too real for Ian Curtis, and, on the eve of Joy Division’s first US tour, just six weeks after the album sessions wrapped, he took his own life. His tragic actions inevitably coloured the initial response to his band’s final record, yet, four decades later, Closer has more than proved itself on artistic merit. For once a record deserving of the overused adjective “seminal”, it’s a post-punk masterpiece, but it also exudes a dignity and sophistication rare for a rock record – and that renders it timeless.

“I shouldn’t say it really, because I was in the band, but I love this album,” Peter Hook wrote in his memoir, Unknown Pleasures: Inside Joy Division. “If you listen to Unknown Pleasures, there’s a bit of reticence on some songs, but not on Closer. Even though much of the music is very melancholic, fragile and intense, every song is confident. Listening to it now, you can hear how well we played together. The solidity between me, Ian, Steve and Bernard was very, very powerful. I don’t think any of us will ever have it again.”

Check out our best Joy Division songs to see which ‘Closer’ tracks made the cut.