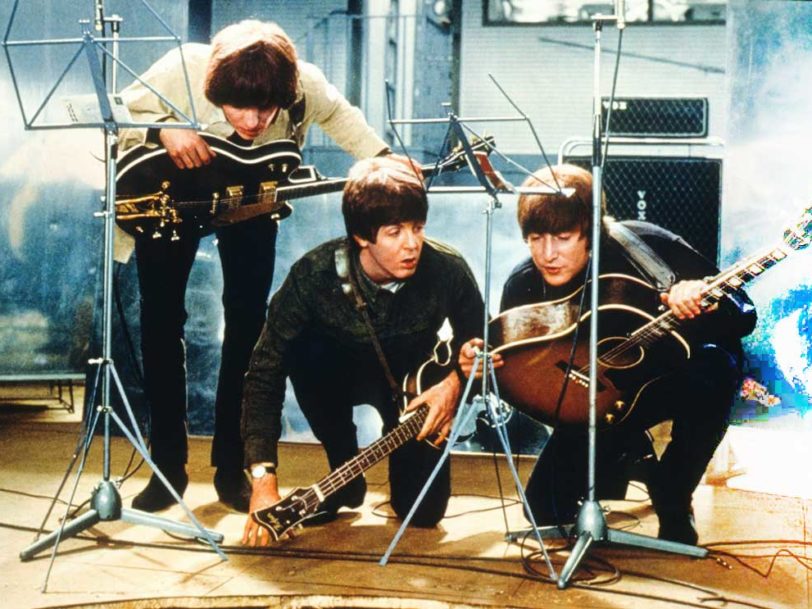 Building The Beatles: How The Fab Four Really Found Success

Though undeniably creative in their own right, The Beatles found fame and success through a mix of talent and historical luck.

When you hear about the groundbreaking albums, the astonishing sales figures and the cacophonous concerts packed with screaming teenagers, a great many stories regarding The Beatles often make it seem as though their enormous success was inevitable, somehow preordained or written in the stars. Their evolution from writing three-minute pop confections to order, to pushing sonic boundaries and embracing psychedelia and the avant-garde, all seems like it had always been there, waiting to be unlocked by John Lennon and Paul McCartney, the ones who held the key. This is reinforced by the standard view of The Beatles as the unquestioned Best Band Ever, Full Stop, expounded by (almost entirely white, male) music journalists ever since the group first shook their moptops.

A cursory examination of their blazing career trajectory reveals a much more complicated phenomenon. When they started out, The Beatles entered a pop music landscape in which longevity was for crooners or balladeers, and where rock’n’rollers – while in some cases hugely popular – were still regarded as something of a novelty. Even artists with the instant notoriety and cultural cachet of Elvis Presley were expected to wind up in the movies or stage Las Vegas revues within three to five years at the most. The music industry simply didn’t have the infrastructure – or motivation – to help a band maintain a pop career beyond a few years of hitmaking, let alone record more than a dozen albums that engendered a wholesale cultural revolution.

It wasn’t just that The Beatles’ success was remarkable: the very nature of that success was entirely unprecedented. The reason they were able to sustain their artistic and commercial achievements throughout a decade of exceptional cultural upheaval, however, was their constant drive to innovate, which meant that their own evolution was inextricably linked with those wider societal developments. The group’s initial run of masterpiece singles – She Loves You, I Want To Hold Your Hand, Can’t Buy Me Love – heralded the British Invasion of the US charts. As other bands tried to keep up, The Beatles remained streets ahead of their competitors in the middle of the decade, with the 1965 albums Help! and Rubber Soul. Two years later, their acid-tinged psychedelic masterwork, Sgt Pepper’s Lonely Hearts Club Band, soundtracked the Summer Of Love.

As faith in the hippie ideal dissolved at the end of the 60s, The Beatles again led the way with the fractured smorgasbord of The Beatles, aka “The White Album”. The requiem for the decade itself – one which had seen significant liberations in the socio-political realm – came with the Abbey Road and Let It Be albums.

The Beatles seem to have realised the unique position they had acquired very early on, and used their platform to challenge their fanbase rather than spoon-feed them. Ever since, this has been the true mark of real artistry in the field of popular music – that essential aspect which elevates all art above mere entertainment.

As the key creative force in the group’s early years, Lennon and McCartney credited their audience with the intelligence and inquisitiveness to follow them down the new paths they were forging. While this journey was in some respects a fortunate dovetailing with the commercial growth of the long-playing record in the middle of the 60s – which allowed for the concept of the album to evolve into a blank canvas for artistic statements, rather than churned-out mixtures of covers and original singles – none of this was a foregone conclusion in terms of success. Outside of jazz, it hadn’t been done.

A matter of historical luck

By dropping acid and turning out otherworldly psychedelic music inspired by The Tibetan Book Of The Dead (check out Revolver’s closing track, Tomorrow Never Knows), The Beatles took a tremendous risk in terms of their brand as teen idols – and were rightly rewarded for doing so. Buddy Holly And The Crickets may have already established the concept of the self-generating, self-contained “band” that wrote and recorded its own material – and, yes, Lennon and McCartney may have taken a lot longer to move on from the basic boy-meets-girl, love-song paradigm if they hadn’t met Bob Dylan in 1964 and started dabbling in mind-altering substances – but by consistently acting as a unit, with each individual able to bring ideas to the table in order for the band to act collectively upon them, The Beatles pretty much single-handedly brought about the concept of the band-as-gang. In doing so, they were able to break new ground and insist upon creative freedom in a way that solo artists like Elvis could not. Backed up by sympathetic, able and intelligent foils in the shape of manager Brian Epstein and producer George Martin, they did all this extraordinarily quickly.

While they no doubt had incredible agency of their own, one critical factor in The Beatles’ success, from which they benefitted massively but which was also a matter of historical luck, was structural. Britain’s abolishment of compulsory national service, in 1960, meant that the teenage McCartney, Lennon and George Harrison (plus original drummer Pete Best) were able to find each other and nurture their fledgling creativity, rather than being shipped off to various military bases for two years. As the decade wore on, they were also fortunate to hit their stride just as the first wave of comparatively prosperous post-World War II baby-boomers reached their teens, becoming a ripe, untapped marketing demographic all unto themselves.

There was also the matter of Britain’s media in the early 60s, and the comparative lack of choices for consumption. It’s much less likely The Beatles would have made as big an impact if such a massive range of entertainment as exists today – endless TV channels, video games, social-media feeds – were vying for audiences’ attentions back then. In a society that had only recently gotten used to the end of rationing, and where practically all economic activity ceased every Sunday, Britain’s teenagers were, to all intents and purposes, a unified, captive audience with a natural receptivity. And it certainly didn’t hurt that The Beatles were a photogenic and charismatic presence in newspapers and on screens.

“They’ll never be as big as The Beatles”

When people roll out the “they’ll never be as big as The Beatles” remark in response to new, hyped bands, they’re correct, but also miss the point. Our increasingly fractured and atomised media, combined with consumers’ ever-more divided and diminished attention spans, literally mean that no cultural phenomenon of any description, let alone a group of musicians and songwriters, can even hope to hold our attention so singularly and for so long ever again. In generating the largest demand for a concert in British history for their Knebworth Park gigs in 1996, the only band that has conceivably come close to The Beatles’ mass appeal has been Oasis. That the Gallagher brothers’ career has been built upon Fab Four-worshipping and imitation speaks volumes to what helped Oasis seize the popular imagination to the extent they did.

So, while a great deal of The Beatles’ success is attributable to their immense and undeniable talent, at least a part of how big they became was a question of historical serendipity. They were the right band for the right place and time.

Are The Smiths’ the most important British band since The Beatles? Check out their legacy and decide for yourself.