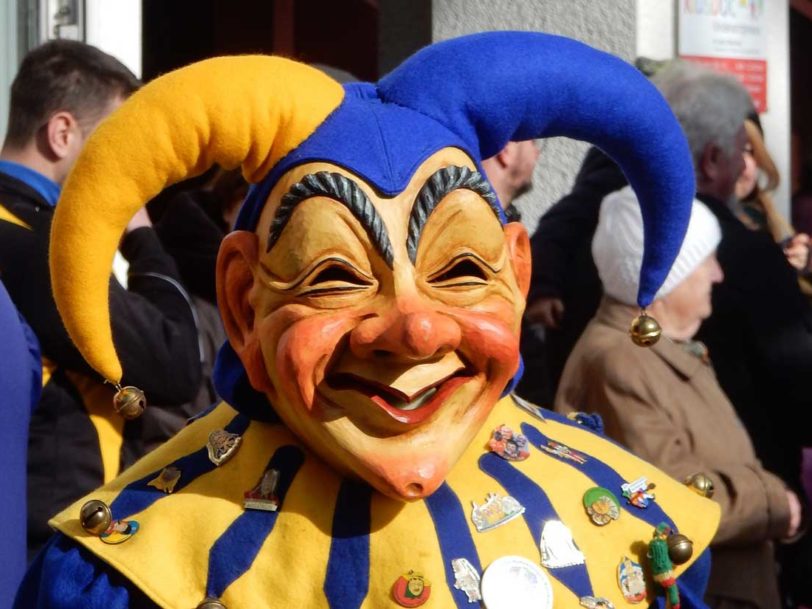 Fool’s Gold: The 10 Best Songs With “Fool” In The Title

Whether singing of a lost love or humanity’s demise, the best songs with “fool” in the title are perfect for April Fool’s Day and beyond.

April Fool’s Day is unlike most significant calendar events. It’s celebrated on 1 April in most countries around the world, yet it’s not actually a public holiday – except in the Ukrainian city of Odessa, where everyone officially gets the day off. Nonetheless, we’re well aware of April Fool’s Day, as it gives us permission to play practical jokes on other people – or for them to prank us. Here, then, are the ten best songs with “fool” in the title, to soundtrack your next acts of mischief – or those moments when you feel you’ve been had.

10: The Doobie Brothers: What A Fool Believes

Michael McDonald brought a love of soul music to The Doobie Brothers’ mainstream rock sound when he replaced founder member Tom Johnston in 1977. He also co-wrote their enduring 1979 hit, What A Fool Believes, with Kenny Loggins. The song’s regretful lyric concerned a man reuniting with an old love interest only to discover their romance existed purely in his head (“She musters a smile for his nostalgic tale/Never coming near what he wanted to say/Only to realise it never really was”), but its universal theme struck a chord and the song rose to No.1 on the Billboard Hot 100, even though its smooth pop veneer went against the grain in a year when disco dominated the US airwaves.

9: Whitesnake: Fool For Your Loving

Sadly for David Coverdale, the failure of his first marriage provided the inspiration for Whitesnake’s breakthrough hit, 1980’s anthemic Fool For Your Loving. On the upside, the personal nature of the lyric (“I’m a lonely man who knows just what it means to lose control”) coaxed out one of the former Deep Purple frontman’s most soaring performances, and Fool For Your Loving’s neat pop sensibility sent the song to No.13 on the UK charts, ensuring its place as one of the best songs with “fool” in the title. In its aftermath, Whitesnake’s third album, Ready An’ Willing, went Top 10, bagged the band a gold disc and established them on the world stage.

Nobody was more surprised than Chris Rea himself when his song Fool (If You Think It’s Over) became a huge US hit in 1978. The British singer-songwriter had envisaged it as a Memphis soul song, and he originally had Al Green in mind to sing it. “It was in the wrong key [for me], but it ended up being this huge Californian thing,” Rea said after the single climbed into the Billboard Hot 100, where it peaked at No.12 and earned Rea a Grammy nomination. Believing Fool (If You Think It’s Over) was hardly representative of his work, Rea felt its success was the equivalent of someone playing an April Fool’s Day prank on him. It was, however, very real – and became the gift that kept on giving, providing Rea with a substantial royalty cheque at a time when he was worried about losing his house.

7: Frankie Lymon And The Teenagers: Why Do Fools Fall In Love

There’s no doubt Frankie Lymon And The Teenagers’ signature hit, Why Do Fools Fall In Love, remains a fantastic song, but its success came at a price for their precocious frontman. Topping the US R&B chart and the UK singles chart in the summer of 1956, the classic doo-wop-flavoured hit established the New York-based Lymon (then still only 15) as a household name; but while his rise was stratospheric, his fall was equally swift – and particularly brutal. Lymon went solo in 1957, but his career rapidly fell into decline and he died, aged 25, of a heroin overdose in February 1968. His colourful life was later dramatised in Gregory Nava’s 1998 film, Why Do Fools Fall In Love, starring Larenz Tate and Halle Berry.

6: The Who: Won’t Get Fooled Again

Pete Townshend had intended to follow The Who’s multi-platinum Tommy album with an even more complex rock opera, Lifehouse, which envisaged the arrival of the internet almost three decades before that became a reality. However, while Townshend was (temporarily) forced to ditch this ambitious project, the new songs he’d been working on provided the meat for The Who’s 1971 masterpiece, Who’s Next. The band trailed the album’s release with the classic single Won’t Get Fooled Again: a timeless entry among the best songs with “fool” in the title, with a well-observed Animal Farm-esque lyric (“Meet the new boss – same as the old boss!”) about how our democratically elected political leaders are prone to abuse the powers society grants them.

Blur fans might initially have thought an April Fool’s Day joke was being played on them when they heard whispers of new music early in 2010. However, their heroes were as good as their word, and the group delivered Fool’s Day, their first new music in seven years, on that year’s Record Store Day, 17 April. It marked the Britpop legends’ first official single since 2003’s Good Song, but – more significantly – it was Blur’s first single to feature guitarist Graham Coxon since 2000’s Music Is My Radar. Fool’s Day didn’t disappoint, either. Throwing in London-centric references to the Westway and Ladbroke Grove, it had the same scratchy, lo-fi charm as the best of the band’s self-titled album from 1999. As DIY magazine wrote, “It still feels fresh – understated, sure, but with a touch of magic few other bands can match.”

4: Tim Buckley: Look At The Fool

Tim Buckley’s astoundingly wide-ranging career invariably finds him lauded for the elegant folk-rock stylings of his Goodbye And Hello album, the jazz excursions that framed Happy Sad, or else the avant-garde leanings of Lorca and the remarkable Starsailor. However, his later “sex-funk” trilogy, Greetings From LA, Sefronia and Look At The Fool, also contained plenty of merit. Arguably the album still most deserving of some belated love, 1974’s Look At The Fool is usually recalled for the crotch-level funk of tracks such as Helpless and Bring It On Up, but it also featured the poignant Who Could Deny You and the beautifully crafted but emotionally scarred title track, which more than earns its place among the best songs with “fool” in the title. In 2017, Record Collector suggested Look At The Fool was “the album in his colossal legacy begging for reappraisal”, and we can only concur.

3: The Doors: Ship Of Fools

One of numerous standouts from The Doors’ fifth album, Morrison Hotel, Ship Of Fools was reputedly inspired by Katherine Anne Porter’s 1962 novel of the same name, which had been given the celluloid treatment in 1965. Certainly both the book and Jim Morrison’s lyrics proffer dystopian images of the human race swiftly heading towards oblivion, with Morrison’s lines (“The human race was dyin’ out/No one left to scream and shout/People walking on the moon/Smog will get you pretty soon”) also referring to the Apollo 11 moon landing during July 1969 and the increasingly polluted state of the environment in The Doors’ hometown of Los Angeles, California.

2: The Beatles: The Fool On The Hill

Though credited to John Lennon and Paul McCartney, Magical Mystery Tour’s wistful ballad, The Fool On The Hill, was very much a Paul McCartney solo run. Broadly, the song’s titular “fool” is meant to be a solitary figure, largely misunderstood by many, but actually possessed with a wisdom beyond most peoples’ years. McCartney elaborated further on the song’s composition in Barry Miles’ Paul McCartney: Many Years From Now, when he said, “Fool On The Hill was mine and I think I was writing about someone like Maharishi [Mahesh Yogi]. His detractors called him a fool on the hill, a guru in a cave. I was sitting at the piano at my father’s house in Liverpool hitting a D 6th chord and I made up Fool On The Hill.”

We needed a song of real class to top this list of the best songs with “fool” in the title, and Aretha Franklin’s Grammy-winning classic, Chain Of Fools, from her iconic Lady Soul album, fits the bill perfectly. Having heard The Queen Of Soul’s transcendent performance, it’s hard to imagine anyone else doing it justice, yet songwriter Don Covay originally submitted Chain Of Fools to Atlantic Records’ Jerry Wexler in response to a request for songs for Otis Redding. After Wexler heard Covay’s demo, however, he chose it for Aretha Franklin and, as they say, the rest is history. Aretha’s jaw-dropping 1967 recording topped the US R&B chart, peaked at No.2 on the Billboard Hot 100 and later won a Grammy Hall Of Fame Award.

The Queen Of Soul ain’t no fool. Check out our best Aretha Franklin songs to find out where Chain Of Fools ranks.