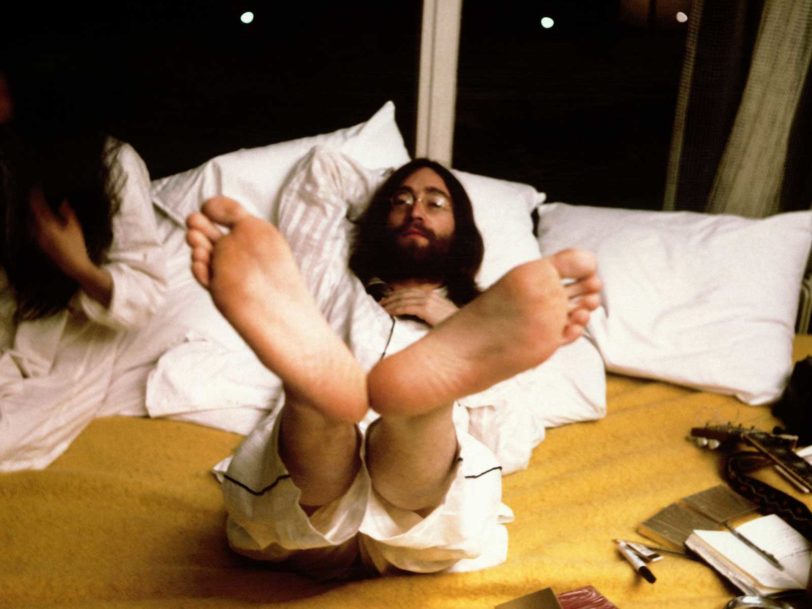 Whether treated with reverence or given radical makeovers, the best John Lennon covers prove the ex-Beatle’s songs were built to endure.

From penning pop hits for The Beatles to deploying political anthems as a solo artist, John Lennon was never less than a searingly honest songwriter. Brutally murdered by Mark David Chapman on 8 December 1980, he left behind a legacy that few can match. The best John Lennon covers have seen artists ranging from rock chameleon David Bowie to soul legend Otis Redding reimagine his work in their own inimitable styles, proving that Lennon’s songs have what it takes to endure through the ages.

Here, then, are our 20 best John Lennon covers.

Doyen of the 70s Laurel Canyon scene, Jackson Browne plays it straight with this gentle, largely acoustic take on Lennon’s tribute to Yoko Ono. Originally penned during sessions for The Beatles’ “White Album”, the song eventually appeared on Lennon’s Imagine – a touching respite from the more acerbic songs that surrounded it.

With a lyric seemingly tailor-made for these twisted times, God saw Lennon in classic take-down mode, questioning everything from organised religion to political leaders and pop-cultural icons – The Beatles included. Wilco frontman Jeff Tweedy’s faithful version seemed apt a month ahead of a US election in which cynicism reigned supreme.

Such was Lennon and Yoko Ono’s commitment to spreading their peaceful message throughout the world, even their 1971 Christmas hit had a political agenda. Canadian singer Sarah McLachlan retained the children’s choir on her version while leaning even further into the song’s seasonal vibe, revelling in the key changes and making sure her arrangement was as packed as heavy snowfall.

The fact that six of the best John Lennon covers were recorded for the 2007 tribute album Instant Karma: The Amnesty International To Save Darfur is testament not only to the durability of Lennon’s songs, but to the importance of the cause the album set out to support. With a video intercut with harrowing descriptions of the atrocities carried out during the War In Darfur, Green Day’s suitably aggressive take on Working Class Hero offers a furious middle finger to authoritarian regimes.

Recorded at the height of the COVID-19 pandemic, and with the Biden versus Trump US election on the horizon, Lennon’s youngest son deftly captured the mix of desperation, angst and fury behind one of the rawest songs on Lennon’s debut solo album, John Lennon/Plastic Ono Band. Keeping it simple – electric guitar, drums and bass – gave the words extra room to work in. As Ono Lennon wrote when sharing the recording: “Crazy how much the lyrics fit our current year.”

How would Lennon’s slogan-friendly protest anthem work in the hands of a band whose glossy promo videos suggested karma never came to get them? Surprisingly well, actually, in one of the more radical reworkings among our list of the best John Lennon covers. Just when you think you’ve got the measure of their version – an atypically moody take on what keyboardist Nick Rhodes described as a “sharp Lennon lyric and hugely uplifting chorus” – they throw the whole synth-pop effects bag at it in an attempt to lift that chorus into the stratosphere.

Christina Aguilera’s appearance on cult TV show Nashville may have surprised some (though not as much as prog-metallers Bigelf teaming up with the dirrty pop star), but her version of Lennon’s painfully open examination of his traumatic childhood makes it clear how well she could wear the country crown if she chose to. Seen through the lens of her own troubled upbringing, Aguilera’s emotive performance makes even more sense.

Played live in Hong Kong on the final date of Bowie’s Serious Moonlight tour, three years to the day after Lennon’s death, Bowie’s emotive, soul-infused take on Lennon’s signature song was a once-night-only performance. “Last time I saw John Lennon was in Hong Kong,” Bowie told the crowd. “We went to Hong Kong market and there was a stall that sold old clothes, and there was a Beatle jacket on the stool… I asked him to put it on so that I could take a photograph. I took a photograph. I’ve still got the photograph; the jacket doesn’t fit properly. It looks like John had outgrown it.”

No such fate for Imagine itself, which has been covered over 200 times since Lennon released it in 1971.

Capturing the tinges of psychedelia in Lennon’s lyrics (“Dream, dream away, magic in the air/Was magic in the air?/… Ah, böwakawa poussé, poussé”), R.E.M. dial back on the original version’s strings while adding phased guitars and a languid Michael Stipe vocal to create an ethereal new framework for a song that, as its title suggests, was quite literally written from a dream.

Originally recorded for their role as Future Villain Band in the 1978 fantasy musical romp Sgt Pepper’s Lonely Hearts Club Band, Aerosmith’s version of Come Together has had far more longevity than the movie it originally appeared in. No surprise, really: Steven Tyler inhabits the song’s slinky groove as if it were a pair of his patented skin-tight leggings while, Joe Perry out-blueses The Beatles’ original with some typically raunchy guitar that secures its status among the best John Lennon covers.

While The Beatles used cutting-edge studio techniques to create their take on psychedelia, a more DIY approach was being worked up in the US by bratty kids without half the resources. The Black Keys tapped into those amphetamine-fuelled proto-punks’ garage rock for their scuzzed-up take on this kaleidoscopic classic from the Revolver album which was originally inspired by an LSD trip with actor Peter Fonda, who, recounting a near-fatal self-inflicted gunshot wound he received as a child, kept telling The Beatles, “I know what it’s like to be dead.”

Lennon’s expression of his timeless love for Yoko Ono doubles as a reflection on the difficulties long-term relationships can face, and the ease with which couples can lose touch with each other. Recorded for the Instant Karma tribute album, The Flaming Lips’ sparse cover reaches into their box of space-age tricks to underline Lennon’s wish to “Take a trip somewhere far, far away”, while the cracks in frontman Wayne Coyne’s voice add to the sense that this relationship has endured its fair share of trials.

Sung in a mix of English and his native language, Wolof, Youssou N’Dour’s take on Jealous Guy is continents, if not worlds, apart from the haunting rendition Roxy Music took to the top of the UK charts in 1981. Rearranged for acoustic guitar and traditional Senegalese percussion, N’Dour’s version earns its place among the best John Lennon covers by adding new layers to a song that has been covered by artists as diverse as alt-metallers Deftones, soul singer Donny Hathaway and the proto-punk “poet laureate of New York” Lou Reed.

“I was fat and depressed and I was crying out for help,” Lennon recalled of the period he wrote Help!, the main theme to The Beatles’ second movie. By the time Tina Turner recorded it, two decades later, she could well relate to the song’s message – she’d overcome a series of struggles, including abuse at the hands of her former husband, Ike Turner, on her way to becoming crowned The Queen Of Rock’n’Roll. Not that she needed help anymore: a cover of Al Green’s Let’s Stay Together had reignited Turner’s solo career in 1983, though her measured take on The Beatles’ arrangement, slowing the song down and replacing the chiming guitars and driving backbeat with piano and a gospel choir, was topped with a typically committed vocal for a highlight on international editions of her juggernaut comeback album, Private Dancer.

Having performed Lennon’s 1970 song during a run of 2002-2003 solo shows, Beck finally released a studio version on, of all things, a Starbucks compilation of love songs. Again a solo rendition of sorts (he performs all the instruments), Beck delivers one of the best John Lennon covers by retaining the original’s simplicity while working up a new arrangement – layered vocals, slide and acoustic guitar, bass, drums and minimalist piano – that’s both sumptuous and understated, honouring the song while also letting it sit alongside his own affecting list of lovelorn ballads.

Roxy Music began performing Jealous Guy on tour in the wake of Lennon’s death and released a studio version as a single the following year, when it became their only UK No.1. Recorded while the group were working their way toward the nostalgic dreamscapes of their final album, Avalon, the synth washes, intertwining reverbed guitar lines and Bryan Ferry’s emotive vocals enhanced the sense of loss the song carried so close to Lennon’s murder.

It takes no less an artist than David Bowie to bag two slots in our run-down of the best John Lennon covers. A longtime admirer of the ex-Beatle, by the time Bowie got him into Electric Lady Studios, in New York, to add acoustic guitar to his version of the Let It Be song, Bowie had already spearheaded glam rock – what Lennon called “rock’n’roll with lipstick on” – and was entering a new phase that took its cue from Philadelphia soul. Carlos Alomar’s shimmering wah-wah guitar helps give Across The Universe a blue-eyed soul makeover, while Bowie delivers a vocal like a true believer in search of transcendence. The cover divided fans who felt it stood out from the rest of the Young Americans album, but time has been kind to it, and Lennon himself got behind the idea: “I thought, Great, because I’d never done a good version of that song myself,” he said. The ultimate upshot of the session, however, was that Bowie and Lennon ended up co-writing Fame together out of a jam on an old doo-wop tune by The Flares, Foot Stompin’.

It’s fitting that Stax legend Otis Redding covered Day Tripper almost as soon as The Beatles’ version hit the streets: Rubber Soul, the 1965 album whose sessions the song came from (it was released as a standalone single in December that year) had been partly inspired by Redding’s brand of Southern soul. When Redding included Day Tripper on his 1966 album Complete & Unbelievable: The Otis Redding Dictionary Of Soul, he was kind of just showing them how this thing was really done. Live performances were another thing all together.

With its shifting sections and stop-start arrangement, Happiness Is A Warm Gun seems tailor-made for The Breeders, the band Kim Deal infused with her own loud-quiet-loud dynamic while on vacation from Pixies. Given that she’d played bass on such songs as Bone Machine, Vamos (Surfer Rosa) and Brick Is Red, Deal had no problem with the varying demands of this stand-out from The Beatles’ “White Album”, deftly working up one of the best John Lennon covers and unleashing it on The Breeders’ debut album, Pod. Twenty-two years after writing the song, Lennon’s non-sequitur lyrics could have been torn right from the alt-rock playbook.

No stranger to incisive lyrics that refuse to pull any punches, Stevie Wonder’s euphoric take on Lennon’s paean to togetherness came at a time when the young Motown genius was on the road to recording his own pleas for social unity. Not just one of the best John Lennon covers, this is one of the best covers of any song, anywhere, in the history of music.