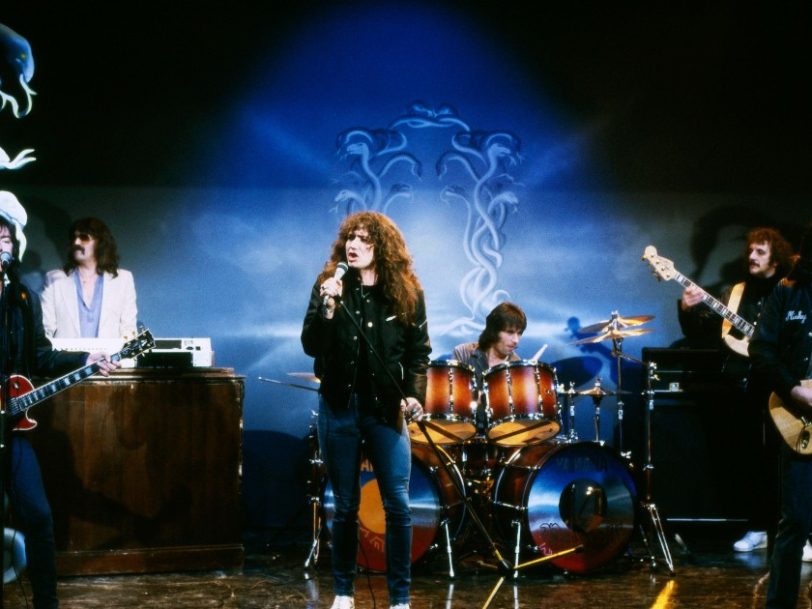 ‘Ready An’ Willing’: How Whitesnake Coiled Themselves Around Rock

It may have been their third album, but there was nothing “difficult” about Whitesnake’s Ready An’ Willing. Initially released in the spring of 1980, the record provided David Coverdale’s group with their mainstream breakthrough, cracking the Top 10 and going gold in the UK with a little help from their first bona fide UK hit, Fool For Your Loving.

Listen to ‘Ready An’ Willing’ here.

In broader terms, Ready An’ Willing was also a landmark record in that it marked the debut of what many still consider to be Whitesnake’s “classic” line-up, with Coverdale and keyboard maestro Jon Lord drafting in their former Deep Purple bandmate Ian Paice after the release of Whitesnake’s second album, 1979’s Lovehunter. As lead guitarist Bernie Marsden later revealed, Paice’s presence behind the drum kit allowed everything else fall into place.

“Personalities within the band were gelling nicely”

“I just remember Ian Paice coming into the band and the difference that he made,” Marsden told Ultimate Classic Rock in 2015. “That’s not being detrimental to the original drummer [Dave Dowle], who was great, but when you’ve got the ‘The Guv’nor’ wanting to join your band, you know, what are you going to do?”

Having both played with Paice in Deep Purple, Coverdale and Marsden looked at each other during that first session with the drummer “and we didn’t have to say anything – we just realized and knew”, Marsden continued. “We could write a certain way knowing what Ian Paice and Jon Lord would put into that material and, they never let us down.”

With Paice, guitarist Mickey Moody and bassist Neil Murray now in the band’s engine room, Whitesnake had all the power and dexterity they needed to record Ready An’ Willing. To their credit, however, the new line-up spent their first few months together on the road, literally getting their act together while they fine-tuned their new material through non-stop gigging.

“All of us were performing at our absolute best”

“We’d toured for about six months before we started to record Ready An’ Willing and that really showed,” Marsden recalled. “I think we’d hit kind of a gold vein song-wise as well.”

With their new material clicking into place, Whitesnake could press home their advantage, calling on one of hard rock’s best producers to man the console during the Ready An’ Willing sessions at Ridge Farm in rural Surrey.

“We had Martin Birch in the studio, the secret weapon as I used to call him,” Marsden said of the producer who’d made his name on records by Fleetwood Mac, Deep Purple and Rainbow. “He was dead on the money… He’d say, ‘I’m ready for a solo,’ and I’d do a solo and I’d say, ‘OK, shall we do it again?’ and he’d say, ‘Thank you, I’ve got it,’ and he was right usually. You learn to trust people like that.”

As Marsden also noted, the band’s decision to concentrate on “trying to come up with the best songs” rather than being flashy stood them in good stead. Accordingly, Ready An’ Willing was stuffed to the gills with no-nonsense hard rock, but while lean yet tough radio-friendly anthems such as Sweet Talker and the album’s strutting title track were the order of the day, Whitesnake’s intuitive playing and desire to cut out extraneous fat meant that even the slow, lascivious Love Man and the acoustic, Led Zeppelin III-esque Ain’t Gonna Cry No More sounded like they could have been singles.

Ultimately, though, a potentially gilt-edged Bernie Marsden tune had already earmarked itself as Ready An’ Willing’s signature song. However, it required some additional input to get it over the line.

“David came back with the whole lyric thing, which was great”

“I basically had Fool For Your Loving together, pretty much the riff and the verse that you know,” Marsden told Ultimate Classic Rock. “And then I think Micky Moody came up with a small bridge piece that tied the whole thing together brilliantly and then David [Coverdale] went away and came back with the whole lyric thing, which was great. I think I had the ‘fool for your loving’ line and then David built around that afterwards.”

Coverdale’s ability to finish a lyric to perfection would characterise many of the best Whitesnake songs, as Marsden attested: “He’d disappear and we’d either see him two hours later or two days later with a finished lyric, which was really cool.”

Catchy, confident and loaded with swagger, Fool For Your Loving was released in mid-April and duly climbed to No.13 in the UK, rewarding Whitesnake with their first sizeable hit single. The song also went Top 30 in several European territories and raised the band’s profile considerably in North America. Riding the crest of this wave, Ready An’ Willing followed through on 31 May, rising to No.6 in the UK and becoming the first of the band’s albums to make headway on the Billboard 200. Indeed, by the time they toured the record in Europe, Whitesnake were very much in contention with rock’s heaviest hitters.

“We were probably more inspired than we’d ever been”

“Things really started to happen… Bigger venues, thank you very much… and personalities within the band gelling nicely,” David Coverdale recalled in a 2016 interview on Whitesnake’s official website.

“Other than Jon and Ian’s legendary musical glories with Deep Purple I’d say that all of us were performing at our absolute best… and probably more inspired than we’d ever been before,” the singer continued. “Getting better at our game… No doubt about it… inspiring the best out of each other… and having a grand ol’ laugh at the same time…”