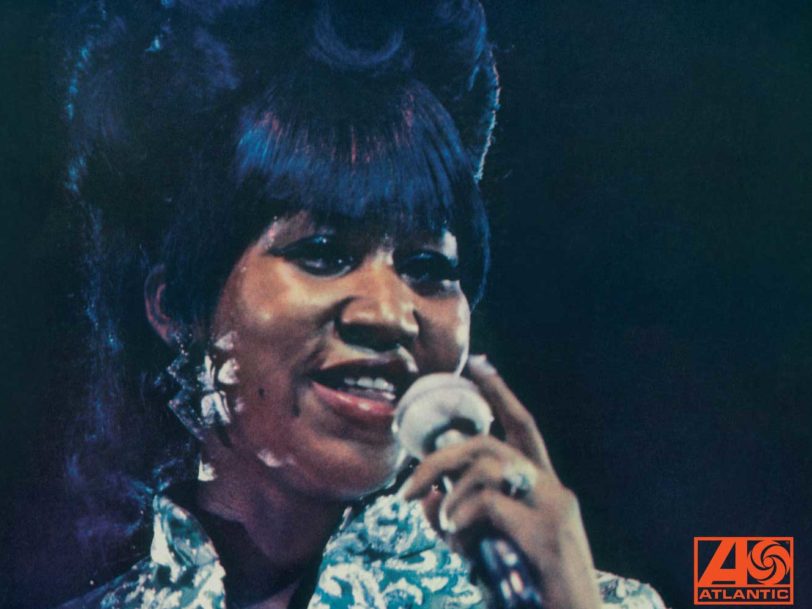 ‘Lady Soul’: Proof That Aretha Franklin Deserves Every Title She Gets

With her ‘Lady Soul’ album, Aretha Franklin made further steps towards grabbing the crown as The Queen Of Soul.

Gone is the last name. It’s a statement. Aretha: Lady Soul. The album cover: a strip of blue with red typography and a photo of the woman herself, jewelled and coiffed – so much so that they don’t even get all her hair in the photo; microphone in hand with such natural ease it may as well be just another finger.

Kicking off the record, whose sleeve promises so much, is Chain Of Fools. That guitar line is stark, rubbery and exciting. It’s intriguing that Aretha Franklin is not the first thing you hear on her own album. You wait tentatively for her voice, and when it arrives it does so with a sound that travels up from the gut with ferocity and intent. Here is Lady Soul.

Soaring vocals, a chorus of voices

Chain Of Fools’ pounding bass drum, the gentle puffed vocals of backing singers The Sweet Inspirations (Cissy Houston, Sylvia Shemwell, Myrna Smith and Estelle Brown) and younger sister Carolyn propel Aretha’s soaring vocal on and on. The lyrics make a nod to Aretha’s gospel roots, the repeated “chain” recalling slavery and the malicious treatment of the African diaspora at the hands of white America. It’s a plea, exhausted and frustrated, but with the promise of hope that feels tantalisingly within reach when sung in a church; lyrics lifted on a chorus of voices.

But here the chain refers to the shackles of a bad relationship; of a cheating beau and of the fury of being made a fool of. “For five long years/I thought you were my man/But I found out/I’m just a link in your chain,” Franklin sings with the indignant cry of a poorly treated woman who can’t bring herself to leave just yet. “One of these mornings/The chain’s gonna break/But up until then/I’m going to take all I can take.” She’s locked in for now but, with a delivery as powerful as that, you know it won’t be for much longer.

Following on from such an explosive start, Money Won’t Change You sees Aretha take the James Brown number that he recorded for James Brown Sings Raw Soul in 1967 and shaves off some of that rawness in favour of giving the song a soulful sheen. There’s still the funky bombast and horns, but Aretha’s fulsome singing, paired with the sharp sass of The Sweet Inspirations’ backing vocals, gives it a gloss and femininity that’s missing from Brown’s original.

She wears the songs

In fact, the Lady Soul album as a whole – released on 22 January 1968 – sees Aretha adapting a variety of songs and making them truly her own. Like Don Covay’s Chain Of Fools, gospel makes an appearance in the form of People Get Ready, penned by Curtis Mayfield and performed by his group, The Impressions, in 1965. It is a beautiful and powerful civil-rights anthem that, in the hands of The Impressions, is a delicate and soulful number with gentle electric guitar, slight and twinkling percussion and vocal harmonies that nod to their earlier days as a doo-wop group. It’s shimmering and uplifting.

On Lady Soul, however, the song opens with a heavenly chorus of “I believe”, and horns, before Aretha sends it rolling mellifluously, motioning it forward like the train she sings of. The cries thanking the Lord that see out the song send you to church, to the origins of Aretha’s career and her life as a reverend’s daughter. Aretha had already shown that civil-rights songs were something she could inject with deep feeling on her cover of – perhaps the other biggest anthem of its time – Sam Cooke’s A Change Is Gonna Come, which she recorded for her 1967 album I Never Loved A Man The Way I Love You; while A Change Is Gonna Come, with its largely simple piano and organ sound, is still divine in her hands, on Lady Soul, everything Aretha sings feels more confident. The songs don’t wear her, she wears them.

Testament to Mayfield’s songwriting skills, People Get Ready has been perfectly adapted and performed by a range of artists, including The Staple Singers, Al Green and Bob Marley And The Wailers. But for Aretha, this song would mark an important moment, as she would return to Mayfield’s music again in 1976, performing the songs for the soundtrack Sparkle, which were written, arranged and produced by Mayfield.

In 1968, however, Aretha had a fistful of brilliant songs and knew how to get the best out of them. The choice of covers like Jim Ford’s Niki Hoeky and The Young Rascals’ Groovin’ are somewhat intriguing. Niki Hoeky still seems most naturally performed by Bobbie Gentry on her 1967 album, Ode To Billie Joe, but Aretha takes it and, with a fantastically cool new arrangement, it’s a dancer. While you’d think a song with such apparent musicianship would have been recorded in Muscle Shoals, it was recorded in New York (though Muscle Shoals’ legendary house band, The Swampers, were on the record – in a capacity – with Jimmy Johnson and Roger Hawkins, the group’s guitarist and drummer, respectively, performing).

The Swampers appeared on a variety of Aretha’s biggest hits, including Respect and Think, as well as I Never Loved A Man (The Way I Love You), though that was the only song from the album of the same name that had been successfully recorded when Aretha went to Muscle Shoals. Her husband and manager, Ted White, had caused a run of arguments and fights, and The Swampers eventually had to leave, with little work done. Luckily, Atlantic Records’ Jerry Wexler had the foresight to invite them to New York for further sessions, as their contributions to Aretha’s work are invaluable.

Groovin’ is a sleepy affair, as a song about a Sunday should be. The Sweet Inspirations rework the famous first line of The Mamas And The Papas’ Monday, Monday, here singing “Sunday, Sunday” sweetly as Aretha sighs the song to life atop bass, vibraphone and organ. A more likely cover choice is Ray Charles’ Come Back Baby, which is sped up to become a thrilling soul song with call-and-repeat backing vocals and a flurry of horns that whizzes by in a frantic two and a half minutes.

Perhaps the most successful cover on Lady Soul is Aretha’s take on You Make Me Feel (Like A Natural Woman), penned by Carole King and Gerry Goffin – the incredible wife-and-husband songwriting team behind a run of hits for solo artists and groups throughout the 60s. Carole King would record the song herself on her bestselling 197 album, Tapestry, and Aretha would sing it for King when she was given a Kennedy Center Honor in 2015.

From Lady Soul to The Queen Of Soul

Lady Soul closes with Ain’t No Way – one of Aretha Franklin’s most beautiful songs, penned by someone who does not get the credit they deserve: her younger sister, Carolyn Franklin. Carolyn would write a number of brilliant songs for her sister across her career, including Baby, Baby, Baby, Save Me, Ain’t Nobody (Gonna Turn Me Around), Pullin’ and Angel. She was also a phenomenal talent in her own right, recording and issuing a handful of fantastic albums, including 1969’s Baby Dynamite!

This deeply romantic, heartfelt number comes on almost like a slow ballad with jazzy piano and languid saxophone. Cissy Houston provides the utterly magical soprano throughout – her voice as clear and pure as a bell, and a reminder that she deserved to be a much bigger star in her own right. She did, however, pass down that incredible voice to her daughter, Whitney.

For her part, Aretha sings from the bottom of her shoes: these are words that twist and roll their way out into the air and onto record. Cissy’s perfect high note might ring out like an easy soar to freedom, but Aretha’s rumble, deep and tired and imploring – “And if you need me like you say you do/Then baby don’t you know that I need you” – remains the song’s defining moment. The slowest, sultriest thing on Lady Soul, Ain’t No Way is easily one of the most beautiful songs in a catalogue full of incredible gems, and a perfect finisher to a brilliant album.

She may be “Lady Soul” here, but soon Aretha would be “The Queen Of Soul”. It is easy to see why.