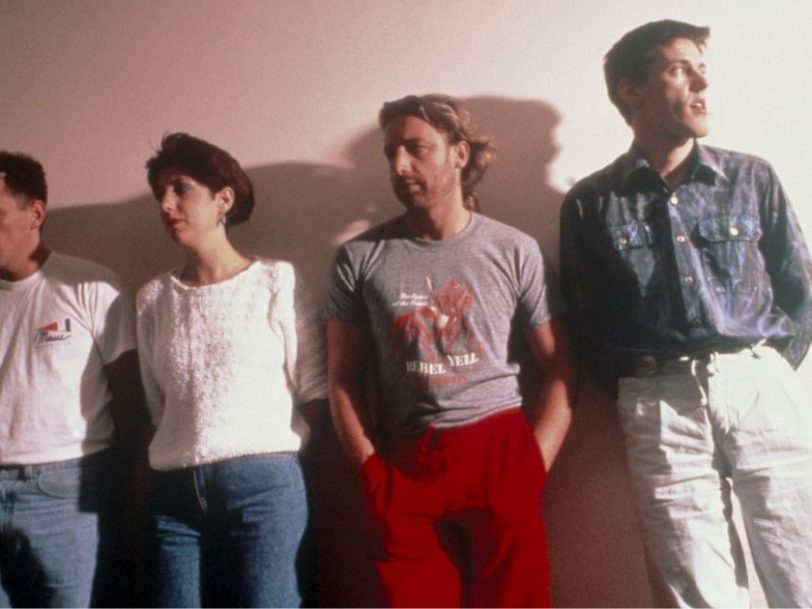 The product of a uniquely hybridised sound, the best New Order albums have gifted the Manchester quartet an enviable body of work.

While vocalist Ian Curtis was still alive, Joy Division looked set to become one of the biggest – and most influential – rock bands of them all. However, after Curtis’ tragic suicide, in May 1980, the future looked considerably less certain for Bernard Sumner, Peter Hook and Stephen Morris. By their own admission, sheer bloody-mindedness drove them to stick to their guns, and that decision has paid glorious dividends. Recruiting Gillian Gilbert, they regrouped as New Order and found their own unique sound through fusing angular guitar rock with synth-driven pop and the cutting-edge sounds of the dancefloor. In a countdown of all their studio records, we evaluate the best New Order albums, revealing why they remain so vital.

Listen to the best of New Order here, and check out our run-down of the best New Order albums, below.

Though it was a huge success, the tour promoting New Order’s fifth album, Technique, almost killed them off through a combination of exhaustion and internal tensions. The group didn’t officially split up, but drifted into a lengthy hiatus while they concentrated on solo projects. However, financial concerns at Factory Records led the label’s most successful group to reconvene and make a new album across 1991 and 1992.

Helmed by producer Stephen Hague, the Republic sessions were fraught, with Peter Hook observing in his memoir Substance: Inside New Order, “If we’d drifted further apart we would have been in different post codes.” Getting Republic over the line didn’t prevent Factory from going bankrupt, but it did yield some spellbinding music, with the singles Ruined In A Day, World (The Price Of Love) and the bittersweet Regret ranking among the best New Order songs of the 90s.

Recorded during the extremely fecund phase which produced New Order’s eighth studio album, 2005’s Waiting For The Sirens’ Call, the eight songs that eventually made up the Lost Sirens tracklist were initially intended to form the backbone of a different project. However, that was shelved after Peter Hook left the group, in 2007, and the songs only received an official release six years later.

Bearing the circumstances in mind, the title, Lost Sirens, is understandable, but it has led people to think of the album as a collection of outtakes rather than a fully-fledged record in its own right. However, songs such as I’ll Stay With You, the hypnotic I Told You So and the brilliant, John Barry-esque Recoil strongly suggest Lost Sirens demands inclusion among the best New Order albums on its own merits.

Guitarist/keyboardist Phil Cunningham originally joined New Order in 2001, deputising for Gillian Gilbert, who had to take a sabbatical from the group while caring for her young family. Formerly a mainstay of Manchester indie outfit Marion, Cunningham was a guitarist first and foremost, so it made sense that New Order’s next album would continue in the guitar-driven vein of its predecessor, Get Ready.

Overseen by several producers, including Stephen Street (The Smiths, Morrissey, Blur and John Leckie, Waiting For The Sirens’ Call emerged after protracted sessions at Peter Gabriel’s Real World Studio, but the graft was worth it – the record’s three singles, Krafty, Waiting For The Sirens’ Call and Jetstream (the latter featuring a slinky star turn from guest singer Ana Matronic) were class acts, and its best deep cuts, Guilt Is A Useless Emotion and the pensive Who’s Joe?, are firmly established fan favourites which still feature in New Order’s live set.

Must hear: Waiting For The Sirens’ Call

After the difficult birthing of Republic, New Order’s future seemed uncertain. After some skilful mediation from manager Rob Gretton, however, the band reunited to play a number of triumphant high-profile gigs in 1998, including the Reading Festival and London’s Alexandra Palace. With harmony re-established, New Order turned their attention to a new album – their last with Gillian Gilbert before her temporary leave of absence.

Partly due to Bernard Sumner rekindling his love of the guitar, the ensuing Get Ready was the group’s hardest rocking set in years. Lead single Crystal was a belter; 60 Miles An Hour and Turn My Way were propelled by vintage Peter Hook basslines; and Rock The Shack (featuring Primal Scream’s Bobby Gillespie) fizzed with Stooges-esque energy. However, as the moody Vicious Streak and heart-meltingly lovely Run Wild proved, Sumner and co hadn’t entirely binned the synths, either.

Must hear: Turn My Way

Assembled from sessions in London’s Jam and Dublin’s Windmill Lane studios, New Order’s fourth album, Brotherhood, was sequenced so that the first half included all their new, guitar-driven tracks, while the second featured a quartet of synth-pop songs. This decision polarised opinion within the band, with Stephen Morris later telling Noisey that he felt presenting the album this way “didn’t quite work”. Nonetheless, Brotherhood helped the group crack the US, and it contains plenty to embrace today. After all, a platter which includes tracks of the calibre of Broken Promises, As It Is And When It Was and the sublime Bizarre Love Triangle simply forces its way up the ranks of the best New Order albums.

Many New Order fans felt the band must have finished when Peter Hook departed in 2007. However, Bernard Sumner, Stephen Morris, Gillian Gilbert and Phil Cunningham had other ideas, and they made a confident return to the fray with Music Complete, recorded with new bassist Tom Chapman.

The record’s opening cut, the anthemic, guitar-driven Restless, suggested the group were picking up where Waiting For The Sirens’ Call left off, but most of Music Complete embraced their electronic side. Smart, dancefloor-friendly pop (Tutti Frutti, People On The High Line) largely dominated proceedings, though there was room for Iggy Pop to growl his way through Stray Dog, and another special guest star, The Killers’ Brandon Flowers, to further elevate the album’s suave closing track, Superheated.

Must hear: People On The High Line

New Order had a heavy load to bear when they recorded their debut album, Movement. As former members of Joy Division, they were expected to deliver groundbreaking songs, but they were still mourning the loss of Ian Curtis, and their producer, Martin Hannett, believed they couldn’t hack it without their late singer.

Taking all that on board, New Order themselves have often been Movement’s biggest critics, yet this shouldn’t obscure the fact that it was actually a solid first effort. Bernard Sumner was still feeling his way as a vocalist, but there are plenty of positives to take from the music: the band were already incorporating their soon-to-be trademark electronica on the songs Truth and Senses, while the atmospheric, guitar-based likes of ICB, Dreams Never End and the hypnotic Chosen Time still inhabited a beguiling space of their own. With hindsight, they conspire to lift Movement into the Top 5 of the best New Order albums.

With the possible exception of The Smiths, New Order were the biggest indie outfit in the UK during the mid-80s, but they were also turning heads in the US. Future The Silence Of The Lambs director, Jonathan Demme, shot the glossy promo for The Perfect Kiss, while that song’s parent album, Low-life, became New Order’s first major stateside release.

A nigh-on perfect synthesis of electronic pop blended with angular guitar rock, Low-life was stuffed with brilliant tracks, ranging from the infectious Love Vigilantes to the searing, bass-driven Sunrise and the moody, Ennio Morricone-esque Elegia, and it captured the group hitting an almighty creative peak. The album only just snuck into the Top 100 of the Billboard 200, but it opened a lot of doors and, over the next five years, New Order’s US gigs and record sales would get bigger and bigger.

By the late 80s, New Order were no strangers to critical acclaim, but their music truly chimed with the zeitgeist when they scored their first UK No.1 album, Technique. In retrospect, it didn’t hurt that, on the cusp of the 90s, Manchester was at the epicenture of the UK’s hottest music, nor that the city’s newest superstars, The Stone Roses and Happy Mondays, were citing New Order as an influence, but Technique was still brilliantly executed on its own terms. It was partly recorded in Ibiza, and its first single, Fine Time, absorbed the island’s club culture, but to describe Technique as New Order’s “acid house” album is to sell it significantly short. It’s long on both stylish, layered electro-pop (Round & Round, Vanishing Point, Mr Disco) and fantastic, guitar-based anthems (All The Way, Love Less, Run), and, decades after the “Madchester” dust has settled, it still sounds utterly sublime.

Must hear: All The Way

Clincing the top spot in our run-down of the best New Order albums, Power, Corruption & Lies isn’t the most commercially successful of the group’s records, but it’s arguably the most pivotal. Prior to its release, the band had begun to incorporate synths and sequencers into their sound on the landmark singles Temptation and Blue Monday, but on Power, Corruption & Lies they seamlessly integrated drum machines and a recently acquired Emulator sampler into their post-punk guitar rock and came up with music that beguiled across a full-length work. Rock tracks such as Age Of Consent and the edgy Leave Me Alone showed they could still entice without their new kit, but The Village, the nervy Ultraviolence and the sumptuous, Kraftwerk-ian Your Silent Face were the product of a uniquely hybridised sound which still beguiles today.

Must hear: Your Silent Face