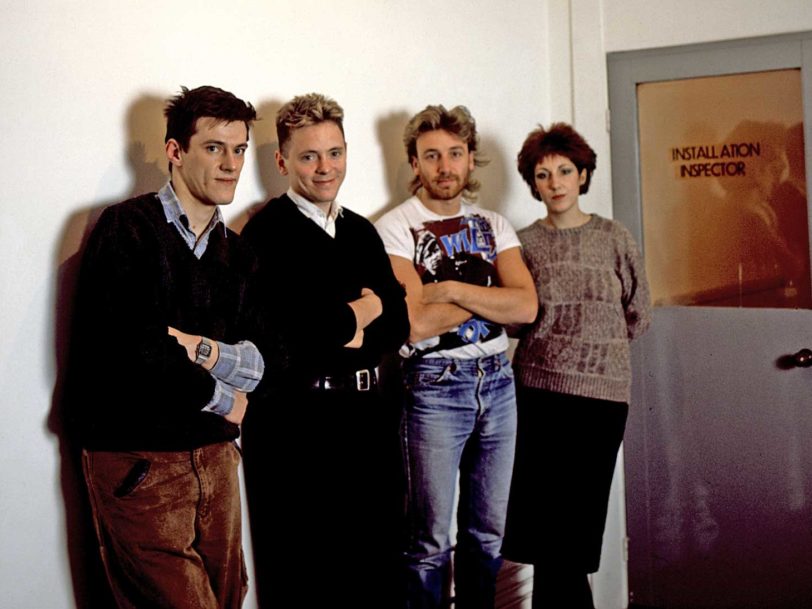 Brotherhood: How New Order’s Fourth Album Cracked The US

New Order were always renowned for their maverick approach to the music business but, by the mid-80s, they’d become so popular they had to engage with the industry to some extent. Their terrific third album, Low-life, had been a bona fide UK hit and raised the band’s profile in the US, where their new label were hoping they’d release their next album, Brotherhood, sooner rather than later. “Warners were keen for a speedy follow-up,” drummer Stephen Morris wrote in his 2020 memoir, Fast Forward, “and we were writing, rehearsing and recording at a rate which today seems impossible.”

“The rock/electronic split started to surface”

Nonetheless, New Order responded positively to the demands. In the early spring of 1986, the band spent time at London’s Jam studios (in his own book Substance, bassist Peter Hook recalled “the sessions went well… we had a huge flat near Hyde Park”) and then took a trip across the Irish Sea for further recording at U2’s favourite complex, Windmill Lane. No one was in any doubt over the quality of the new material, but some tension as to how it should be best executed was building.

“It was here that the rock/electronic split started to surface,” Hook recalled. “Ever the punk at heart, I loved the guitar-based material and loved it when we played together. But the others preferred the more sequencer-led tracks. In the end, the divide was so pronounced that we ended up having the guitar-based tracks on side one and the more electronic songs on side two.”

“Barney worked harder than I had ever seen”

With hindsight, though, Brotherhood still sounds like Low-life’s logical successor, regardless of how it was sequenced. The likes of Weirdo, the urgent, Movement-esque Broken Promise and the gloriously melancholic As It Is When It Was (“A vision of Manchester at its bleakest,” according to Hook) all still rank among New Order’s most satisfying, guitar-based songs, while the electronic tracks again afforded the group an opportunity to broaden their sonic palette. All Day Long married a dark, abuse-related lyric to a dramatic musical backdrop featuring orchestral samples and one of Hook’s most expansive basslines, while Angel Dust saw the band sample Eastern calls to prayer in order to create something otherworldly of their own.

“We also worked hard in Jam to get the lead guitar lines to sound as Ennio Morricone as possible – and even threaded washers on the guitar strings to give us a more metallic sound, like we did on [Low-life’s] Sunrise,” Hook recalled of the more experimental aspects of the sessions. Sumner then decamped to Liverpool’s Amazon studios to mix the tracks that made up the album’s second side. “Barney later worked on the mix… harder than I had ever seen him work before. He wanted the production to be just right,” Hook wrote.

Brotherhood’s second side also featured the sublime happy-sad pop of Bizarre Love Triangle. Rising from cult-level favourite to become firmly established as one of the best New Order songs of all time, the single reached the Top 5 on Billboard’s US Hot Dance Music/Club Play Singles chart and also went Top 5 in Australia, yet, strangely, it stalled outside the UK Top 50 the first time around.

“Bizarre Love Triangle became New Order’s greatest miss,” Stephen Morris reflected in Fast Forward. “An absolutely perfect pop record if ever there was one. It had a brilliant video, again by [New York City-based Factory Records alumnus Michael Shamberg, and always sounded fantastic live. I’m particularly proud of my Emulator playing on that one. Today it’s up there with everyone’s favourites, but in 1986 it was a damp squib. A thing that baffles me to this day.”

Brotherhood itself, however, was anything but a damp squib. Housed in a minimalist Peter Saville-designed sleeve depicting a sheet of titanium-zinc alloy, it was released on 29 September 1986 and went on to top the UK indie chart and crash into the Top 10 of the mainstream chart. Significantly, the album also curried favour with some of the most respected US critics of the day, with The Los Angeles Times’ Steve Hochman declaring that New Order “now make atmospheric grooves with more finesse than any contemporary computer-rocker” and The Village Voice’s Robert Christgau revelling in what he referred to as “the pure, physically exalting sensation of the music”.

Indeed, while Low-life and the Balearic-flavoured Technique have since copped the lion’s share of the plaudits, Brotherhood’s mainstream appeal played an especially significant role in New Order’s burgeoning popularity in the US.

As Warners had hoped, the record arrived in the slipstream of the highly popular Pretty In Pink soundtrack (which featured the freshly penned New Order song Shellshock), and it also presaged the band’s most extensive US tour – a coast-to-coast trek leading up to Christmas 1986 which saw the group performing in major venues such California’s Irvine Meadows and New York’s Felt Forum for the first time. From hereon in, the sky really was the limit.

“‘Brotherhood’ set that up for us”

“The idea was to capitalise on our growing US popularity, which we did,” Peter Hook reflected in Substance. “We wanted to behave like a regular band by doing a regular long tour, and indeed it turned out to be the zenith of our touring career.

“Brotherhood set that up for us,” Hook added. “Despite the divide between the acoustic and electronic songs, I’m still fond of it. When I listen to it now, I’m positive that [the rock songs] on side one have weathered the years better, yet the songs on side two are now my favourites!”