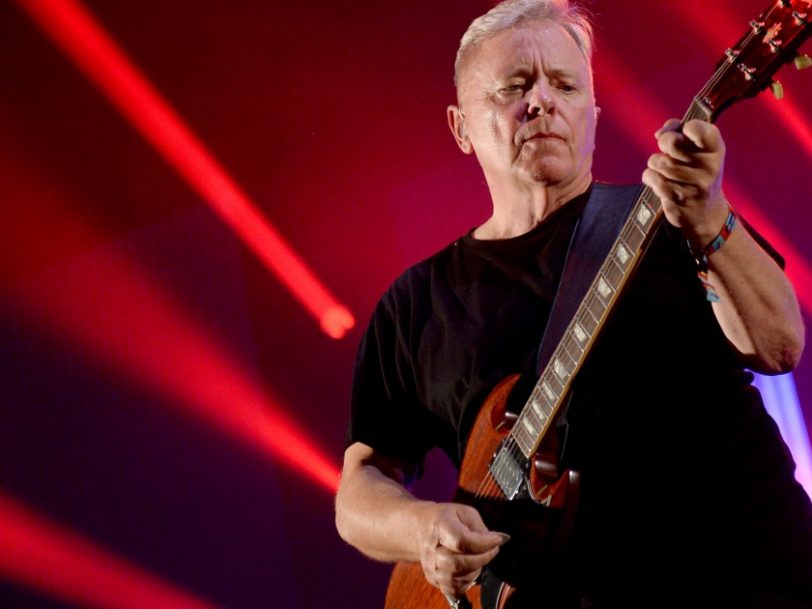 ‘Lost Sirens’: Why New Order’s “Outtakes” Album Stands On Its Own

Dusted down after years ‘in a cupboard’, New Order’s ‘Lost Sirens’ album includes some of the group’s best music.

Lost Sirens occupies a unique niche in New Order’s wider body of work. Featuring eight tracks clocking in at just under 40 minutes, it certainly constitutes a full-blown album, though the way its contents have been perceived, and even its title, have let it to be thought of as a collection of offcuts, rather than a standalone album in its own right.

“It saddens me a little that Lost Sirens is thought of as an album of outtakes from Waiting The Sirens’ Call, because it realty isn’t,” Bernard Sumner wrote in his memoir, Chapter And Verse. “It’s actually a second, unfinished album.”

“Lost Sirens? Well, it’s not really lost,” Stephen Morris contended in a statement issued in December 2012, a month ahead of the album’s release. “I remember that Martin Hannett once had the idea of making a record and burying it in his garden, so that one day someone would dig it up, like a time capsule,” the drummer continued, referencing one of the many outlandish ideas that the late Joy Division producer had. “We just stuck our record in a cupboard. And now we’ve got it out.”

As Sumner suggested, Lost Sirens is often perceived as an album of “outtakes” dating from the sessions for New Order’s eighth studio album, Waiting For The Sirens’ Call. Though that’s broadly accurate, in that its eight tracks were captured during the 2003 to 2004 sessions which also produced Waiting For The Sirens’ Call, the band were always planning to keep these songs in reserve for their next official studio album. At least that was the plan until bassist and founder member Peter Hook left New Order, in 2007.

After Hook’s departure, the tracks were shelved, and the project was put on ice while New Order went on hiatus. When the group re-formed in 2011, unveiling a new line-up with Tom Chapman replacing Hook on bass and Gillian Gilbert returning on keyboards, the band revisited the material held over from the Waiting For The Sirens’ Call sessions, with a view to giving it an official release.

“We were going through a particularly prolific period”

“When we did the first one we had 20 ideas for songs – we were going through a particularly prolific period,” Morris further explained in late 2012. “But we couldn’t make a double concept album out of them all, so we thought we’d just do two instead.

“The intention was always to write four or five more songs and then put it out 18 months after the first one,” he added. “When we unearthed it from the cupboard recently, with the intention of re-editing some of the songs, we all agreed they didn’t actually need it, and it should just be out there, so here it is.”

New Order were right to refrain from further tinkering: Lost Sirens sounds just fine as it is. Its eight tracks derived from sessions helmed by several different producers, including Stephen Street, Tore Johannsson and Electronic/The Charlatans studio alumnus Jim Spencer, yet while Morris later quipped that “there were a lot of cooks and there was a lot of broth”, Lost Sirens lacks neither cohesion nor inspiration. Indeed, it includes a tranche of seriously excellent tracks.

“We still had the drive and passion for writing great songs”

Sonically, the record is largely an extension of the sound New Order favoured on both 2001’s Get Ready and Waiting For The Sirens’ Call. Most of the songs feature a discreet amount of electronic filigree, and Sugarcane is a slinky, dancefloor-friendly number in the same vein as Waiting For The Sirens’ Call’s Jetstream. But, for the most part, Lost Sirens provides a positive boon for fans who feel the best New Order songs find the group in their guitar-driven mode.

Featuring one of Sumner’s most assured vocals, pensive opener I’ll Stay With You sets the tone, with the band also throwing commendably angular shapes on Californian Grass, and Hook making decisive bass lunges on I’ve Got A Feeling and the shape-shifting, Mac Quayle-produced Shake It Up. Elsewhere, the superb Recoil started life with the working title “Scott Walker”, yet in practice its multi-layered melodies exude the richness of John Barry. Also a stand-out, the closing I Told You So skilfully blends Morris’ hypnotic drum tattoo with some strategic samples and a palpable, Velvet Underground-esque air of menace in order to create something significantly greater than the sum of its parts.

Lost Sirens’ initial release, on 11 January 2013, found it snagging some welcome plaudits (The Independent’s review suggested it “actually bests its parent album”), and it landed in the UK Top 40, peaking at No.23. Far from a stop-gap release, the collection remains an eminently satisfying listen on its own terms.

“The things I like about Lost Sirens are that’s it’s very lush-sounding, big and well-produced,” Peter Hook reflected in a 2013 Mojo interview. “Despite everything that’s happened since then, hearing these songs again reminded me that even as late as when we were making Waiting For The Sirens’ Call, we still had the drive and passion for writing great songs in New Order.”