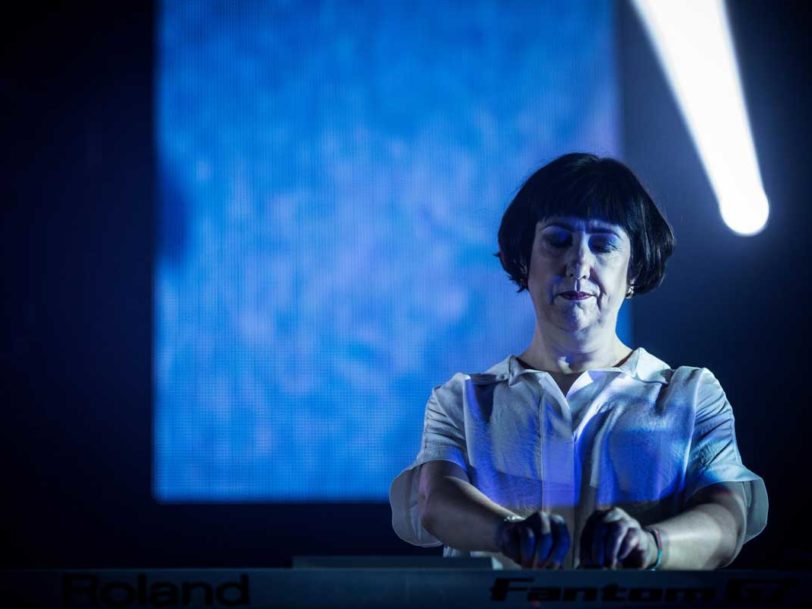 Most epic rock’n’roll stories feature an unsung hero, but in New Order’s case that should surely read “heroine”. After all, while she’s never actively courted the limelight, keyboardist Gillian Gilbert has quietly but decisively played a substantial role in securing New Order’s longevity.

Listen to the best of New Order, here.

Initially enlisted to help Bernard Sumner with guitar and keyboard duties when Joy Division morphed into New Order following the death of Ian Curtis, Gilbert deserves considerably more kudos than she receives for her contributions to their sound. Barring 2005’s Waiting For The Siren’s Call, she’s been heavily involved in all New Order’s albums, and she’s a firm favourite with the fans, whom she continues to inspire.

“Having Gillian as the synth queen was fucking amazing”

In a 2020 NME interview, rising electronic musician Kelly Lee Owens enthusiastically sang Gillian Gilbert’s praises, saying, “Having Gillian as the synth queen was fucking amazing, speaking as a woman in music.” She added, “To have a woman be a part of something like this and own her part was really inspiring… Women are often underrated, or their part is dismissed.”

Gilbert’s response was typically modest: “You never think of your work as part of history or influencing people,” she said. “It was weird when I joined because nobody expected a girl to be brought into the band. They expected another singer.”

“My Dad always said, ‘You changed as soon as you saw Siouxsie And The Banshees on television,’” she told online Australian publication The Music in 2019. “And I really liked Gaye Advert out of The Adverts, who played bass. I thought, Oh there’s nobody playing guitar – you know, no women in bands.”

Prior to New Order, Gillian played with a local punk outfit, The Inadequates, and also appeared with Joy Division on one occasion, playing guitar on one song at a show at Eric’s in Liverpool, in 1979, after Curtis hurt his hand on a bottle.

After Curtis’ death, however, manager Rob Gretton proposed that Gilbert join New Order when the band’s initial spate of low-key gigs in the UK and US revealed they needed a fourth member to enrich their sound – and to encourage Sumner when he took over the lion’s share of vocal duties.

“Rob just rang up one day and went, ‘I’ve got an idea – we should get Gillian in to play guitar,’” Morris recalled in New Order’s podcast series Transmissions.

“He was dead right because we all found singing and playing impossible at the same time when New Order started. Looking back now, it seems obvious that we needed to get someone else in – sort of, ‘Blimey, why didn’t we think of that?’”

Gilbert made her live debut with New Order on 25 October 1980 at The Squat in Manchester. She played guitar during her first studio recording (a re-recorded version of New Order’s first single, Ceremony), but while she also played guitar on a number of early New Order songs, including Dreams Never End and We All Stand, keyboards became her primary domain as the bands’s uniquely hybridised, dance-infused rock sound evolved.

However, while Gilbert was instrumental in helping the band embrace new technology – by effectively “learning how to play precisely by pretending to be a sequencer”, she told BrooklynVegan in 2015 – her input is rarely recognised.

“She brought a new dimension”

“I don’t really think that in all the years the New Order story’s been told that Gillian’s been given the credit for what she did,” The Smiths’ guitarist Johnny Marr said in the Transmissions podcast.

“I try to avoid using the word ‘iconic’ too much, but back in the early 1980s, when they were on the cover of magazines, Gillian was uber-cool. On stage, she brought a new dimension to the band visually, and she played some great parts, too. She’d play these cool little top lines and then she’d put her guitar on and look very mysterious. Gillian added to the allure of the band with her cool, remote femininity.”

Gilbert’s keyboards and sequencers contributed to a series of landmark New Order albums, including the lush Low-Life, the euphoric, Ibiza-flavoured Technique and 1993’s glossy Republic, but after 2001’s aggressive Get Ready, she was forced into a lengthy sabbatical. Initially, this was to care for her and Morris’ daughter Grace when she was diagnosed with a potentially life-threatening spinal disease, but, later, Gillian overcame her own battle with breast cancer. Adding to her trauma, New Order continued during this period, with Phil Cunningham replacing her onstage and in the studio.

“Women should be in bands”

“It is awful when they carry on without you,” Gilbert reflected in a 2016 DJ Mag interview. “When Phil joined, I saw him on keyboards and it was awful, because they recorded at the farm [where we live]. I sort of kept away from the studio and got on with my life. Stephen and I met in the band when I was 17 and we sort of grew up together. I went to see them live once and I just couldn’t stay. I started crying and had to run out.”

Happily, Gilbert returned to the fold when New Order reconvened in 2011. She’s been in the thick of the action since, playing on the band’s widely-acclaimed comeback album, Music Complete, in 2015 and discovering she was sorely missed by New Order’s loyal fanbase while she was away.

“I’m back now and young people are shouting my name, it feels so good,” she says. “The band went too rock’n’roll during Waiting For The Siren’s Call, but I think they got it out of their system. They were sounding like a traditional band and New Order wasn’t like that. But I’ve brought it back around to a balance. Women should be in bands – every band should have one!”