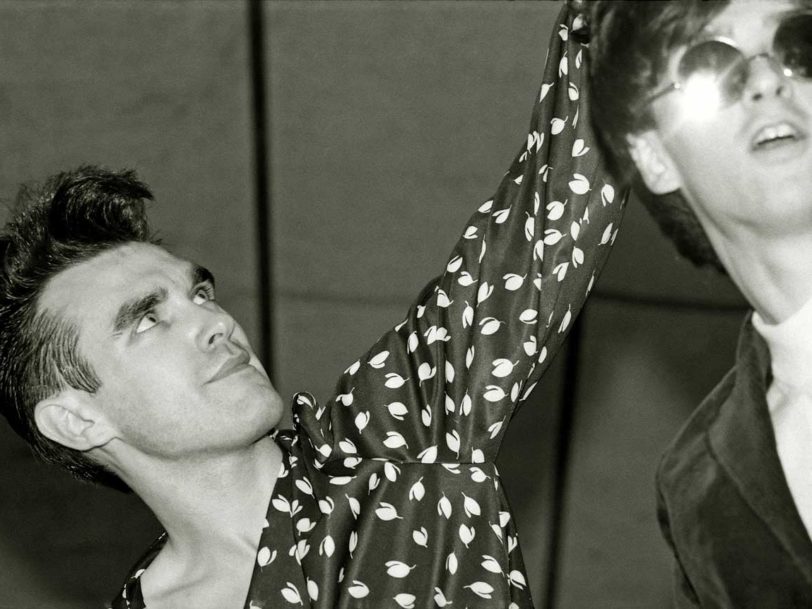 The Smiths’ Legacy: Theirs Is A Light That Never Goes Out

Arguably the most important indie band of them all, The Smiths wrote unique songs with an appeal that refuses to diminish.

As a working band, The Smiths existed from just 1982 to 1987, yet their music continues to exert an influence on successive generations of fans. They were the toast of the British rock press during their five-year lifespan, but they’re just as revered by the critics in the 21st Century, with Q magazine once dubbing them “the one truly vital voice of the 80s”. Their catalogue has effortlessly crossed the generational divide and still appeals to discerning listeners.

Few would argue that this seminal Mancunian quartet bequeathed one of the past century’s most bounteous rock’n’roll legacies, but their body of work remains enviably fresh and potent today. The Smiths worked relentlessly – touring extensively and recording over 70 songs in barely five years, while releasing just four official studio albums: The Smiths, Meat Is Murder, The Queen Is Dead and Strangeways, Here We Come – but was it this dedication to their craft, their attitude or their overall aesthetic which has ensured The Smiths’ longevity?

“We came together to make that music”: forming The Smiths

In reality, it’s a combination of all the above, plus the input of four individuals from disparate musical backgrounds who came together to create something significantly greater than the sum of the parts. “We were put together,” guitarist Johnny Marr later told Designer magazine. “We were a bunch of strangers to all intents and purposes – who then became incredible friends… we came together to make that music.”

To their immediate advantage, The Smiths had a head-start with their rhythm section. Bassist Andy Rourke had previously played with Marr in several short-lived Manchester outfits, including White Dice and Freak Party, and he was blossoming into one of the most gifted bassists of his era.

“I tried to do a tune within a tune,” Rourke told Bass Player in 2006, “I wouldn’t be happy with a bassline unless you could hum it.” He put that theory into practice time and again with The Smiths, contributing everything from the Motown-style motifs propelling This Charming Man to the jaywalking rockabilly of Rusholme Ruffians and the Bernard Edwards-esque funk he inserted into Barbarism Begins At Home.

At the opposite end of the spectrum, drummer Mike Joyce first cut his teeth playing with Manchester punk outfits Victim and The Hoax but, as his impressive work on tracks such as What She Said and The Queen Is Dead proves, his hard-driving style was ideal for The Smiths. The band’s soundman Grant Showbiz noted in Richard Carman’s Johnny Marr: The Smiths And The Art Of Gun-Slinging that while Johnny Marr’s instrumentalism and singer Morrissey’s lyric-writing was “sometimes quite a pretty, fey thing”, the key to the band’s unique blend came from Joyce’s drumming “nailing it and making it dirty and hard”.

“They knew they were good”: Morrissey and Marr

At the very heart of The Smiths, however, was the partnership between Morrissey and Marr. Having harboured journalistic aspirations from an early age, Morrissey had developed a remarkable ability to delve into the darkest recesses of the teenage psyche. The pop world had never previously encountered a writer with such an allusive lyrical style (often executed with a discernible literary bent and with room for both sly humour and devastating melancholia), and as soon as Morrissey got a few early classics such as Hand In Glove, This Charming Man and Jeane under his belt, it was apparent a highly original talent was flourishing.

Morrissey hit ever-higher peaks as a wordsmith throughout The Smiths’ career, proving himself equally adept at delving into personal issues such as alienation and vulnerability (has any other pop song ever painted such a vivid portrait of abject loneliness as How Soon Is Now?) as he was addressing big issues such as vegetarianism (Meat Is Murder), the British monarchy (the searing The Queen Is Dead) or calling out the “belligerent ghouls” abusing their positions of power in The Headmaster Ritual’s anti-bullying treatise.

Crucially, Morrissey also met his ideal creative foil in Johnny Marr. The band’s founding member and musical director, Marr (born John Maher) was obsessed with pop music long before he hit his teens; he brought not only his unstinting work ethic, but also his skills as a guitarist, songwriter, arranger and producer to bear on all The Smiths’ classic songs from Reel Around The Fountain to There Is A Light That Never Goes Out.

Feeling a kinship from the word go, Morrissey and Marr initially bonded over a mutual love of artists such as Dusty Springfield, Patti Smith, the New York Dolls and T.Rex. To The Smiths’ benefit, Marr was an especially tasteful guitarist with no truck with the flashier proponents of his chosen instrument. In an early Melody Maker interview he revealed, “I have never seen the guitar as a solo instrument – when I started to write songs, I wanted my guitar to sound like a whole record,” and he brought this sculpted conciseness to the music he put to Morrissey’s words. The pair set about writing songs with the discipline of Brill Building-era songwriting teams such as Jerry Lieber and Mike Stoller, often writing songs in batches of three at a time.

“They had such a propelling creativity,” Rough Trade Records boss Geoff Travis told the BBC in 2003. “If they had a Top Of The Pops show on Tuesday, they would be rehearsing on the weekend and writing new songs. They knew they were good, but they didn’t let it consume them.”

Significantly, quality always kept pace with quantity throughout The Smiths’ career, with even their B-sides and deep cuts (including dazzling tracks such as These Things Take Time, Back To The Old House, Rubber Ring and Sweet And Tender Hooligan) ensuring that the compilations Hatful Of Hollow, The World Won’t Listen and Louder Than Bombs remain as essential as the band’s four official studio albums.

It’s also important to remember The Smiths offered a tangible alternative to the airbrushed mainstream pop acts such as Dollar, Bucks Fizz and Culture Club holding sway when the group first emerged. They were the first indie outsiders to achieve mainstream success on their own terms, even scoring a bona fide UK No.1 with their second album, Meat Is Murder, while their longevity has enjoyed a further boost because their recordings largely eschewed the omnipresent synthesisers and glossy production techniques that sucked the soul out of so many records issued during the mid-10s.

A light that never goes out: influence and legacy

Since their demise in 1987, The Smiths’ influence has been all too easy to spot in successive generations of nascent stars, with their DNA clearly detectable in bands of a jangly pop persuasion, ranging from The Stone Roses to The Cranberries and Blur, through to The Libertines and US anglophiles The Killers. Elsewhere elements of The Smiths’ aesthetic have been stealthily repackaged. While Morrissey’s penchant for charity-shop chic, hearing aids and NHS specs appealed to the incumbents of every lonely bedsit throughout the land during The Smiths’ heyday, Pulp’s Jarvis Cocker took up the mantle for championing the next generation of outsiders and misfits at very height of Britpop.

Both Morrissey’s fiercely intelligent, bookish lyrics and his choice of images of cult film and TV stars for The Smiths’ album and single covers was also later mirrored by renowned Scottish indie-pop outfit Belle And Sebastian, whose frontman, Stuart Murdoch, has freely admitted The Smiths were his primary influence when he launched his own critically-acclaimed band. Closer to home, the fierce regional pride which bled through in references to the band’s home city in the lyrics to songs such as Miserable Lie and Suffer Little Children galvanised the young Noel Gallagher into action. The future Oasis superstar told the BBC in 2003 that “when The Jam split, The Smiths started and I totally went for them”.

“The legend has remained intact”

Unlike many bands warranting retrospectives, it’s heartening to realise that all four Smiths are still around to add to their CVs. Mike Joyce and Andy Rourke have since gone on to work with artists ranging from Sinead O’Connor to PiL and Julian Cope, while Morrissey has gone from strength to strength since the release of his first solo album, 1988’s Viva Hate, and Johnny Marr’s remarkable post-Smiths career includes widely-acclaimed collaborations with The The, Mouse On Mars and Hans Zimmer. However, the songs they wrote together as The Smiths will arguably always define them; they still have the power to make us laugh, cry and maybe even save our lives. Simply put, they are unique songs which still touch people and remain relevant to this day.

“They wrote some truly great songs,” The Smiths’ first manager, Joe Moss, told the BBC in 2013. “The songs were fantastic musically and great lyrically, and that’s a tricky thing to get right. It’s like a James Dean thing, the legend has remained intact ever since. They didn’t get to the point where they were making albums that nobody cared about.”

Shop The Smiths on Vinyl