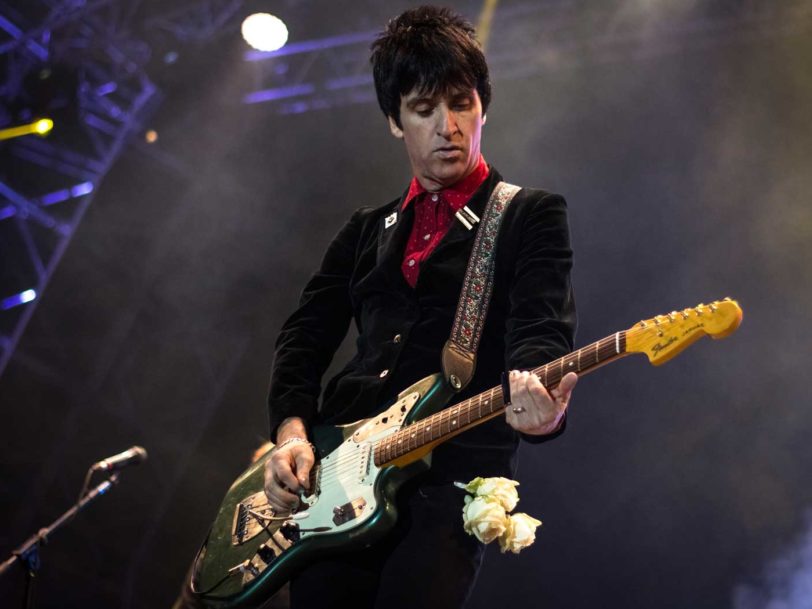 Creating entirely new styles of playing, the best Johnny Marr guitar parts reveal him to be an era-defining guitarist.

With a multi-dimensional career spanning game-changing works with The Smiths, and significant roles with Modest Mouse and as one half of Electronic (with Bernard Sumner), Johnny Marr, born on 31 October 1963, has become an era-defining guitarist. Across five decades of music-making, the best Johnny Marr guitar parts have seen him create entirely new styles of playing with his melodic, attitude-soaked arpeggios.

From Electronic’s 1999 album, Twisted Tenderness, Johnny Marr’s guitar work creates a cross between the blues and electronic music, resulting in a futuristic sound. From the funky wah-wah riffs, to a stripped-back acoustic rhythm guitar, Make It Happen shows how the best Johnny Marr guitar parts are often multi-faceted.

9: The The: Sodium Light Baby

While Johnny Marr has only featured twice in The The’s discography, he made a lasting impression on their 1993 album, Dusk. Sodium Light Baby opens with a riff reminiscent of Jimi Hendrix’s Voodoo Child (Slight Return), highlighting Marr’s masterful use of the wah-wah pedal. The guitar work truly shows off the full effect of his ability to create timeless grooves.

With his 2013 solo album, The Messenger, Johnny Marr intentionally set out to create a simplistic record that would please his fans, saying, “I wanted it to sound effortless, not like I was trying to reinvent the wheel.” The title track achieves just this, with guitar riffs that create a vibe reminiscent to Marr’s work with The Smiths. The simplicity of the guitar creates space for the listener really absorb the lyrics and come up with their own interpretations.

Though he wasn’t yet an official member of the band, Dashboard marked the beginning of Marr’s involvement with Modest Mouse. On creating the song, Marr said, “I just started playing Dashboard, which I’d been playing a few weeks before and forgotten about. And [Modest Mouse frontman Isaac Brock] instantly started improvising the lyrics, which knocked me out.” The organic nature of the song’s composition shows through, with variations of the guitar riff filling out the spaces, creating a groovy, dance-like quality to a quite nihilistic song.

6: Talking Heads: (Nothing But) Flowers

(Nothing But) Flowers describes a modernist nostalgia for concrete lands and a consumerist society. An unusual cross between pop and tropical music, it benefitted from one of the best Johnny Marr guitar parts, played the Bundhu Boys’ tradition. A style that not necessarily associated with the guitarist, he plays a cheerful lead guitar that drives the song with a fun energy.

The transgressive nature of the lyrics to Nowhere Fast is complimented nicely by rock’n’roll-style guitar breaks given a country twang. While Johnny Marr has said that the song “could have been done better”, his riff creates an interesting sound that breaks up the track’s chugging repetitiveness. With shifting movements between major and minor sevenths, his slides up and down the guitar neck create a unique sound for The Smiths.

4: The Smiths: Some Girls Are Bigger Than Others

Fading in and out unexpectedly, the introduction to Some Girls Are Bigger Than Others earns its place among the best Johnny Marr guitar parts: an innovative feature of Marr’s, it has the effect of opening and closing a door. Marr’s captivating guitar melody creates a relaxed sound with hidden dissonance in his cross-picking. The fade out at the end not only completes the song in a full-circle way, but effectively concludes the sentiments of The Smiths’ The Queen Is Dead album in its entirety, making it the perfect closing track.

3: The Smiths: This Charming Man

The Smiths performed This Charming Man on their Top Of The Pops debut in 1983, earning them widespread acclaim in the process. Performing directly after Tina Turner’s Let’s Stay Together, The Smiths immediately struck the audience as something new. Marr’s repeated guitar riff makes for an effortless, buoyant feeling, while the unique guitar sound was a work of experimentation, with Marr describing the process: “There are three tracks of acoustic, a backwards guitar with a really long reverb, and the effect of dropping knives on the guitar – that comes in at the end of the chorus.”

One of The Smiths’ most iconic songs, Marr contributes a spacy, psychedelic guitar sound on How Soon is Now? The unique effect was created through innovative studio work: Marr played the original guitar track in a rather straightforward way onto tape, which was subsequently played backwards through three Fender Twin Reverb amplifiers. The riff was used in the trailer for season four of The Crown.

From The Smiths’ 1986 album, The Queen is Dead, Marr’s rapid strumming on Bigmouth Strikes Again earns its well-deserved place at the top of our list of the best Johnny Marr guitar parts. Marr has said that the riff was his attempt at The Rolling Stones’ Jumping Jack Flash: “I wanted something that was a rush all the way through.” He certainly achieved that, with his energetic strumming pushing the song forward. The opening guitar lines also echo Nancy Wilson’s work on Heart’s classic song Crazy On You.