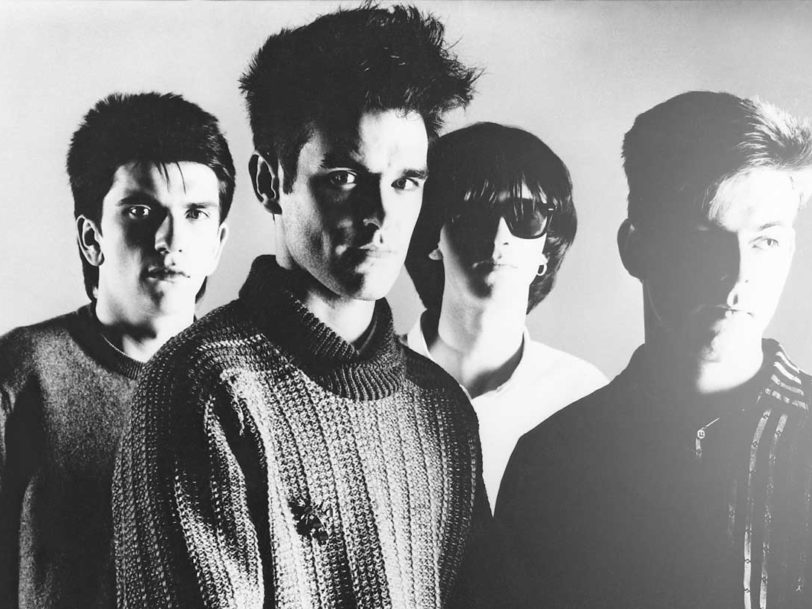 An immediate hit on the UK’s indie chart, The Smiths’ debut single, Hand In Glove, played a crucial role in the group’s subsequent success. First released the spring of 1983, this stellar guitar-driven anthem went against the grain at a time when glossy, synth-driven songs ruled the airwaves, but it got the nascent Manchester quartet noticed, and it quickly set them on the road to stardom.

“That record set the standard,” drummer Mike Joyce told Record Mirror in September 1984. “When Johnny [Marr, guitarist] played me their first demo tape, I thought it was the best thing I’d ever heard, both musically and lyrically. It was a once in a lifetime opportunity and too good to miss, so I leapt at it as quickly as possible.”

The Smiths were united in their belief that Hand In Glove was a song of real quality, yet it fell into place almost by osmosis. The song’s origins can be traced back to an evening late in 1982, when the band’s primary tunesmith, Johnny Marr, decided to mess around with an old toy guitar at his parents’ house.

“I was playing this riff that I thought was a Chic hit,” Marr told Radio X during a 2018 interview. “I thought, I really like that, but I had no means to record it.”

However, The Smiths’ frontman, Morrissey, had a tape recorder, and Marr’s then girlfriend – now wife – Angie, fresh from passing her driving test, had loan of her parents’ car. “I said, ‘Get me round to Mozzer’s!’… So we got in the car like I was going to have a baby, you know?”

“Hand In Glove was essential – those words had to be sung”

Determined not to forget his new riff, the guitarist played it over and over during the journey to Morrissey’s house, though Angie – an avowed Iggy Pop fan – also threw in a suggestion which inspired Marr to make a crucial refinement to his promising new idea.

“She said, ‘Make it sound like Iggy!’” Marr recalled. “So I just took that Nile Rodgers thing and just played Iggy Pop chords. She said, ‘Yeah that’s cool!’ And I was like, ‘Oh really!’”

Fortunately for Marr, Morrissey was at home and able to produce his tape recorder. Indeed, the singer was so impressed by Marr’s melody that he reputedly wrote the song’s entire lyric in just two hours. By the time the band got hold of it and further honed the arrangement, The Smiths’ four members were convinced Hand In Glove was their strongest song to date.

Knowing they couldn’t let the grass grow under their feet, the band asked their then manager, the late Joe Moss, to fund the recording of Hand In Glove at Stockport’s Strawberry Studios in February 1983. At this stage, the band had played just a mere smattering of gigs in Manchester, but their belief in their putative debut single was unshakeable, and they captured a superb version of the song during a one-day session which they produced themselves.

Now revered as one of the best Smiths songs, Hand In Glove certainly had that indefinable something that makes all great tracks stand out. Musically, the whole band put in a terrific performance, with Mike Joyce’s insistent beat driving what biographer Simon Goddard called Marr’s “Marr’s rain-soaked… minor chord wash” and one of Andy Rourke’s “most inspired bass patterns”. Yet if the music sounded deceptively euphoric, Morrissey’s striking lyrics – which included remarkable lines such as, “Though we may be hidden by rags/We’ve something they’ll never have” – exuded an equally compelling mix of pride, defiance and desperate sadness.

“It was to be our first record and it was important to me that there’d be something searingly poetic in it, in a lyrical sense, and yet jubilant at the same time,” Morrissey explained in an interview with Star Hits in 1985. “Being searingly poetic and jubilant was, I always thought, quite difficult because they’re two extreme emotions and I wanted to blend them together.”

Simon Goddard later declared Hand In Glove to be a “shattering left-hook of self-loathing, loss and desperation”, and the song hit Rough Trade label boss Geoff Travis right between the eyes when Marr and Rourke took a tape of it down to London in April 1983. When Marr handed over the recording (which also included a live version of another early Smiths classic, Handsome Devil), he said, “Would you listen to this, it’s not just another tape.” Impressed by Marr’s self-belief, Travis promised he would, later telling The Face, “I was helplessly won over.”

“It really was a landmark… a complete cry in every direction”

The following Monday, Travis called the group and invited them back to London to release Hand In Glove, backed with Handsome Devil, on Rough Trade as The Smiths’ debut single. Both parties agreed to a temporary arrangement before committing to any long-term partnership.

Accordingly, Hand In Glove was rush-released on 13 May 1983, in a sleeve that featured an ambiguous photo of model George O’Hara which set the tone for all future Smiths artworks. The song failed to enter the UK’s mainstream singles chart, but it peaked at No.3 on the indie listing, and sold consistently for the next 18 months. More importantly, it raised The Smiths’ profile immeasurably, helping them procure their first major live reviews in the music press, and their first radio session with BBC Radio 1 DJ John Peel.

The song was later remixed for inclusion on The Smiths’ self-titled debut album, and it finally broached the UK Top 30 in 1984, when one of Morrissey’s biggest idols, Sandie Shaw, recorded her own inimitable version, with Marr, Rourke and Joyce acting as her backing group.

“I won’t rest until that song is in the heart of everything,” Morrissey told Jamming magazine early that year. “It was so urgent – to me, it was a complete cry in every direction. It really was a landmark. There is every grain of emotion that has to be injected into all the songs and it worked perfectly with Hand In Glove. It was as if these four people had to play that song – it was so essential. Those words had to be sung.”