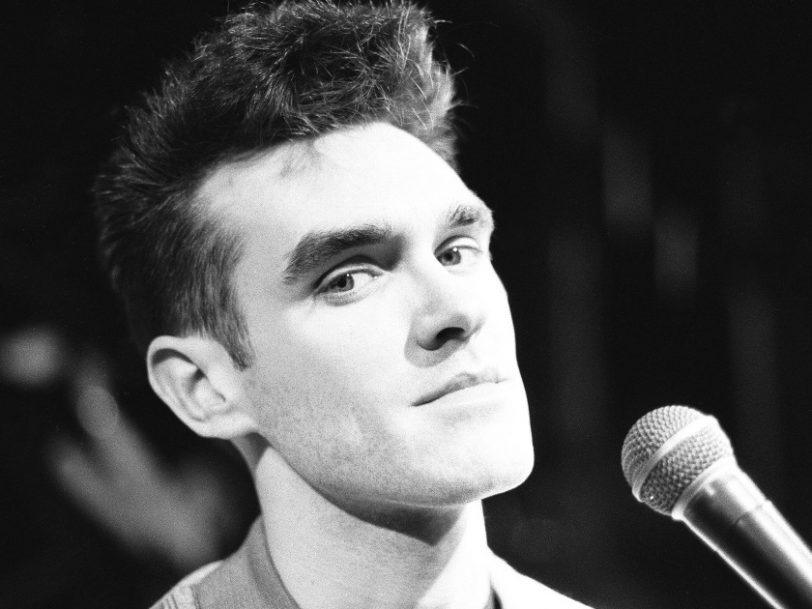 It’s fair to suggest that most contemporaneous fans of The Smiths vividly recall the moment their heroes announced their split, in the late summer of 1987. Instigated by guitarist Johnny Marr’s initial decision to quit the group, The Smiths’ demise sent shockwaves through the music scene and united British music fans in a collective grief not seen since Paul Weller disbanded The Jam in 1982. However, in the same way that Weller soon re-established himself with The Style Council, Morrissey rapidly re-emerged with Viva Hate: a dynamic solo debut album which immediately appeased with his ardent fan base.

“I love what you sent me. I’m going to make a solo record”

Topping the UK charts, Viva Hate granted Morrissey a dream start to his solo career, but the idea of him pulling off such a coup was by no means a given. As his former band’s primary sonic architect, Johnny Marr was well-placed to accept high-profile post-Smiths offers of work from The The, Talking Heads and Kirsty MacColl, but while Morrissey was a stellar lyricist and indie-pop’s most iconic figure, he now needed new musical collaborators.

Exploratory sessions aimed at creating a putative Smiths Mk II with bassist Andy Rourke, drummer Mike Joyce and Easterhouse guitarist Ivor Perry foundered. However, another insider from The Smiths’ camp provided Morrissey with the impetus he needed to go solo.

“I’d been working on these four-track demos at home, just for my own pleasure,” producer Stephen Street told Mojo in 2003. “I’d sent Morrissey a tape of these, saying, ‘Please don’t think I’m being presumptuous, you probably won’t like these, but if there’s anything you think could be turned into a B-side for any singles off [The Smiths’ final album] Strangeways…’

“I then got married and went on honeymoon,” Street continued. “I came back to find a postcard from Morrissey, saying, ‘I love what you sent me. I’m going to make a solo record, are you interested?’ Of course I was interested!”

“I’d wanted to work with Morrissey for a long time”

Morrissey initially considered recalling Andy Rourke and Mike Joyce for the Viva Hate sessions, but as Street later told Super Deluxe Edition, “I guess he thought that for it to be truly regarded as a Morrissey solo record, he’d have to make a break from them.”

The ex-Smiths partners in rhythm returned to play on later Morrissey solo singles The Last Of The Famous International Playboys and Interesting Drug, but for Viva Hate, Stephen Street himself played bass alongside ex-Bucks Fizz session drummer Andrew Paresi and guitarist Vini Reilly, best known as the mainstay of Factory Records act The Durutti Column. The latter was particularly intrigued by the prospect of making the record.

“Stephen Street asked me if I would attend a meeting in London with him and Morrissey, whom I’d never previously met,” Reilly later told Mojo. “We met up and listened to some demos that Stephen had recorded. They suggested I might play guitars and keyboards on an album. Stephen told me later that he’d been really nervous before this meeting… But the atmosphere at the meeting was lovely. I’d wanted to work with Morrissey for a long time.”

The collective apprehension experienced by Morrissey’s new team wasn’t surprising, as everyone knew that the weight of expectation rested heavily upon Viva Hate. Speaking in 2012, Stephen Street recalled feeling “swept away in a wave of enthusiasm, because obviously this was a marvellous opportunity”. His giddiness was, however, tempered by the fact the record had to succeed, as “Morrissey must have been the most revered pop star in the country” at the time.

Nonetheless, after the crew decamped to Bath’s Wool Hall Studios for the Viva Hate sessions, they realised they had the material to make the record of real substance that Morrissey’s fans demanded.

“I was submitting ideas to push the envelope”

In the same way that there was a sense of The Smiths trying different things with Strangeways, Here We Come, Street said, “When Morrissey wanted to do a solo record it meant that the horizons could be broadened slightly. For example, when I gave him the track that became Break Up The Family, I was quite surprised he went for it, because the general idea for that was to have quite a soul-y, funky backing track. I was submitting ideas like this to push the envelope and keep him interested.”

Morrissey later told Melody Maker that the excellent Break Up The Family was one of several Viva Hate songs relating to a period in his life “in 1972, when I was 12, 13… about a string of friends I had who were very intense people”. This same period inspired Morrissey’s lyrics for the album’s centrepiece, the grandiose, seven-minute Late Night Maudlin Street, though – perhaps more surprisingly – Joni Mitchell’s catalogue influenced the song’s musical backdrop.

“I was still writing music during the sessions at The Wool Hall sessions,” Street told Mojo. “I remember Morrissey asking me to come up with something a bit like Joni Mitchell. He wanted this long, rambling structure, so I came up with something that was kind of inspired by Joni Mitchell’s The Hissing Of Summer Lawns. That became Late Night Maudlin Street.”

“As soon as Morrissey put the vocal on, it became something different”

Describing Morrissey’s vocal on Late Night Maudlin Street as “astonishing” and remembering it as one of “many moments when the hair stood up on your neck”, Vini Reilly also recalled that Viva Hate’s glorious lead single, Suedehead, was influenced by another eminent US singer-songwriter.

“One night, Morrissey wanted to play me a CD,” Reilly told Mojo. “He put it on at extremely loud volume and I was a bit surprised to find it was Rickie Lee Jones. It was one particular track called The Last Chance Texaco… This was a subtle guide from Morrissey for the mood he wanted on [Suedehead].”

A similar sense of daring sonic adventurism informed most of Viva Hate’s key tracks, from the album’s abrasive, feedback-ridden opener, Alsatian Cousin, to the anti-Thatcherite venom of its sombre denouement, Margaret On The Guillotine. The record also included one of the best Morrissey solo songs, Everyday Is Like Sunday, though, as Stephen Street recalled, his emotive vocal and memorably ennui-stricken lyric about “the seaside town they forgot to close down” took the song in a whole different direction.

“Everyday Is Like Sunday was one of the oldest pieces of music I brought to Morrissey,” he told Mojo. “With that song, I was thinking along the lines of Echo And The Bunnymen. But, as soon as Morrissey put the vocal on, it became something different altogether.”

Everyone involved recalls the Viva Hate sessions with fondness, with Vini Reilly remembering recalling going for “long walks in the countryside” with Street and Morrissey during down time. The album also came together remarkably quickly. Work began just weeks after The Smiths’ split, and the record was done and dusted before Christmas.

Apprehension initially remained as to how Viva Hate would be received, but after Suedehead cruised to No.5 in the UK charts, it became clear that Morrissey and company were onto a winner. Released on 14 March 1988 and buoyed by excellent reviews, including a positive critique from Rolling Stone (“Viva Hate reveals the talents of its maker: innocent vocal hooks and vivid guitar riffs belie twisted lyrics full of the usual bizarre imagery, provocative observations and campy asides”), the album went gold on both sides of the Atlantic, proving categorically that Morrissey could assail the mainstream on his own terms.

“It’s one of my favourite works in the sense that I know what effort was put into it, and how we worked against all the odds to come up with a record as good as that in such a short period of time,” Stephen Street said in 2012. “I’m very proud of what we achieved with Viva Hate, and I rate it as a very big milestone in my own career, too.”

Found out which ‘Viva Hate’ songs rank among our best Morrissey lyrics of all time.