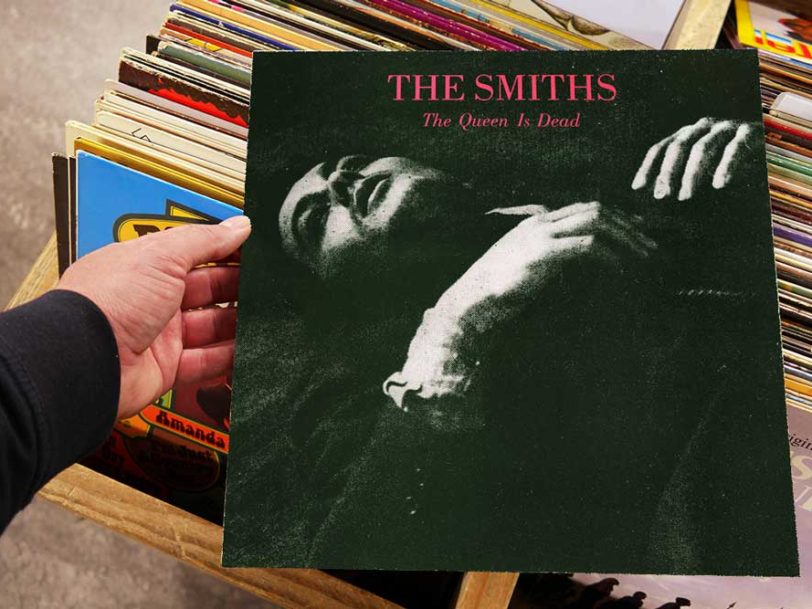 The Queen Is Dead: How The Smiths Birthed A Classic Album

Capturing the zeitgeist and casting inspiration down the decades, The Smiths’ third album, ‘The Queen Is Dead’, reigns supreme.

While it’s hard to dispute the BBC’s retrospective claim that The Smiths were “the band that inspired deeper devotion than any British group since The Beatles”, you could argue that it took until the release of their third album, The Queen Is Dead, for the group to create a record that matched the promise of their early singles.

The band’s string of classic early singles, from Hand In Glove to How Soon Is Now?, showed exactly why critics ranked Morrissey and Johnny Marr among the most gifted – and original – songwriting teams of their era, yet initially The Smiths faltered on the album front. Their self-titled debut, from 1984, was a potential classic blunted by John Porter’s fussy production, and while their UK chart-topping second, Meat Is Murder, was an undeniably fine record, it still wasn’t quite the “Eureka!” moment their fans craved.

“It was obvious The Smiths were special”

The Smiths, however, were on a roll after the release of Meat Is Murder. They gigged constantly throughout 1984 and 1985, finding ample opportunity to hone promising new songs during soundchecks. In the studio, too, they’d worked up an excellent working relationship with their young engineer, Stephen Street. The two parties first worked together on The Smiths’ fourth single, Heaven Knows I’m Miserable Now, and Street had deftly handled the console while the band took over production for Meat Is Murder. This fruitful partnership would soon play a decisive role in the creation of The Queen Is Dead. “It was obvious [The Smiths] were special,” Street said in an interview for Sound On Sound in 2005. “Morrissey, Johnny and I had a really good working relationship – we were all roughly the same age and into the same kind of things, so everyone felt quite relaxed in the studio.”

Everyone involved certainly felt a frisson of excitement when they finished The Boy With The Thorn In His Side, the first song to be recorded for The Queen Is Dead, in July 1985. A seemingly effortless pop song with a glorious, aching melody, it was laid down as a demo in a small Manchester studio, but deemed good enough for release as a single, reaching No.23 in the UK charts in September.

Excited by this initial salvo, Morrissey and Marr embarked on intensive songwriting sessions during the late summer of 1985, with The Smiths then moving to London’s RAK Studios to cut The Boy With The Thorn In His Side’s admirable B-sides, Rubber Ring and Asleep. The same session also yielded two further The Queen Is Dead highlights courtesy of the light-hearted Some Girls Are Bigger Than Others and the proto-Britpop anthem Bigmouth Strikes Again.

With those tracks all safely in the can, The Smiths and Stephen Street decamped to Jacobs Studio in Farnham, Surrey, where they completed the bulk of The Queen Is Dead across the winter of 1985-86. A residential complex inside a roomy Georgian manor house, Jacobs offered the band the perfect ambience to work; they took full advantage, eventually emerging with the career-defining album they’d promised all along.

After a snatch of Cicely Courtneidge singing the World War One-era standard Take Me Back To Dear Old Blighty (from Bryan Forbes’ 1962 film, The L-Shaped Room), the album opened in style with its titanic title track. Built around Mike Joyce’s rumbling toms, a killer Andy Rourke bassline and Marr’s atypically aggressive, James Williamson-esque guitar, this searing, six-minute workout captured The Smiths hitting visceral new heights, its animated backdrop provoking an on-form Morrissey into lambasting the British monarchy (“Charles, don’t you ever crave, to appear on the front of The Daily Mail?/Dressed in your mother’s bridal veil”), with numerous examples of his singular Wildean wit.

What followed was less explosive, but equally rich and diverse, with Morrissey reputedly taking a swipe at Rough Trade label boss Geoff Travis on the ribald Kinks-ian vaudeville of Frankly, Mr Shankly and hitting back at critics and plagiarists alike on the deceptively jaunty jangle-pop of Cemetry Gates.

Elsewhere, repeated exposure to tracks such as the prowling, dirge-like Never Had No One Ever and the quirky, rockabilly-flavoured Vicar In A Tutu quickly helped them to gain in gravitas. Along with the record’s title track, however, both I Know It’s Over and There Is A Light That Never Goes Out stood out as future classics from the very first listen.

One of Morrissey’s starkest ruminations on love, loneliness and what lies beyond (“You see, the sea wants to take me/The knife wants to slit me”), I Know It’s Over was The Queen Is Dead’s epic ballad and it was performed with admirable restraint, reportedly captured late in the evening with all the studio lights down low.

There Is A Light That Never Goes Out, meanwhile, was simply something else. Opening with an intro motif referencing The Rolling Stones’ cover of Marvin Gaye’s Hitch Hike, this remarkable vignette benefitted from one of Marr’s most finely-wrought arrangements and a discreet, yet emotionally affecting string arrangement. The music itself was poignant enough, but when Morrissey added an unforgettable lyric about doomed romanticism in the most literal sense (“If a ten tonne truck kills the both of us/To die by your side, well the pleasure, the privilege is mine”) There Is A Light That Never Goes Out emerged as The Queen Is Dead’s high point and arguably The Smiths’ greatest song of all.

Released on 16 June 1986, The Queen Is Dead went platinum in the UK and later followed up with a gold disc in the US, but its cultural cachet has long since outstripped its commercial performance. The album’s arrival was greeted almost unanimously with five-star reviews – most of which homed in on how The Smiths had captured the zeitgeist and delivered their long-awaited masterpiece – and that feeling has only intensified with the passing of time, as The Queen Is Dead now ranks highly in any number of “classic album” polls.

The Smiths would later bow out with the more sonically daring Strangeways, Here We Come, but in terms of faultless execution and influence down the decades, it’s still The Queen Is Dead that reigns supreme.