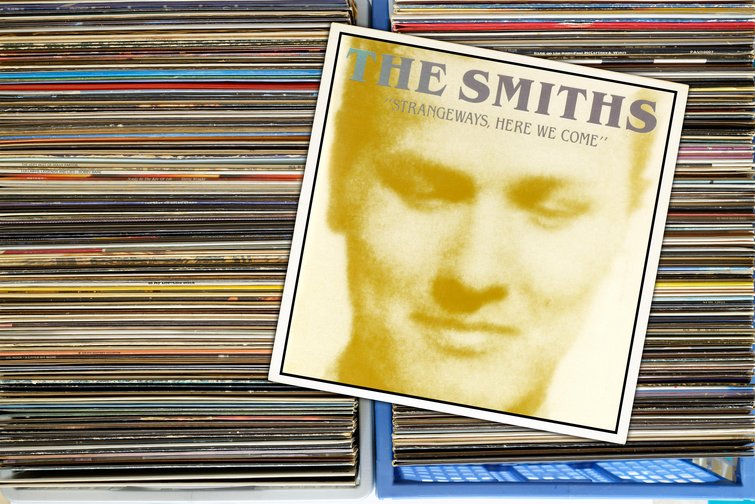 ‘Strangeways, Here We Come’: Behind The Album That Broke The Smiths

The circumstances surrounding its creation have always undermined the impact of The Smiths’ final album, Strangeways, Here We Come. Less enlightened critics dismissed it as a damp squib following the big bang of the monolithic The Queen Is Dead, and the album’s supposedly fraught recording sessions are often given as the cause of guitarist Johnny Marr’s departure – and the band’s subsequent split – prior to the album’s release on 28 September 1987.

Divorced from the times, though, Strangeways, Here We Come (its name referring to Manchester’s notorious prison) cries out for reappraisal. Far from the runt of a spectacular litter, it’s arguably the band’s most sonically adventurous album and, in reality, the sessions that produced it were lively and harmonious.

“I was in my element”

Holed up at Tears For Fears’ studio, The Wool Hall, in Bath, The Smiths worked closely with co-producer Stephen Street and, aside from Morrissey, who reputedly preferred an early night and his Sylvia Plath anthology, they often partied during down-time. In his 2016 autobiography, Set The Boy Free, Johnny Marr recalled the Wool Hall sojourn with fondness. “I was in my element,” he wrote. “I didn’t need to know what was going on in the outside world or see anyone other than the band and [my girlfriend] Angie… and I loved the new songs.”

The Mancunian quartet’s recent singles – the dense, anthemic Shoplifters Of The World Unite and the glam rock-inspired Sheila Take A Bow – served notice that The Smiths were keen to break new ground. Morrissey and Marr were of a mind that Strangeways, Here We Come would help The Smiths slough off their reputation as purveyors of jangly indie-pop.

Prior to the sessions, Marr had absorbed envelope-pushing albums such as The Walker Brothers’ early singles and The Beatles’ “The White Album”, and his desire for his own band to broaden their horizons was all too apparent on Strangeways, Here We Come’s opening cut, A Rush And A Push And The Land Is Ours. Though Morrissey’s lyric revisited familiar themes of unrequited love (“Oh, don’t mention love/I’d hate the strain of the pain again”), the song’s sparse, otherworldly backing track provided a notable departure, with Marr’s eerie piano motifs replacing his trademark layered guitars.

When Marr did pick up his guitar, he often played with the level of aggression he’d first displayed on The Queen Is Dead’s storming title track. I Started Something I Couldn’t Finish was driven by his serrated, glam-rock riffs, while he dropped a metal-handed knife onto his Telecaster to enhance his arsenal on the rousing Stop Me If You Think You’ve Heard This One Before. Bassist Andy Rourke and drummer Mike Joyce, meanwhile, demonstrated their own dexterity during the slow, menacing build of Death Of A Disco Dancer, while even Morrissey threw some atonal, yet strangely effective piano licks in for good measure as his comrades went for the burn during the song’s hypnotic, Can-esque final coda.

However, while Strangeways, Here We Come captured The Smiths embracing new sounds and textures, they hadn’t entirely fallen out with classic guitar pop. Indeed, the album included several of the band’s defining moments, courtesy of Last Night I Dreamt That Somebody Loved Me, Paint A Vulgar Picture and I Won’t Share You.

Buoyed by swirling strings and one of Marr’s most dashing arrangements, the majestic Last Night I Dreamt That Somebody Loved Me took The Smiths’ traditional bedsit angst and repurposed it with a cinematic splendour worthy of Ennio Morricone. It was topped and tailed by one of Morrissey’s finest vocals – reputedly nailed in one take – yet the abject loneliness in his lyric (“No hope, no harm/Just another false alarm”) and the absence of the singer’s usual bon mots only added to its potency.

Morrissey’s singular performance also significantly elevated the anti-music-biz rant Paint A Vulgar Picture. It’s not unusual for aggrieved artists to launch verbal daggers at their labels, but lines such as “Best of, most of, satiate the need/Slip them into different sleeves, buy both and feel deceived” found The Smiths’ frontman laying into arcane industry practices and the idea that death sells with a cleaver-sharp accuracy that still stings.

By contrast, Strangeways, Here We Come’s peak was surely its gentlest track, the closing I Won’t Share You. With Morrissey’s vocal accompanied by a discreet Rourke bassline and Marr picking out the melody on an ancient lyre found in a forgotten corner of the studio, this tender, wistful postscript (“I’ll see you somewhere/I’ll see you sometime/Darling…”) immediately took on an extra poignancy after Marr quit the band during the summer of 1987, citing a combination of exhaustion and disaffection with a variety of business and management-related issues.

Inevitably, the story of the 80s’ most influential British guitar band losing their primary sonic architect dominated the UK press, and while denials were briefly issued, The Smiths publicly announced their split before Strangeways, Here We Come hit the streets. Sadly, the fallout from the band’s demise overshadowed the fact that they’d bowed out with a fantastic record that should have opened their next chapter instead of providing their premature epitaph.

Regardless, Strangeways, Here We Come did reap sizeable commercial rewards. It peaked at No.2 in the UK Top 40 and went gold on both sides of the Atlantic. It’s never had the same critical cachet as the seemingly unassailable The Queen Is Dead but, in recent years, discerning voices have trumpeted its quality, with Consequence Of Sound proclaiming, “Strangeways, Here We Come may not receive as much acclaim as its predecessors, but it should,” Once the dust settled, both Johnny Marr and Morrissey agreed their beloved band had split on the back of their best album.

“We’re in absolute accordance on that,” Morrissey told The Guardian in 2007. “We say it quite often. At the same time. In our sleep. But in different beds.”