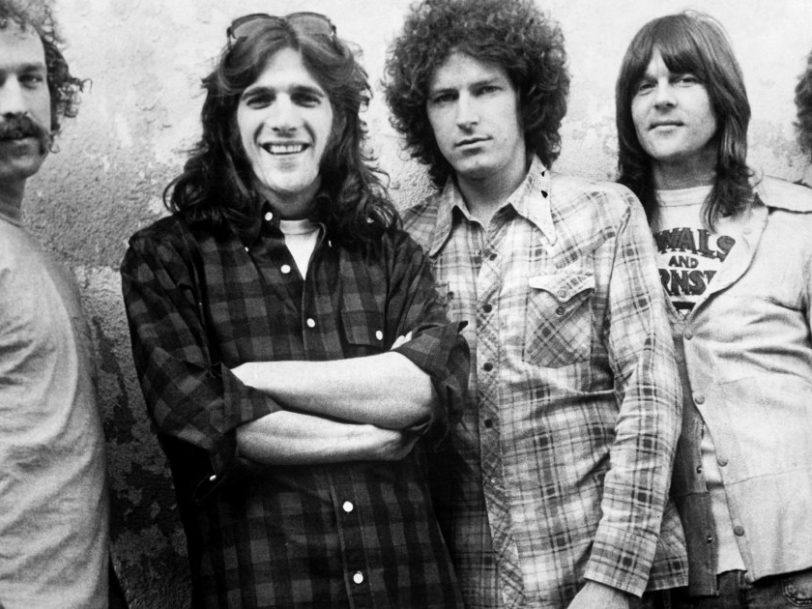 Eagles are one of the most popular bands in modern music and they have given the world some of the most iconic pop tunes ever, including Hotel California and One Of These Nights. Their ten records, including three live ones, featured great music and stunning artwork and photography. Here, then, we rank the best Eagles albums.

Listen to the best of Eagles here, and check out our best Eagles albums, below.

Long Road Out Of Eden marked Eagles’ first full studio work together in 28 years. It was an album full of political statements, such as the searing song Frail Grasp On The Big Picture (about the ignorance of Middle America) and the Grammy-winning instrumental I Dreamed There Was No War, composed by Glenn Frey. The album’s lead single, How Long, first appeared on longtime collaborator JD Souther’s 1972 debut solo album, John David Souther.

The 2020 concert album Live From The Forum MMXVIII was the first Eagles record to feature new band members Deacon Frey and Vince Gill alongside Don Henley, Joe Walsh and Timothy B Schmit. The 26 tracks, taken from three nights at The Forum, an indoor arena in Inglewood, California, covered the spectrum of the band’s superb back catalogue, including classics such as Lyin’ Eyes. For freshness, the album featured hits recorded by individual members, among them Gill’s catchy country song Don’t Let Our Love Start Slippin’. When actor and Eagles fan Jack Nicholson was asked for the secret of the band’s success, he summed it up in one word: “Repertoire.”

“We never broke up, we just took a 14-year vacation,” announced Glenn Frey before Eagles launched into a slick version of Tequila Sunrise on their live album Hell Freezes Over. It was Don Henley who, after the band broke up, joked that they would only reform “when hell freezes over”, but back they were for this 1994 MTV concert. It marked the group’s second live album, and contained four new studio tracks, including the rocking opener Get Over It. The band sounded as accomplished as ever on the recording, and there is a particularly pleasant acoustic version of Hotel California. Hell Freezes Over went to No.1 on the Billboard chart and sold more than nine million copies.

Must hear: The Girl From Yesterday

One key factor in the success of On The Border, an album that reached No.17 in the US and was certified double-platinum, with sales of more than two million copies, was the introduction of guitarist Don Felder, who was a long-term friend of Eagles co-founder and guitarist Bernie Leadon. Unique among the best Eagles albums, On The Border is to some extent the tale of two producers. Two of its songs – You Never Cry Like A Lover and Best of My Love – were produced in London by Epsom-born Glyn Johns, before a bust-up prompted the band to leave England and hire Bill Szymczyk to produce the rest of the record in Los Angeles. The band were trying out new material on the album, including a countrified version of Tom Waits’ masterful ballad Ol ’55.

Must hear: On The Border

Eagles were going through a difficult, fractious time when their first live album was in production, and there is a certain tense energy in some of the performances on Eagles Live, especially the version of Life In The Fast Line. A collection of 15 songs recorded from 1976 to 1980 at three California venues (The Forum in Inglewood, plus Santa Monica Civic Auditorium and Long Beach Arena), the album also included one previously unreleased tune, a gorgeous a cappella cover of Steve Young’s Seven Bridges Road. The finest in-concert collection among the best Eagles albums, Eagles Live is best enjoyed as faithful, polished concert recreations of the studio hits.

The Long Run was recorded at a difficult time in Eagles’ history, with Don Henley later admitting the musicians were “physically, emotionally, spiritually and creatively exhausted”. Nevertheless, the record, which was produced by Bill Szymczyk, contained some sparkling moments, including the soulful Heartache Tonight, which was co-written by Glenn Frey, Don Henley, JD Souther and Detroit legend Bob Seger. The song, which featured Joe Walsh on slide guitar, reached the top spot on the Billboard Hot 100 and earned the band a Grammy Award for Best Rock Performance By A Duo Or Group With Vocal. The Long Run sold more than eight million copies and was certified platinum.

Must hear: In The City

As debut albums go, the eponymous Eagles was a stunning way to introduce a band to the world. The album, recorded at London’s Olympic Studios and produced by Glyn Johns, played a major part in popularising country-rock music. The ten-song collection also delivered three instant pop classics which still stand among the best Eagles songs: Take It Easy, Witchy Woman and Peaceful Easy Feeling. The record went on to sell more than a million copies and made stars of the musicians who had previously worked as a backing group for Linda Ronstadt.

Must hear: Take It Easy

One Of These Nights, featuring an award-winning example of Eagles’ album covers, remained at the top of the album charts for nearly two months and was described by Frey as “a quantum leap” for the band. The title track remains a classic. “It is my favourite Eagles record. If I ever had to pick one, it wouldn’t be Hotel California, it wouldn’t be Take It Easy. For me, it would be One Of These Nights,” Frey said. It was not the only blockbuster single on the album. Frey and Henley wrote the caustic love song Lyin’ Eyes, which also earned a Grammy award for Best Pop Performance By A Duo Or Group With Vocals, and the album – a landmark among the best Eagles albums – also contained the powerful Take It To The Limit, one of Eagles’ most beloved ballads.

Must hear: One of These Nights

Desperado, a superb concept album based on the myths of the American Old West, was recorded during a cold February in London, at Island Records’ studio in Notting Hill, where the four main musicians (singer and guitarist Frey, drummer and singer Don Henley, guitarist and singer Bernie Leadon and bassist and singer Randy Meisner) were under the direction of producer Glyn Johns. Desperado is full of imaginative songs, including Doolin-Dalton and Tequila Sunrise, a composition about a cocktail drink that was hugely popular in the 70s. The key song on the album was Desperado itself, a moving ballad written by Henley and Frey that was, according to Jackson Browne, “really the seed of the whole thing”. The dazzling artwork for the album cover was in keeping with the cowboy theme.

Since 1976, Eagles have sold more than 26 million copies of their stunning concept album Hotel California. Though it is a profoundly world-weary record – the title track is a bleak critique of modern US life, built on a reggae groove – it is a brilliantly polished work bursting with terrific songs, including Wasted Time, Life In The Fast Lane and the elegiac closing song, The Last Resort. Topping our list of the best Eagles albums, the record also boasts one of the best 70s album covers: a photo of the Beverly Hills Hotel, at 9641 Sunset Boulevard, photographed at sunset to reflect the sinister subject matter of the lyrics. Don Henley said he thought the artwork was magnificent because it summed up the atmosphere of “faded glory, loss of innocence and decadence” that was the point of the album’s title track.