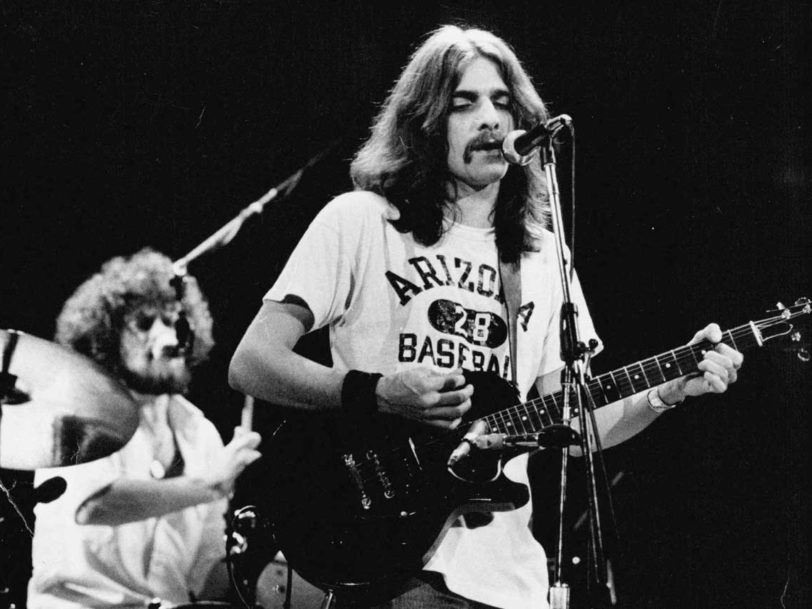 As a founding member of Eagles, Glenn Frey co-wrote and sang on some of the music that defined a generation. In September 2016, eight months after he died at the age of 67, Frey’s legacy as a songwriter was honoured with a life-sized bronze statue (depicting a long-haired, moustachioed Frey as he was in his 70s heyday) in the Standin’ On The Corner Park in Winslow, Arizona.

The park is named in tribute to Eagles’ song Take It Easy, which Frey co-wrote with Jackson Browne when they were living in the same California apartment building. Browne had written the line “Well, I’m a-standin’ on a corner in Winslow, Arizona”, but was completely stuck on how to finish the verse. Frey improvised the next line, “And such a fine sight to see/It’s a girl, my lord, in a flatbed Ford/Slowin’ down to take a look at me,” and the entire song instantly clicked into place.

The success of Take It Easy, which became a signature song for Eagles after appearing on their 1972 eponymous debut album, made it a key song in the creation of country-rock. The track not only showcased Frey’s ability to write catchy, interesting lyrics, it also proved that he was that rare thing among songwriters: a talent equally at home writing solo or in collaboration with others. “I get a lot of satisfaction from having conspirators,” he said in 1979.

“Glenn was the spark plug”: a powerhouse songwriter

It was Frey who was responsible for helping Don Henley transform the fragment of a cowboy song into the iconic hit Desperado. Henley said that he had a few scraps of a “Southern Gothic thing that brought to mind Ray Charles and Stephen Foster” but was also struggling. “Glenn leapt right on it,” Henley recalled, “made it more Western, filled in the blanks and brought structure. And that was the beginning of our songwriting partnership… that’s when we became a team.”

Frey described the creation of any song as “a pretty unpredictable set of circumstances”, whether the composition began with a particular chord or a phrase – as in the case of Life In The Fast Lane – or was sparked by Frey’s acute powers of observation. On one of their many nights out at Dan Tana’s bar in Hollywood, Frey and Henley were hanging out drinking and just people-watching. According to record executive Bob Buziak, “Someone looked up and saw an older man with an absolutely gorgeous young blond across the room. Glenn laughed, turned to us, and said, ‘Look at those lyin’ eyes!’ Everyone in the room knew it as soon as he said it. Pens and napkins flew.” Frey assembled the notes from the napkins and then created one of the great 20th-century songs about love and deception.

“We nicknamed him The Lone Arranger. He had a vision”

As well as revealing his eye for the small telling detail, Lyin’ Eyes also reflected the hard graft Frey put into the craft of writing a hit song. Frey said he remembered “how religiously” Browne worked on honing his lyrics, something that made him realise “just how much perspiration was involved” in writing a successful song. “We bust our ass to make records,” Frey told interviewer Tom Nolan in 1975. “We agonise over the lyric. We analyse every ‘and’, ‘the’ and ‘but’.”

As well as being a talented singer and guitarist, Frey became a powerhouse songwriter for Eagles, having composition credits on a number of the group’s most memorable hits, including Best Of My Love, I Can’t Tell You Why, One Of These Nights, Take It To The Limit, The One You Love, Tequila Sunrise, New Kid In Town, Heartache Tonight and Hotel California – songs that captured a sense of world-weariness that was integral to a troubled decade. Frey was also extremely adept at writing chord structures. The ones you hear on The Last Resort and on Desperado were devised by him.

“We gave Glenn a nickname, The Lone Arranger,” Henley wrote in 2003. “He had a vision about how our voices could blend and how to arrange the vocals, and, in many cases, the tracks. He also had a knack for remembering and choosing good songs.”

“The zenith of the Eagles”: Hotel California

The bestselling single Hotel California, which Frey co-wrote with Henley and Don Felder, “was the zenith of the Eagles in terms of what we wanted to say and how we put it together”, according to Frey. Opening their Hotel California album, the song reflected Frey’s belief that songs should be “cinematic” in structure, painting vivid pictures. “As far as I was concerned, being visual – to start with a picture – was the first and most important aspect of lyric-writing,” Frey told Los Angeles Times in 1993. “You can look at the list of Eagles songs from Take It Easy through to Hotel California, and in the first four lines, we put you someplace: ‘On a dark desert highway…’, for example. The openings of songs are very important, so I’ve always considered myself to be a visual songwriter.”

The opening imagistic, strangely mystical lyrics to the Grammy-winning song Hotel California proved that ambitious songwriting could go hand-in-hand with massive popular success: “On a dark desert highway/Cool wind in my hair/Warm smell of colitis/Rising up through the air/Up ahead in the distance/I saw a shimmering light/My head grew heavy and my sight grew dim/I had to stop for the night.”

Glenn Lewis Frey, who was born on 6 November 1948 in Detroit, was a classically trained pianist from the age of five who had, according to Henley, “an encyclopaedic knowledge of popular music”. In Bob Seger, Frey also found a mentor at a crucial stage of his early development. Seger encouraged the 18-year-old future Eagle to develop his own songwriting skills, to avoid spending a career covering hits by other musicians. Frey said he always remembered Seger’s advice to say the title of a song regularly in the song structure if you had a good title to exploit. “Glenn had an imagination and a talent that was just titanic,” said Seger. Having taken Seger’s advice to heart, Frey graduated from high school in June 1968 and headed straight to Los Angeles to pursue a musical career.

Frey’s early hits with Eagles demonstrated his ability to capture a sense of place and time, and were remarkably mature given his age (he was 24 when Desperado was penned). His ability to write sweeping, moving love ballads was clear from early on. One of the most impressive features of Frey as a songwriter was his ability to cover such a range of territory, from wistful ballads to philosophical anthems, from wry reflections of the outlaw life to observations on drug use and the excesses and decadence of the American Dream.

The heat is on: post-Eagles solo work

After Eagles broke up in late 1979, Frey also showed that he was capable of helping create successful solo hits while retaining his gift for storytelling. He had a No.2 Billboard chart triumph with You Belong To The City (co-written with Jack Tempchin) and further Top 20 hits with Smuggler’s Blues, True Love, The One You Love and Sexy Girl.

Smuggler’s Blues, which appeared on his 1984 album The Allnighter (and which was also penned with Tempchin), later inspired an episode of the hit television series Miami Vice, in which Frey also guest-starred. Frey also showed that he still had chops as a singer in the 80s. His most popular solo hit is the rousing The Heat Is On, which was composed by Harold Faltermeyer and Keith Forsey for the soundtrack of the 1984 Eddie Murphy film Beverly Hills Cop.

Take it to the limit: death and legacy

Frey sometimes told interviewers that songwriting was “an intimate thing”, but for a time in 1993 he shared his knowledge, when 20 students at the University Of California’s entertainment and performing arts department were lucky enough to attend a ten-week Master Class In Songwriting With Glenn Frey course at the Los Angeles campus. Frey stressed to students at UCLA his lifelong belief that good songs needed to “paint a picture”.

In 2012, Frey released the solo album After Hours, a collection of vintage pop standards. It was his final work. Frey died on 18 January 2016 from complications arising from rheumatoid arthritis, colitis and pneumonia. He was mourned by the world of music. Over five decades, Eagles sold more than 150 million records worldwide, winning six Grammy Awards and five American Music Awards. The group’s Their Greatest Hits (1971-1975) compilation had become the biggest-selling album of all time. “Glenn was the one who started it all. He was the spark plug, the man with the plan,” said Henley.

Frey’s songwriting remains part of the fabric of popular music from the 20th century, capturing the sensibility of southern California and wrapping it in music that captivated listeners worldwide. In his work with Eagles, Frey achieved his most heartfelt desire: to be taken seriously as a songwriter and create songs that stood the test of time.

You can never leave: check out our best Eagles songs