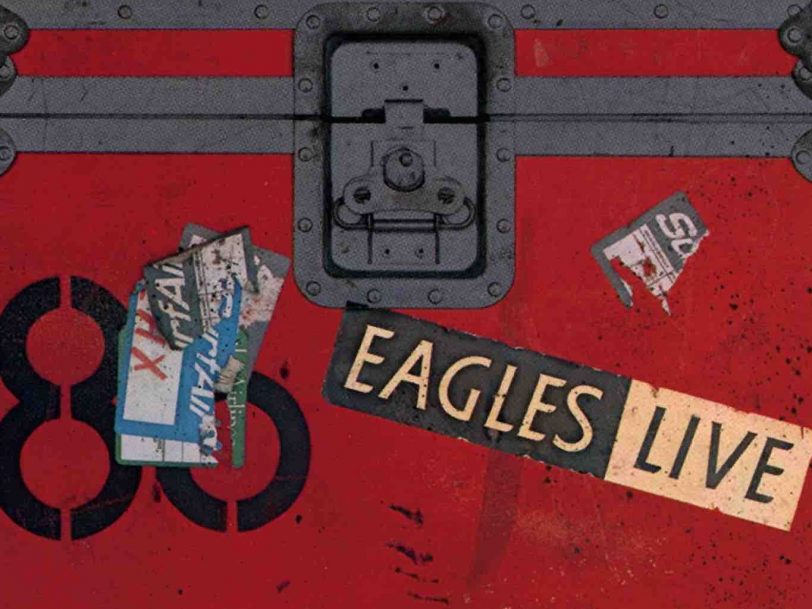 Some 14 months after releasing their US No.1 album The Long Run, Eagles released their first concert album, Eagles Live, a collection of 15 songs recorded from 1976 to 1980 at three California venues: The Forum in Inglewood, Santa Monica Civic Auditorium and Long Beach Arena.

The album, released by Asylum Records on 7 November 1980, consists of mostly faithful, skilled concert recreations of the studio versions of the group’s hits, including three songs – Heartache Tonight, I Can’t Tell You Why and The Long Run – from their recent The Long Run album.

Eagles were going through a difficult, fractious time when the album was in production, and there is a certain tense energy in some of the performances, especially the version of Life In The Fast Line, which was taken from a particularly confrontational show held in Long Beach on 31 July that year. Rhythm guitarist and singer Glenn Frey later admitted that Eagles were “tired” of each other at the time. Nevertheless, Eagles Live captures why they were one of the most popular bands of the era, along with the appeal of the superb musicianship of Don Felder (guitars, vocals), Don Henley (drums, percussion, vocals), Timothy B Schmit (bass guitar, vocals) and Joe Walsh (guitars, keyboards, vocals).

Because the double-album included music from shows dating back to 1976, the final selection featured five songs featuring the group’s original bass player, Randy Meisner, who had left Eagles in 1977. Meisner takes lead vocals on a heartfelt version of his own epic composition Take It To The Limit. He also plays on New Kid In Town, Wasted Time, Doolin’ Dalton (Reprise II) and the haunting Desperado.

Eagles Live also featured contributions from a host of guest musicians who performed with the band during the various shows. Among the most significant contributions are the alto saxophone playing of Phil Kenzie on The Long Run, JD Souther’s acoustic guitar work on New Kid In Town and the backing vocals of The Monstertones on All Night Long.

As well some of the best Eagles songs – among them Hotel California, Life’s Been Good, Saturday Night and Take It Easy – Eagles Live included one previously unreleased tune, a gorgeous a cappella cover of Steve Young’s Seven Bridges Road. The song, which the late Georgia-born country singer first released in 1969, was full of evocative imagery inspired in part by a rural thoroughfare that leads to Oakwood Annex Cemetery in Montgomery, Alabama, the final resting place of Hank Williams. The lyrics, about “moonlight and moss in the trees” and “time-sweetened honey”, had always been a favourite of the band. Felder once revealed that when Eagles first began playing large stadiums the musicians would warm up pre-concert by singing Seven Bridges Road in their locker room. When the group released their version of the outlaw country classic as the only single from Eagles Live, the song made a strong chart run, peaking at No.21 in the first week of February 1981.

The post-production of Eagles Live was a complicated affair, mainly because the group had all but broken up: Frey remained in Los Angeles and Henley was in Miami, meaning that the album’s master tapes had to be flown back and forth between the different coasts in order to complete the record.

A memorable entry among Eagles’ album covers, the artwork for Eagles Live hinted at what had become fractious internal relationships among the band: the record labels showed pictures of a bird’s nest filled with eggs and hand grenades, while the sleeve was designed in the image of a flight case used to transport equipment during a concert tour, with the letters “MIA” (for “missing in action”) printed on the rear in the style of air-freight stickers.

The artwork was designed by Kosh – a graphic artist from London who made his name designing for the Royal Ballet and Royal Opera House before becoming creative director of The Beatles’ 1969 album Abbey Road. The cover photograph was taken by Aaron Rapoport, perhaps best known for shooting the front image for Supertramp’s Breakfast In America album.

Eagles Live was well received by fans and reached No.6 on the Billboard 200 in the run-up to Christmas 1980, but it would also mark the last Eagles live shows until the group embarked on their Hell Freezes Over reunion tour in 1994.