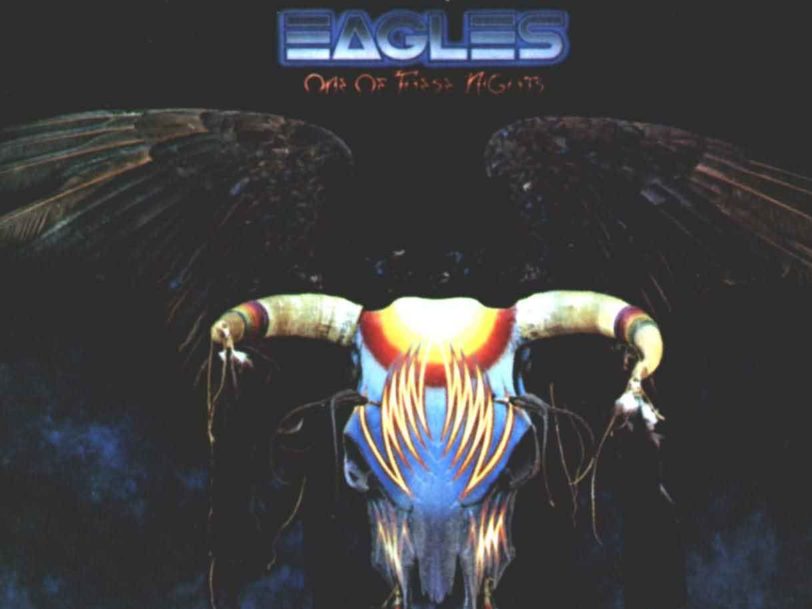 Eagles’ fourth album, One Of These Nights, sold four million copies and earned a Grammy nomination for Album Of The Year. “We wanted to get away from the ballad syndrome,” singer and drummer Don Henley said at the time. “With Don Felder in the band now, we can really rock. He’s made us nastier and did a great guitar solo on the single.”

Listen to One Of These Nights here.

“It is my favourite Eagles record”

The original band, formed in 1971, was comprised of Henley, Glenn Frey, Randy Meisner and Bernie Leadon, who left the band after the tour in support of One Of These Nights. Felder had been working with Eagles since January 1974, when he was brought in to play slide guitar as a session musician on that year’s On The Border, and was soon invited to join the band full time. He also sang lead vocals on One Of These Nights’ Visions.

Frey believed that the album’s title track, another hit he wrote with Henley, was “a breakthrough” that still stands among the best Eagles songs, because it moved the band towards a rock-based, edgier sound. Felder’s stirring guitar work, combined with Henley’s smooth vocals, which rise to a falsetto near the end of the song, earned Eagles another No.1 hit.

Frey and Henley also wrote the song Lyin’ Eyes, composed after they had been out one night in Los Angeles and began talking about the beautiful women they spotted cheating on their overweight, wealthy husbands. They came up with the title as they were drinking in Dan Tana’s, an Italian restaurant in West Hollywood, when Frey commented, “Look at her, she can’t even hide those lyin’ eyes!” The six-minute story-song became the band’s first crossover hit, reaching No.8 on the country charts, helped by Meisner’s acoustic guitar playing and Felder’s mandolin. It earned Eagles their first Grammy award for Best Pop Performance By A Duo Or Group With Vocals.

The third massive hit single from One Of These Nights – which was recorded for Asylum Records at Mack Emerman’s famous Criteria Studios in Miami and Record Plant in Los Angeles – was the catchy Take It To The Limit, featuring Meisner on lead vocals. Meisner recalled that he began composing what would turn out to be one of Eagles’ most beloved ballads, structured in waltz time, when he was at home on his own. “I was feeling kind of lonely and started singing, ‘All alone at the end of the evening/And the bright lights have faded to blue.’ And it went from there,” he recalled. He ended up completing the song with Henley and Frey.

Another well-known track from the album is Journey Of The Sorcerer, which was composed by Leadon, who played banjo on it. The instrumental number was later used as the theme music for the 1970’s BBC radio series The Hitchhiker’s Guide To The Galaxy, based on the book by Douglas Adams. The tune, which featured acclaimed fiddle player David Bromberg and the strings of The Royal Martian Orchestra, was reportedly chosen by Adams not only for its futuristic-sounding nature, but also for the fact that it had a banjo in it, which Adams said gave it an “on-the-road, hitchhiking feel”.

Among One Of These Nights’ nine tracks, which also include Too Many Hands and Hollywood Waltz, one of the most controversial songs was the closing I Wish You Peace, which was composed by Leaden and his then girlfriend Patti Davis, daughter of the right-wing California Governor Ronald Reagan, a future US President. Davis had been disowned by her mother, Nancy Reagan, for living with Leaden as an “unmarried couple”. In a later biography of Nancy, Kitty Kelley quoted Henley as saying Eagles were not proud of this piece of “smarmy cocktail music”.

Frey said they had been listening to a lot of R&B and soul music in the run-up to making One Of These Nights – including music by Al Green and The Spinners – and were influenced by the views of their producer, Bill Szymczyk. “Bill is a real R&B freak,” said Frey. “He was a freelance engineer in the 60s on Aaron Neville’s Tell It Like It Is and BB King’s The Thrill Is Gone.” The latter blues classic was firmly on their minds when Frey and Henley wrote After The Thrill is Gone, which explored what happened in the aftermath of that earlier song about lost love. “We know that the thrill is gone – so, now what?” Henley later explained.

The artwork for One Of These Nights is particularly striking, based on artwork by Boyd Elder, a painter whose work the band saw when it was exhibited in Venice, California. “I decided to focus on the front cover and create a magical talisman to represent and express the powerful dark magic of the band and the music,” recalled designer Gary Burden on his website. “I went to a friend, artist Boyd Elder. I wanted to use one of his pieces for the cover and have him do the lettering for me. I chose this particular piece of art because it represents, to me, where the band was coming from and where they were going. The cow skull is pure cowboy, folk, the decorations are American Indian-inspired, and the future is represented by the more polished reflective glass beaded surfaces covering the skull. All set against the dark eagle feather wings that speak of mysterious powers.”

Released on 10 June 1975, One Of These Nights stayed at the top of the album charts for nearly eight weeks and was described by Frey as “a quantum leap” for the band. The title track remains a classic. “It is my favourite Eagles record,” Frey asserted. “If I ever had to pick one, it wouldn’t be Hotel California, it wouldn’t be Take It Easy. For me, it would be One Of These Nights.”

Check out our best Eagles songs to find out which One Of These Nights tracks made the cut.