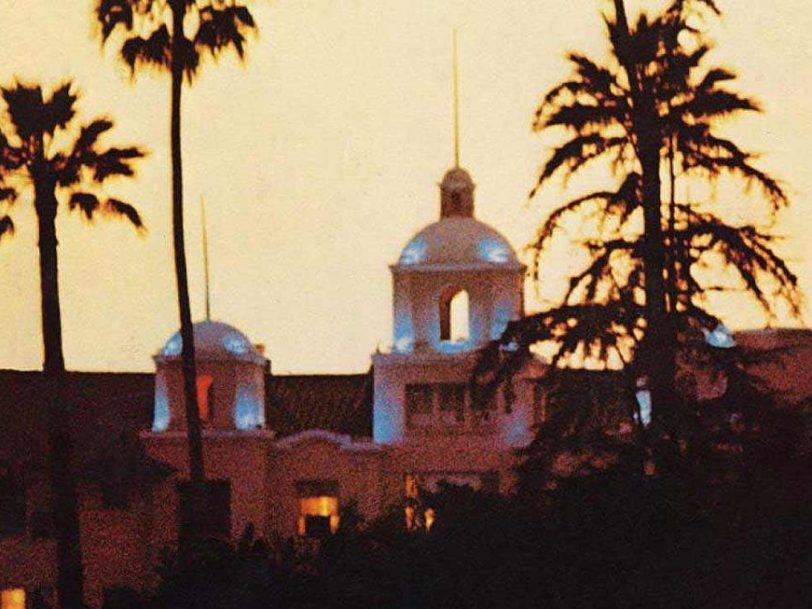 Not only is Hotel California one of Eagles’ best albums, its title track is one of the most acclaimed pop hits of the 20th century. The single was a collaborative effort, with credits shared between Don Felder (music), Don Henley and Glenn Frey (both for lyrics), and it won the Grammy for Record Of The Year.

Hotel California is one of five songs on the album on which Henley sings lead vocals. The Hotel California album also includes a punchy track called Life In The Fast Lane, about a doomed thrill-seeking jet-set couple, which features some energetic guitar from Joe Walsh and Glenn Frey’s impressive clavinet playing.

“A journey from innocence to experience”

Hotel California, Eagles’ fifth studio album, was released on 8 December 1976. It also earned the group a Grammy for Best Arrangement For Voices, for the elegant track New Kid In Town, which was written by Henley, Frey and JD Souther.

Randy Meisner, who played bass and the Mexican guitarrón on the album, sang lead vocals on his own composition, Try And Love Again. Walsh took on lead vocals on his own co-written track Pretty Maids All In A Row, which features some impressive string synthesiser work from Henley. The Last Resort, perhaps the angriest song written by Frey and Henley, is about the destruction of the environment and includes the line, “Some rich men came and raped the land/Nobody caught ’em.”

“One of the high points of my career”

The Hotel California album, which was recorded in Miami and Los Angeles, opens with the masterpiece title song. Its origins were in a melody Felder created at home, before he got together with Henley and Frey, who began to flesh out the words to a song Henley later described as being about “a journey from innocence to experience”. In its initial stages, the song was given the name Mexican Reggae, reflecting the reggae-styled guitar pulse, harmonised guitar interplay and pulsating Rototom drum fills that made up the bedrock sound.

Felder and Walsh worked painstakingly with producer Bill Szymczyk to perfect their epic, climactic guitar battle. “I will never ever forget that,” Szymczyk later told Classic Rock Revisited. “I had a two-day period of Don Felder being on my left and Joe Walsh on my right in the control room figuring out all of those guitar parts. It was put together piece by piece, bit by bit, and there was a lot of experimentation and a lot of trial and error. It took us two days just to do all of the guitars on the ending and it is one of the high points of my career.”

“We decided to create something strange”

Though Hotel California’s music is stunning, it gradually became clear that the memorable lyrics – about a world-weary traveller who is lured into a bizarre downbeat hotel – would ignite a lasting debate among music fans keen to debate their interpretation, even though Frey admitted they contained a deliberate ambiguity.

“We were Steely Dan fans. They were brave lyrically. We wanted to write a song that was like an episode of The Twilight Zone,” said Frey. “That was cinematic. The song follows different pictures. We decided to create something strange to see if we could do it.”

The lines “They stab it with their steely knives/But they just can’t kill the beast” is a playful reference to Steely Dan, while “You can check out any time you like/But you can never leave” led some fans to speculate that the Los Angeles hotel was actually a metaphor for a psychiatric asylum.

“The dark underbelly of the American Dream”

Henley said that the six-and-a-half-minute song, which features references to mirrors on the ceiling and pink champagne on ice, was “basically a song about the dark underbelly of the American Dream and about excess in America”. It shot to No.1 on the Billboard charts and was quickly certified gold for selling one million copies in under three months.

Though Hotel California’s focal point, the “lovely place”, is not based on any particular hotel, the building photographed by David Alexander which appears on the cover of the album is the Beverly Hills Hotel. Eagles used the image without permission, but the hotel had no desire to take the band to court because the success of the single and album led to a surge in bookings. The image is now one of the most iconic album covers of the 70s.

The Hotel California album is more than just the main hit, of course, and includes the sweet, slower-tempo Victim Of Love and the haunting five-minute ballad Wasted Time, which is one of Eagles’ most mournful songs. Written after Don Henley’s bitter breakup with Loree Rodkin, it features one of his best vocal performances, set against soaring strings. The band also cut an instrumental version of Wasted Time, which opens the second half of the record.

Hotel California has sold more than 32 million copies worldwide in the past half century, and it remains one of the band’s crowning achievements.

Check out our 20 best Eagles songs