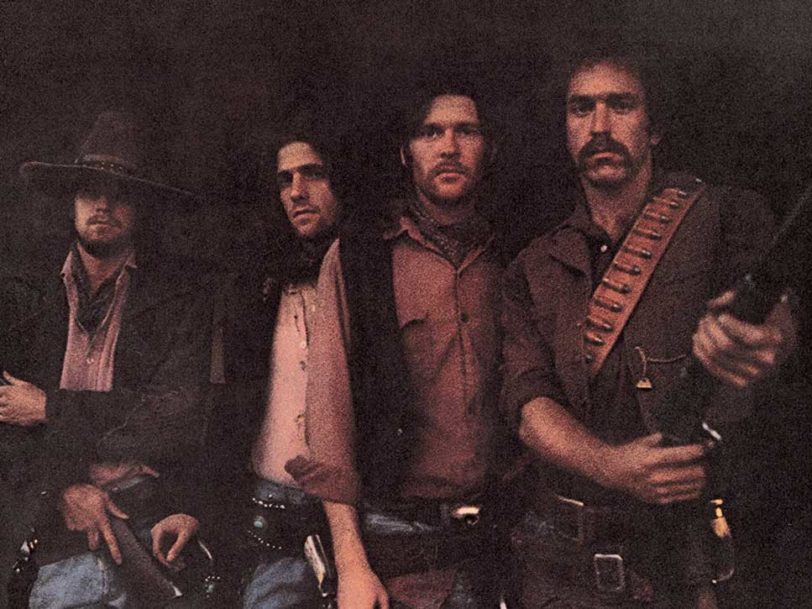 Jackson Browne remembered that when he was living with Glenn Frey and JD Souther in a cheap apartment block in Echo Park, Los Angeles, in the early 70s, they would all leaf through a 50s coffee-table book called The Album Of Gunfighters, by J Marvin Hunter and Noah H Rose. The book contained photographs and stories about Wild West legends such as Jesse James, Billy The Kid and The Dalton Gang, a band of train robbers from the early 1890s. Frey said it inspired them to think of an album which “draws some parallels between rock’n’roll and being an outlaw”, and the result was Desperado, one of Eagles’ best albums, which was released on 17 April 1973.

“We were taken with the idea of being outlaws”

One of the many idiosyncrasies about an album based on the myths of the Old West was that it was recorded during a cold February in London, at Island Records’ studio in Basing Street, Notting Hill, where the four main musicians (singer and guitarist Frey, drummer and singer Don Henley, guitarist and singer Bernie Leadon and bassist and singer Randy Meisner) were under the direction of producer Glyn Johns, who had also worked on the group’s 1972 eponymous debut album. The band stayed on the King’s Road, and with Johns and his family in Epsom, sometimes exploring the Surrey countryside in the producer’s expensive Lincoln Continental. “We all loved being in England,” said Leadon.

Desperado opens with Doolin-Dalton, co-written by Frey, Henley, Souther and Browne, which tells the story of how 23-year-old Bob Dalton met his bloody end during a gun fight in Coffeyville, Kansas, in 1892. Johns also inserted a 48-second instrumental version of Doolin-Dalton that featured Leaden’s deft banjo and mandolin playing. “We were quite taken with the idea of being, or at least portraying, outlaws,” Souther said, in 2014. “It was a serviceable metaphor for our story.”

The album features a variety of styles of music, from the bluegrass-leaning Twenty-One, a song about youthful bravado written by Leadon, to the hard-rocking Out Of Control, which Frey and Henley wrote along with the late Eagles tour manager Tom Nixon.

One of Desperado’s highlights – and, indeed, one of the best Eagles songs[https://www.thisisdig.com/feature/best-eagles-songs/] of all time – was Tequila Sunrise, about a cocktail drink that was hugely popular at the time. Henley said that he and Frey used to call a swig of the drink “a shot of courage”, because it gave them the nerve to talk to women in bars, back in the days when they were young aspiring stars. Frey came up with the song’s distinctive guitar riff, which he described as “kinda Roy Orbison, kinda Mexican”.

“I was scared stiff”

The key song on the album was Desperado itself, a moving ballad written by Henley and Frey that was, according to Browne, “really the seed of the whole thing”. The poignant lyrics (“Desperado, oh, you ain’t getting’ no younger/Your pain and your hunger, they’re drivin’ you home”), mournful vocals from Henley and the sweeping string arrangements that featured the London Philharmonic Orchestra, provided the perfect mix for a classic song.

Though the strings were a triumph – a production flourish conducted by Jim Ed Norman – Henley had some quirky memories of the recording during a “freezing” day in London. “I sang the lead vocal to Desperado live in a huge studio with the London Philharmonic, several of them being crotchety old farts who were pissed off because they were required to play some whole notes,” he told Rolling Stone in 2016. “Some of the violinists had actually brought chessboards with them, set them up between their chairs, and were playing chess between takes. Let’s just say that they were not enamoured with the lore of the American West, at least not in the form of pop balladry. They were bored shitless, and I was scared stiff. I had never sung in front of a large orchestra before, and I was only given about four or five takes to get it right.”

The only cover song on the album was a version of Outlaw by Greenwich Village folk singer David Blue, which showcased the slick vocal harmonising of the band. That song, and Leadon’s Bitter Creek – based on the exploits of Dalton gang member George Newcomb – captured the Old West atmosphere the band wanted. Meisner, part of a multi-talented band, took lead vocals on Certain Kind Of Fool, a song that delved into the psychology of a wild youngster. Meisner also co-wrote the sweet ballad Saturday Night.

“Desperado gave the Eagles an identity”

Desperado’s striking artwork was in keeping with the cowboy theme. Artist Gard Burden drew the band as outlaws for the front cover, and photographer Henry Diltz created a re-enactment of the capture of The Dalton Gang for the back image. The photograph shows all four Eagles, along with Browne and Souther, posing dead and bound on the ground, as a posse stands over them. The posse included producer Johns (wearing a white hat), manager John Hartmann, road manager Nixon, artists Burden and Boyd Elder, and some roadies. The photo-shoot took place at the Paramount Ranch, once a film set for westerns.

The concept album took time to be accepted commercially, with Eagles manager Ron Stone calling it “ambitious” and a “leap creatively”, but it went on to achieve critical acclaim and eventually be certified double-platinum – just reward for an excellent country-rock album full of gorgeous harmonies, fine production, interesting lyrics and impeccable musicianship.

“Desperado was a brilliant move, because it gave the Eagles an identity,” Browne later told Uncut. “There was something limited about the concept, but it was also very potent.”

Find out which Desperado song made the cut for our best Eagles songs.