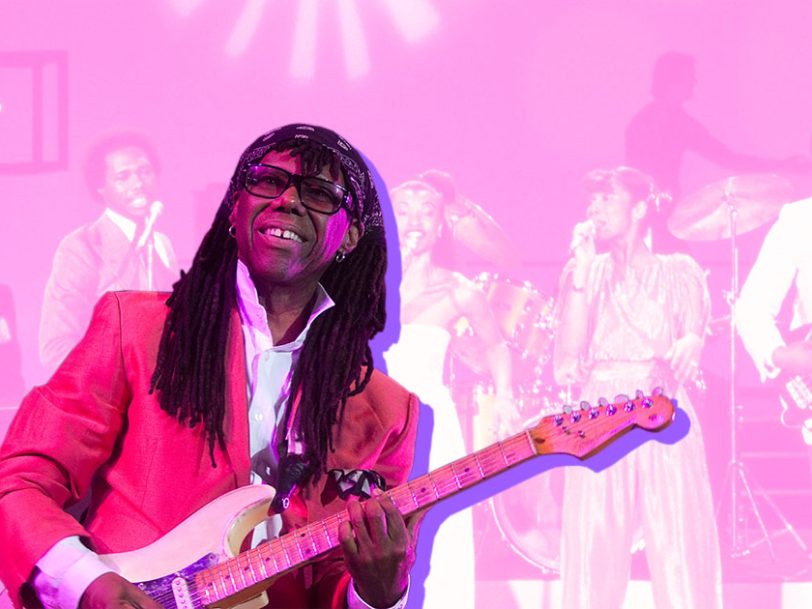 In the early 70s, while disco music was still in its infancy, the New York City-based R&B/funk outfit Chic instinctively knew that it was missing a key ingredient. Aiming to make the disco sound more soulful and funky, the punchy bass-and-guitar combo of Bernard Edwards and Nile Rodgers added a new dimension which caused a tectonic shift in pop music that continues to be felt today. Thanks to classic hits such as Le Freak and Good Times, Chic raised the bar for disco and took it well beyond its LGBTQ+ club origins. “People wanted a place where everyone could be equal, and discos provided that,” Rodgers later observed. Placing themselves in the eye of the storm, Nile Rodgers’ funky guitar licks and Bernie Edwards’ virtuoso bass grooves elevated Chic to disco superstardom.

“We didn’t want to be a small band. So we got into disco”

Formed in 1976, Chic were anchored by Edwards and Rodgers, a dream pairing born out of New York City’s R&B touring circuit. “We didn’t want to be a small band playing bar mitzvahs the rest of our lives,” Rodgers told The Washington Post in 1978. “So we got into disco.” While Rodgers had a love of Jimi Hendrix’s sonic innovations and a fondness for jazzy tonalities, Edwards was a hard-nosed R&B veteran, schooled in the grooves of Motown and foot-tapping soul songs. Together, they set out to use disco as a vessel for their funk-laden ingenuity.

Released in September 1977, Chic’s debut single, Dance, Dance, Dance (Yowzah, Yowzah, Yowzah), sold a million copies in under one month and peaked at No.6 in the US, quickly becoming the biggest hit of the summer. With Chic’s self-titled debut album resonating with both the “buppies” (Black Urban Professionals) and the hedonistic club-goers, Rodgers and Edwards set themselves apart by wearing suave suits, positively glowing with sophistication as they fashioned their cool R&B rhythms and kinetic funk breakdowns. Instant favourites with disco DJs, Chic’s music helped soundtrack the nightly escapism of fun-loving city-dwellers who frequented gay clubs such as Paradise Garage and bohemian venues such as The Night Owl.

Chic’s rapid ascension to fame in the late 70s was remarkably well-timed. In New York City alone, 250,000 bodies passed through nightclub doors each year, and, at the close of the decade, there were over 200,000 disco venues across the country. Issued in March 1978, Chic’s second single, Everybody Dance, saw the group strike another thunderbolt through the disco movement, yet Nile Rodgers denied that Chic were a purely disco outfit, arguing in interviews that there was more to their music than that. And quite right, too. As David Bowie, who would later enlist Rodgers to produce his smash-hit Let’s Dance album, put it: “I was aware of Chic from day one. I loved the original Chic tracks, from Dance, Dance, Dance onwards.” By catching the ear of the musical cognoscenti in such a way, it was clear that Rodgers and Edwards had captured lightning in a bottle.

“We called it DHM, or Deep Hidden Meaning”

Inspired as much by art rock and rock’n’roll as they were by advances in 60s and 70s Black music, Chic honed a style designed to, in Rodgers’ words, “mesh KISS’s anonymity with Roxy Music’s musical diversity and sexy cover-girl imagery”. It was Rodgers’ idea to imbue their innate gift for penning disco floor-fillers with a multi-layered lyrical density. “We developed a new sound that was a fusion of jazz, soul and funk grooves with melodies and lyrics that were more European influenced,” he later said.

Nowhere was this more apparent than in Rodgers’ shrewd sneaking of social and political messages into Chic’s songs. “We called it DHM, or Deep Hidden Meaning,” he explained. “Our golden rule was all our songs had to have this ingredient. In short it meant understanding the song’s DNA and seeing it from many angles.” For example, the group’s second US chart-topper, Good Times, could be seen as a surface-level dance song about escaping a humdrum existence, but its references to 30s dance crazes were intended as a social commentary on the economic downturn of the late 70s – the worst recession at the time since the Wall Street Crash.

“At that time in America, everything was just funk”

Among their disco contemporaries, Chic stood out from the pack. “At that time in America, everything was just funk,” Rodgers reflected, commenting on how Chic had only ever set out to put an interesting spin on R&B. Sure enough, thanks to US Hot 100 hits such as Dance, Dance, Dance (Yowzah, Yowzah, Yowzah) and Everybody Dance, Chic were on regular rotation in New York’s most famous disco hotspot, Studio 54. Their love of anonymity did them no favours, however, as Rodgers and Edwards were once barred from entering the club, thanks to its notoriously strict door policy.

Seething at the way Studio 54 co-founder Steve Rubell allowed disco’s biggest stars to be treated, the pair headed back to the recording studio and began writing what would become their seminal hit, Le Freak. Funnelling their rage into a potty-mouthed dig at the club – the chorus was originally “Aaaaaaah, fuck off!” – Rodgers and Edwards eventually altered the lyrics to instead reference a hot new dance. “I just knew there was this dance around called The Freak,” Edwards said in 1979. “There’s even an underground freak where people take their clothing off! That’s how it happened.”

Rodgers has also pointed out how Le Freak could be about “freaking out” after a bad LSD trip. It was DHM in action. Selling six million copies in the US alone, Le Freak marked the height of disco’s imperial phase. One of the best Chic songs of all time, its insatiable mix of danceable funk finesse and luscious strings helped the track became the group’s biggest-selling single.

“When a band has something really unique and special, you can change the world”

As disco declined in popularity, however, Chic’s commercial fortunes waned. They’d seen out the decade with two more stone-cold classics, I Want Your Love and Good Times, but in the early 80s, it was New Romantic synth-pop acts such as Duran Duran and Spandau Ballet who were most in thrall to the Chic sound, folding it into their own concoction of new-wave pop. The group went on hiatus in 1983 and, though they returned for subsequent albums in the late 80s and early 90s, the death of bassist Bernard Edwards in 1996, at the age of 43, seemingly put Chic on ice for good. Speaking of missing him “as a spirit, and as a friend, and as a buddy who looked out for me”, Nile Rodgers told BBC HARDtalk in 2015 that continuing was difficult because “even though I may have composed most of the bulk of the compositions, Bernard was clearly the band leader, and that was his role.” It was the end of an era.

However, time has proven that Chic transcended the disco genre altogether, particularly given how many hip-hop and dance acts have gone on to sample their music. Away from his famous group, the best Nile Rodgers songs include songwriting and production work with everyone from Madonna (Like A Virgin) to David Bowie (Let’s Dance), Diana Ross (Upside Down) and Duran Duran (The Reflex). And, in the shape of Sister Sledge’s We Are Family, he also helmed one of the best LGBTQ+ songs of all time. Having long established himself as one of the most influential Black musicians of his generation, there was no bigger reminder of Chic’s legacy than when, in 2013, Rodgers teamed up with French DJs Daft Punk to release the single Get Lucky, a No.1 smash hit across the world.

Though not a Chic song, Get Lucky contained all the familiar ingredients, from chattering riffs to floor-thumping bass, proving that Chic truly stand among the most influential musicians of all time. This resurgence led Rodgers to release Chic’s 2018 comeback album, It’s About Time, on which he sampled the late Bernard Edwards’ outtakes in acknowledgement of how integral the deceased bass player was to the group’s DNA. “When a band has something really unique and special,” Rodgers said, “you can change the world.” Through reshaping disco in their own image and going on to influence the sound of contemporary pop, rap and dance music, it’s obvious that Chic have done exactly that.

Find out where Nile Rodgers ranks among the most influential Black musicians in history.