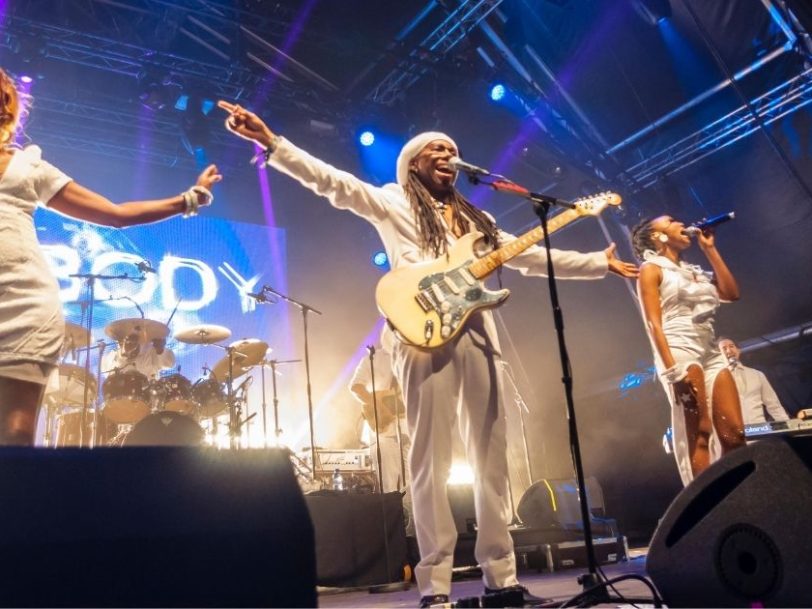 Boasting one of the most-sampled hooks in history, Chic’s funky disco song Good Times made waves and kick-started the art of sampling.

By 1979, disco group Chic had long proven themselves adept at lighting up dancefloors with funky hits such as the US No.1 Le Freak and the amorous thrust of I Want Your Love. Fronted by guitar maestro Nile Rodgers and rubber-fingered bassist Bernard Edwards, the band had already sold millions of records worldwide by the time they released their signature song, Good Times, that summer. Winning even more plaudits from critics and musical contemporaries for their phenomenal mix of swinging R&B and ever-winding funk grooves, the song would go on to become a cornerstone in the development of hip-hop. This is the story of how that came to pass…

“The bassline never worked, until we did Good Times”

As the lead single from their third album, Risqué, Good Times was not only one of the best Chic songs yet, but a pop-culture milestone that could easily be regarded as one of the most influential singles of all time. Released on 4 June 1979, the song was an instant party anthem that topped the charts and inspired countless imitators, from outspoken UK punk-rockers to Bronx-based MCs emerging from New York’s early hip-hop scene.

Nile Rodgers later recalled meeting up with engineer Bob Clearmountain at the New York City recording studio The Power Station, in downtown Manhattan, where the song came together remarkably quickly. “I wrote Good Times the morning we recorded it,” the guitarist told Uncut magazine, recalling how bassist Bernard Edwards turned up late “like a puppy dog with his tail between his legs”.

Having mapped out the arrangement to perfection, there was still scope for Edwards to lay down the song’s iconic bass riff. One of the best 70s basslines, the immediately recognisable hook had been bubbling away ever since the duo magicked it out of thin air during their time together as The Big Apple Band in the early 70s. “We had tried it and tried it and it never worked, until we did Good Times,” Rodgers later told the UK’s Official Charts Company. Now, however, they found it meshed perfectly with their new song’s joyous sense of uplift.

Chic’s female singers Alfa Anderson, Luci Martin, Michelle Cobbs and Ullanda McCullough took centre-stage on Good Times, punctuating the song’s upbeat bass groove with ecstatically percussive vocal exhortations (“Good times/These are the good times/Leave your cares behind”). However, Anderson also gives credit to the input of male singer Fonzi Thornton, who sang at the top of his range to blend in with the girls’ voices.

“Fonzi and Michelle came in and brought in a new and different energy to the sessions,” she told Record Collector magazine. Calling it “simply the most infectious bassline balanced with the most perfect guitar licks that I had heard”, Anderson knew Good Times was destined to be a smash, especially when the string section lifted it into the cosmos in a way which would leave even the most discerning listeners starry-eyed.

Upon its release, Good Times went gold and sold more than five million copies, peaking at No.1 in the US and becoming the best-selling singe in the history of Atlantic Records. But while, on the surface of it, Good Times seemed to be a simple ode to dancing the night away, Nile Rodgers was always fond of weaving what he calls “DHM” (deep hidden meanings) into Chic’s songs – and Good Times was no exception.

“Every lyric in the song was a throwback to Depression-era songs,” the guitarist has admitted. “We were talking to people in a time of financial chaos and putting a bright face on it.” The late 70s were, after all, a time of economic recession – the worst the US had seen since the Wall Street Crash – so Rodgers felt compelled to make Good Times a vaguely satirical comment on partying amid the rubble of plummeting share prices – that’s why the lyrics contained nods to Al Jolson’s Happy Days Are Here Again! and 30s dance fads, smartly juxtaposing the song’s disco-fied party vibes with Depression-era cultural references in order to underscore the irony of history repeating itself (“Let’s cut a rug, a little jive and jitterbug”).

Despite the single’s undeniable chart success, disco was suffering a public backlash in 1979. Just a month after Good Times was released, Chicago “shock jock” Steve Dahl ran a Major League Baseball-sponsored “Disco Demolition Night” at Comiskey Park in July, where at least 10,000 people caused a riot, chanting “disco sucks” and burning thousands of disco records on a bonfire. Out of the ashes of the genre’s declining popularity, however, Good Times emerged like a phoenix from the flames…

“If you combine the sales of Good Times and Rapper’s Delight, you have the biggest-selling single of all time”

Clearly not sharing such antipathy, the early hip-hop pioneers who held block parties in the Bronx district of New York regularly span a slew of disco cuts as they held fort over a pair of turntables. Pioneering rap trio The Sugarhill Gang adopted Good Times from the get-go, interpolating its irresistible bassline into their debut single, Rapper’s Delight. Released in September 1979, the song saw “Big Bank Hank” Jackson, Guy “Master Gee” O’Brien and “Wonder Mike” Wright rap over Chic’s groove with radio-friendly finesse (“To the bang-bang boogie, say up jump the boogie/To the rhythm of the boogie, the beat”).

The first rap song to break through to the commercial mainstream, Rapper’s Delight was a truly historic release that sold more than 14 million copies and brought Chic’s genius to a burgeoning hip-hop crowd. Initially, however, Nile Rodgers and Bernard Edwards were dismayed not to be credited on the song, and they went about pursuing legal action. “You might be able to ‘sample’ a piece of candy,” Rodgers wrote in his memoir, Le Freak: An Upside Down Story Of Family, Disco And Destiny, “but we weren’t ready to let someone else get all the cash from dining off of something we’d built from scratch.” Rodgers and Edwards were subsequently granted songwriting credits, and the role Chic played in the rise of hip-hop is now part of their enduring legacy.

“If you combine the sales of the single Good Times and Rapper’s Delight, you have the biggest-selling single of all time,” Nile Rodgers later reflected, and to this day the guitarist freely acknowledges the cultural importance of both songs by performing Rapper’s Delight as part of a medley with Good Times during live performances. It’s worth pointing out, however, that Good Times’ influence went beyond hip-hop: not only did the song inspire Queen’s take on funk-rock with their 1980 single Another One Bites the Dust, but you can also hear shades of it on Rapture, released by new-wave pop icons Blondie early the following year, and on British punk band The Clash’s 1981 flirtation with rap-rock, This Is Radio Clash.

Good Times may well have started life as disco’s last gasp, but the sheer musical ingenuity of Bernard Edwards’ bass-playing and Nile Rodgers’ impeccable guitar skills have transcended genre divides. Creating new audiences well beyond the disco-loving clientele that frequented the fabled New York nightclub Studio 54, the song ushered in decades’ worth of musical innovation, forever cementing Chic’s place among the most influential musicians of all time.

Find out where Good Times ranks among our best Chic songs.