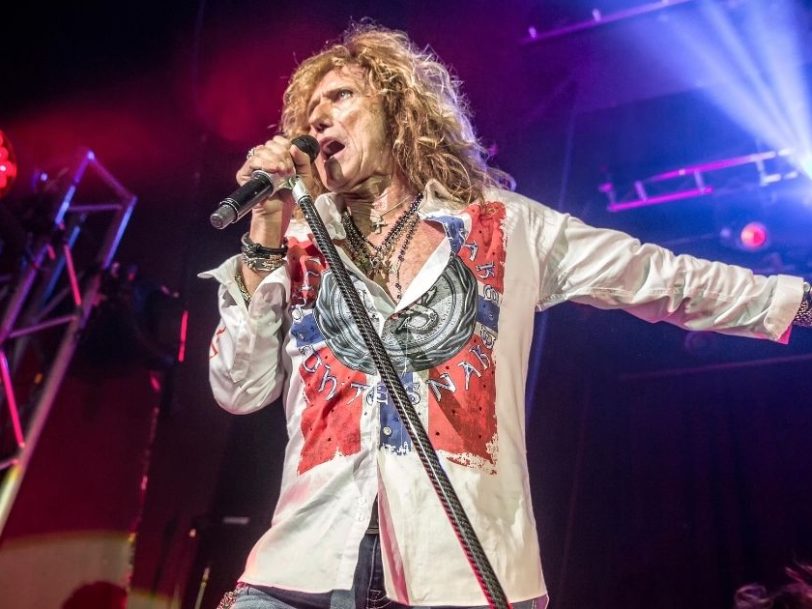 Long on muscle, with an underlying love of the blues, the best Whitesnake songs prove why David Coverdale remains of rock’s greatest singers.

Formed by the charismatic ex-Deep Purple frontman David Coverdale in 1978, Whitesnake have been synonymous with the best in hard rock music ever since. Scoring substantial early success in the UK and Europe with albums such as Come An’ Get It and Saints & Sinners, they later broke the US and became one of the world’s biggest bands during the latter half of the 80s. They group have endured ever since, and show no sign of letting up in their fifth decade. In tribute to these stalwart rockers, we pick the 20 best Whitesnake songs – essential cuts which reveal that even serpents shine.

Even in the rather less PC-inclined late 70s, Whitesnake’s second album, Lovehunter, attracted controversy thanks to its cover art, which featured a painting of a naked woman straddling a large snake, as depicted by fantasy artist Chris Achilleos. However, this none-more-Spinal Tap sleeve actually housed a fine record, crafted by the band’s original, blues-inclined incarnation. Co-written by frontman David Coverdale along with guitarists Bernie Marsden and Micky Moody, Lovehunter’s funky, Led Zeppelin-esque title track was further enhanced by Moody’s suitably fork-tongued slide-guitar embellishments.

Lovehunter stalked its way into the UK Top 30, but Whitesnake’s third album, Ready An’ Willing, provided a more substantial commercial breakthrough for the band, peaking at No.6 and spawning a spin-off hit in the excellent Fool For Your Loving. Highly consistent throughout, Ready An’ Willing featured plenty of contenders among the best Whitesnake songs, with Coverdale in commanding vocal form and his band stretching out in fine style on the record’s terrific, groove-laden title track.

Allowing for a couple of personnel changes, Whitesnake’s initial line-up was relatively stable from the band’s inception, in 1978, through to their fifth album, 1982’s Saints & Sinners. Not for the last time, however, the group then underwent a major upheaval, with most of the original line-up departing during the making of their sixth album, Slide It In, and David Coverdale drafting in new recruits, among them drummer Cozy Powell and guitarist Mel Galley.

Further controversy ensued when the band’s US label, Geffen, insisted that Coverdale remix – and partly re-record – the album for the North American market. Yet, despite the turmoil, Slide It In paid dividends for the band, peaking in the UK Top 10 and spawning the breakthrough US hits Love Ain’t No Stranger and Slow An’ Easy. Undoubtedly one of the record’s highlights, the anthemic latter song also offered Coverdale’s newly recruited guitar wunderkind, John Sykes, the opportunity to add further firepower, stamping his identity on the new-look band.

David Coverdale originally conceived Restless Heart as a solo album, but after pressure from his label, he released it as Whitesnake’s long-awaited follow-up to 1989’s Slip Of The Tongue. The group’s only full-length studio album to feature guitarist Adrian Vandenburg, Restless Heart has become a staunch fan favourite, and it heralded a return to Coverdale’s blues-rock roots after the glam-metal stylings of Whitesnake’s self-titled 1987 album and 1989’s Slip Of The Tongue. One of its obvious standouts, the slow-burning Too Many Tears, reflected the singer’s love of Stax Records and Southern soul in general, and while it’s not typical of their output, it’s right up there with the best Whitesnake songs.

A full decade elapsed between the release of Restless Heart and the arrival of Whitesnake’s first 21st-century album, Good To Be Bad. However, the band’s supporters were repaid for their patience with a highly consistent record which Record Collector magazine astutely declared to be a “celebration of 30 years of the Snake and a fine salute, running to 11 quality cuts of melodic hard rock”. Arguably its highlight, the steely Best Years allowed Whitesnake to demonstrate they were still one of the leanest, meanest beasts lurking in rock’s ever-congested jungle.

Whitesnake captured a more than decent studio take of Walking In The Shadow Of The Blues for 1979’s Lovehunter, but the song really came into its own on stage. A staple of the original line-up’s live set, it was always performed with depth and feeling, but the version gracing the self-explanatory Live… In The Heart Of The City was especially dynamic – the whole band clearly relishing every second as they rode the song’s monster groove.

Whitesnake’s fifth album, Saints & Sinners, was recorded during a time of intensive stress, with all manner of personal tensions and business-related hassles causing the band’s original line-up to disintegrate shortly after it was completed. To their credit, Coverdale’s team refused to let their squabbles negate their art, and they presented a united front for an album which arguably remains their most consistent. Saints & Sinners included the original versions of future hits Crying In The Rain and Here I Go Again, but its rip-roaring opening cut, Young Blood, also demands inclusion among the best Whitesnake songs.

Whitesnake’s self-titled seventh album boasted a hard-edged glam-metal sound that proved contentious with some long-term fans, but it won the band a whole new audience in the US, where it went multi-platinum and skyrocketed the group to stardom. The record’s success was bolstered by its string of mega-selling singles, all of which enjoyed heavy rotation on the all-important MTV. The fire was lit by the record’s first single, Still Of The Night: a dynamic, Led Zeppelin-esque power rocker tempered by a neo-orchestral middle section which also rewarded the band with a UK Top 20.

Improving on the chart performance of its predecessor, Ready An’ Willing, Whitesnake’s fourth album, Come An’ Get It, went to No.2 at home, and it remains their highest-charting record in the UK. Indeed, it wasn’t only the original line-up’s best-seller, but it was only kept off the top spot by Adam And The Ants’ all-conquering Kings Of The Wild Frontier. Ready An’ Willing’s enduring hits, Would I Lie To You and Don’t Break My Heart Again, largely receive the plaudits, but the dynamic Child Of Babylon is equally deserving of a place among the best Whitesnake songs.

Recorded at the height of Whitesnake’s glam-metal pomp during the late 80s, Whitesnake’s eighth album, Slip Of The Tongue, was brash, arena-friendly and further embellished by guitarist Steve Vai’s suitably flamboyant lead playing. Its portentous highlight, Judgement Day, was as epic as they come in any era, and it inspired one of David Coverdale’s most impassioned vocal performances.

After leading the group through their highly successful glam-metal phase, David Coverdale wanted to return to Whitesnake’s earthier early sound, which he described as a combination of “blues, rock, soul, hooks and melody”. Certainly, the resulting Restless Heart was a lot closer in spirit to initial triumphs such as Ready An’ Willing, with the album’s compelling title track putting a contemporary spin on Coverdale’s original concept for his band.

It was outperformed on the charts by the likes of Here I Go Again and Is This Love, but there’s a credible argument to be made for Love Ain’t No Stranger as the most necessary song Whitesnake ever recorded. Co-written by David Coverdale and guitarist Mel Galley, this epic power ballad wasn’t just one of the best Whitesnake songs, it was the track that helped the band become an omnipresent feature on the Billboard Hot 100 in the mid-80s, its cause helped by the first in a series of memorably glossy MTV-friendly videos from the group.

Another truly epic power ballad, Is This Love was initially penned by David Coverdale and guitarist John Sykes with Tina Turner in mind, though it eventually emerged as a Whitesnake song and did brisk business: shooting to No.2 in the US, it was only denied the top spot by George Michael’s Faith. Always recalled for its resplendent MTV-friendly video featuring Coverdale’s then girlfriend (and future wife) Tawny Kitaen, Is This Love remains a mainstay of the band’s live set and has long since cemented its place among the best Whitesnake songs.

Inspired by the breakdown of David Coverdale’s first marriage, the defiant Don’t Break My Heart Again was co-written by the singer with guitarist Bernie Marsden, whose compact yet expressive guitar solo was captured on the very first take. Lean, hungry and powerful, this strutting, mid-paced rocker came straight from the heart and rewarded Whitesnake with their second UK Top 20 hit.

The second single plucked from Whitesnake’s ninth album, Restless Heart, Don’t Fade Away curiously failed to chart, despite the fact that it’s one of its parent album’s obvious standouts. More resigned and sorrowful than the band’s widely lauded power ballads such as Is This Love and Love Ain’t No Stranger, the song is a quality widescreen anthem on its own terms, and it’s more than worthy of reappraisal.

Crying In The Rain was later given an animated glam-metal makeover for 1987’s Whitesnake, but in retrospect, it’s fair to say the band had already cut the definitive version on Saints & Sinners. In its original guise, with the group slowly ramping up the tension and affording Coverdale all the room he needs for one of his most imperious vocal performances, the song is a tour de force and, quite simply, Whitesnake’s best-ever heavy blues number.

Slide It In’s lead single, Guilty Of Love, was only a minor hit in the UK, but it’s an absolute belter. First performed live at Monsters Of Rock at Castle Donington in 1983, this pacy, shape-throwing rocker has always been a sure-fire winner live, and its duelling, Thin Lizzy-esque guitars and storming chorus secure its high-ranking position among the best Whitesnake songs.

Though it went Top 40 in the UK, Come An’ Get It’s second single, Would I Lie To You, didn’t gain the traction of Whitesnake’s previous hit, Don’t Break My Heart Again. Nonetheless, it’s as tight, infectious and downright bad-ass as blues-rock gets, and it represents Whitesnake’s initial line-up at the absolute peak of their powers.

Fool For Your Loving was given the full, synth-led kitchen-sink treatment when it was overhauled for 1989’s Slip of The Tongue, but while the remake cracked the US Top 40, its original incarnation became Whitesnake’s first substantial UK Top 20 hit, in 1980. Co-written by Coverdale, Micky Moody and Bernie Marsden with BB King in mind, Whitesnake’s initial take of Fool For Your Loving had everything a great hard rock song needs – impassioned vocal, slinky groove, quicksilver solo and a killer chorus – and it still smokes today.

Yet another classic Whitesnake track inviting “before and after” comparison after the band switched labels and concentrated on the US market, Here I Go Again was originally a minor hit circa Saints & Sinners, but this MTV-friendly makeover turned the group into one of the world’s biggest rock bands in 1987.

It’s hard to pick the definitive version of the song. Featuring Jon Lord’s church-like organ, the original cut has plenty of power and panache, but the full-on Guns N’ Roses-esque update arguably just shades it. Whichever version you prefer, the grandstanding Here I Go Again remains forever synonymous with David Coverdale, and it easily tops our list of the 20 Best Whitesnake songs.