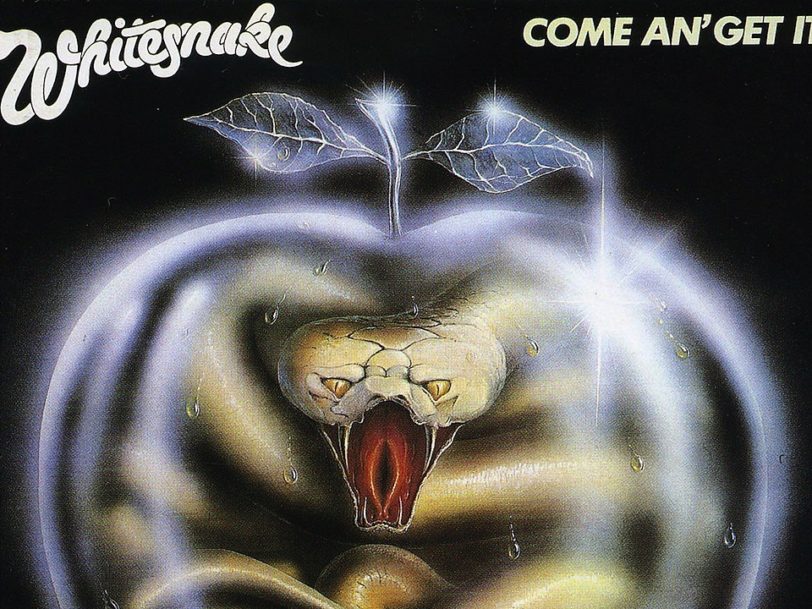 Whitesnake may have initially been put together as the backing band for vocalist David Coverdale, a former member of Deep Purple, but they quickly became a force in their own right. After establishing themselves as blues-rock contenders with a pair of late-70s records, Trouble (1978) and Lovehunter (1979), the group adapted their sound for the 80s, embarking on a run of albums that turned them into hard-rock heroes with commercial rewards to boot. Released in April 1981, Whitesnake’s fourth album, Come An’ Get It, was an invitation the rock-loving public couldn’t refuse.

Listen to Come An’ Get It here.

“A real stroke of genius”

The name “White Snake” was first used in 1977 as the title of David Coverdale’s debut solo album. By the time the band that took the record’s name gathered to record Come An’ Get It, however, guitarist Micky Moody was the only musician to have survived from those sessions. Guitarist Bernie Marsden, bassist Neil Murray and former Deep Purple keyboardist Jon Lord had joined in 1978, with Ian Paice, another former Purps alumni, taking over from drummer Dave Dowle the following year. It was this line-up that had recorded 1980’s Ready An’ Willing, whose debut single, Fool For Your Loving, gave the group their first taste of success, helping the album to hit No.6 in the UK while also taking Whitesnake into Top 100 US album and singles charts for the first time.

A mere four days after wrapping up their tour in support of the record, the band entered Ringo Starr’s Startling Studios, in Tittenhurst Park, Ascot, the former home of John Lennon and Yoko Ono, to record its follow-up with producer Martin Birch (Fleetwood Mac), Black Sabbath, Blue Öyster Cult, Iron Maiden). Speaking to GQ magazine in 2019, guitarist Marsden recalled the sessions for Come An’ Get It: “The studio itself at Tittenhurst was not very large” – a situation that forced Paice to set his kit up in the corridor outside. Doing so, however, “became vital for the entire album, as the high ceiling created a sublime sound. It turned out to be a real stroke of genius.”

With the rest of the band in the studio, Marsden continued, “There was a very cosy atmosphere and it was easy to get to work. Martin [Birch] immediately began weaving his magic spells, with Martin Adam, the house engineer, as his assistant. I have no idea how much Tittenhurst cost Whitesnake (I’m not sure any of us ever knew what anything really cost), but whatever it was, it was worth it.”

With the group taking breaks to play football outside, the relaxed atmosphere was later described by Coverdale as “great” and ”positive” for the band.

Come An’ Get It still contained the blues-style ballads with which Whitesnake cut their teeth, while the likes of the title track and Wine, Women An’ Song saw Coverdale developing a provocative style of songwriting he was fast making his own: “If I can make you smile/I will raise my glass,” he sings on the latter, “But if you don’t like it/Then, baby, you can kiss my ass!” In a different vein, the brooding, melodramatic masterpiece Don’t Break My Heart Again returns to the kind of vulnerability that had helped Fool For Your Loving scale the charts.

Elsewhere, Lonely Days, Lonely Nights finds the group asserting their blues-rock roots, while album closer Till The Day I Die finds Coverdale at his most introspective and philosophical, rounding Come An’ Get It off with a track that builds, Led Zeppelin-like, from acoustic intro to hard-hitting bombast.

“It took us up to the next level”

Hitting the shelves on 11 April 1981, Come An’ Get It was, in David Coverdale’s view, early Whitesnake’s finest moment. “Even though we had some great songs on each album,” he later said, “I don’t feel that we came as close as we did on [Come An’ Get It], as far as consistency is concerned.”

Fans agreed, sending the album to No.2 in the UK – their highest chart position at home – where it was kept off the top spot only by Adam And The Ants’ Kings Of The Wild Frontier. Going gold by the end of the year, Come An’ Get It also kept Whitesnake on the road for a five-month tour, which kicked off in Germany three days after the album’s release. Staging a five-night residency at London’s Hammersmith Odeon, performing eight shows in Japan and heading to the US in support of Judas Priest and Iron Maiden, Whitesnake laid the groundwork for the worldwide success of future 80s high points Slide It In, Whitesnake and Slip Of The Tongue.

“I just remember the magic of Donington,” Coverdale recalled of their appearance at 1981’s Monsters Of Rock festival, where they played second on the bill to AC/DC. Speaking to Classic Rock’s Geoff Barton, he continued: “There were so many people and it was a great festival in those days. There was a fantastic atmosphere… There was a fun part where an aeroplane flew over the site as we were playing, and Micky and Bernie machine-gunned it with their guitars. Pretty cool. I think it was the biggest show we’d played up to that time, and it paid off for us. It took us up to the next level.”

Two years later, Whitesnake were back – this time as headliners.