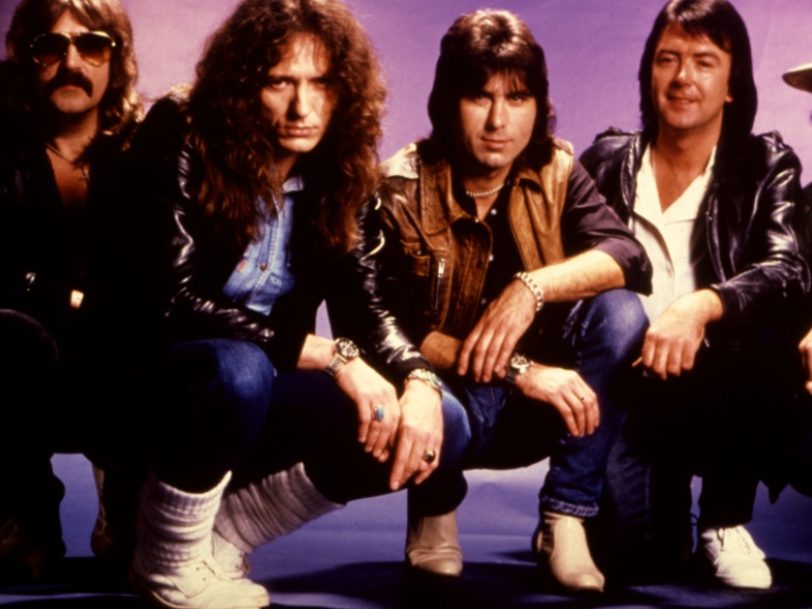 ‘Slide It In’: How Whitesnake Shot Off Like “A Runaway Train”

The stalwart rockers’ profile-raising sixth album, ‘Slide It In’ did the trick for Whitesnake in the US – with help from a timely remix.

Though not their biggest seller, Whitesnake’s sixth album, Slide It In, is arguably their most pivotal work. Peaking inside the UK Top 10 following it’s release at the start of 1984, the record consolidated the success of band’s previous hit UK albums Come An’ Get It and Saints & Sinners, but it also played a key role in their quest to break the US.

However, Slide It In’s acceptance stateside was by no means a given. Indeed, both band and album went through a series of drastic changes along the way and, while the record ultimately triumphed, Whitesnake themselves emerged from the experience as a very different group.

Listen to ‘Slide It In’ here.

“I realised that it wasn’t the same band”

Most of the Slide It In sessions took place at Musicland Studios in Munich, Germany, during 1983. Producer (and former Jimi Hendrix engineer) Eddie Kramer initially manned the console, but the personnel shake-up Whitesnake underwent while making Saints & Sinners had changed the group dynamic.

“I realised that as soon as we started rehearsing and playing that it wasn’t the same band,” guitarist Micky Moody told Hard Roxx magazine in a 1997 interview, adding of some of the newest recruits, “Mel Galley is very talented, a good singer, a great guitar player… Cozy [Powell] was a great drummer, I always had a lot of respect for him, but he just didn’t have any feel for the old Whitesnake sound.”

Along with long-standing keyboardist Jon Lord, Moody left the group after the original album sessions were completed. However, he left a notable parting gift in co-writing the smouldering, bluesy Slow An’ Easy, one of a slew of great hard-rock tunes featured on Slide It In. Kramer, though, expressed doubt that the group’s new material included any big hits.

“I know I was happy with it, but Eddie felt we were still missing a killer single,” frontman David Coverdale revealed in a 2019 episode of The Rhino Podcast. “He asked me if I had anything else, so I picked up my guitar and sang the first few lines of Guilty Of Love. His eyes lit up and he was going, ‘That’s it, that’s it!’ So we recalled everyone to the studio, emptied a couple of bottles of gin and tonic, and we cut the track. We premiered it live at the Monsters Of Rock at Donington in 1983. It’s a big song and still a lot of fun to play.”

Guilty Of Love and the slow-burning Give Me More Time (which Coverdale says “could almost be a Stax or Motown song if you take off the big drums and guitars”) both planted their flags in the Top 40 of the UK singles chart. Yet while Slide It In also peaked at No.9 at home, Whitesnake’s new US label, Geffen, were unhappy with the record’s production.

“I was absolutely not into Geffen’s idea of remixing it”

Slide It In had hit the UK shelves on 30 January 1984, but its US release was delayed for over two months while Geffen expressed a desire to remix it – a decision which didn’t please Coverdale, not least because he was bedding in a new version of the band.

“I was absolutely not into Geffen’s idea of remixing it,” Coverdale asserted on The Rhino Podcast. “However, my bass player, Neil Murray, had just re-joined me, and I had a hotshot new guitarist, John Sykes, I’d just stolen from Thin Lizzy. I said to Geffen, ‘Go ahead and remix it, but if so, I want my two new guys on it.’”

Geffen brought in renowned producer Keith Olsen, famous for his work with Fleetwood Mac and Rick Springfield, to work on the recordings. With dextrous care, Olsen added new parts recorded by Sykes and Murray, and brought more brightness and punch to Slide It In’s overall sound. The remix proved to be the right call: released in the US on 16 April, the new, radio-friendly edition of the album shot to No.40 on the Billboard 200. It also yielded breakthrough US hits for Whitesnake courtesy of Slow An’ Easy and the explosive Love Ain’t No Stranger.

“We’d become a kind of British Van Halen by that time,” Coverdale said in 2019. “We toured with Dio after the album came out, and while it was only around six dates, we sold a lot of albums thanks to that exposure. All that was setting up the awareness factor for the band for the next time around.

“In the US, radio was insanely supportive of Slide It In, so that meant radio was chewing at the bit to play the singles from the next album,” he added. When the group finally followed Slide It In, with 1987’s Whitesnake, the new record did better in the States than it did in their long-supportive homeland.

“But also MTV was the icing on the cake,” Coverdale continued. “It was so dominant back then. When they put the videos for the singles off Slide It In into heavy rotation, it actually saved me five years of hard touring around the US, because they were placing our songs in everyone’s living room. Thanks to MTV and US radio, being in Whitesnake was like being on a runaway train for the next four years. That period really was amazing.”