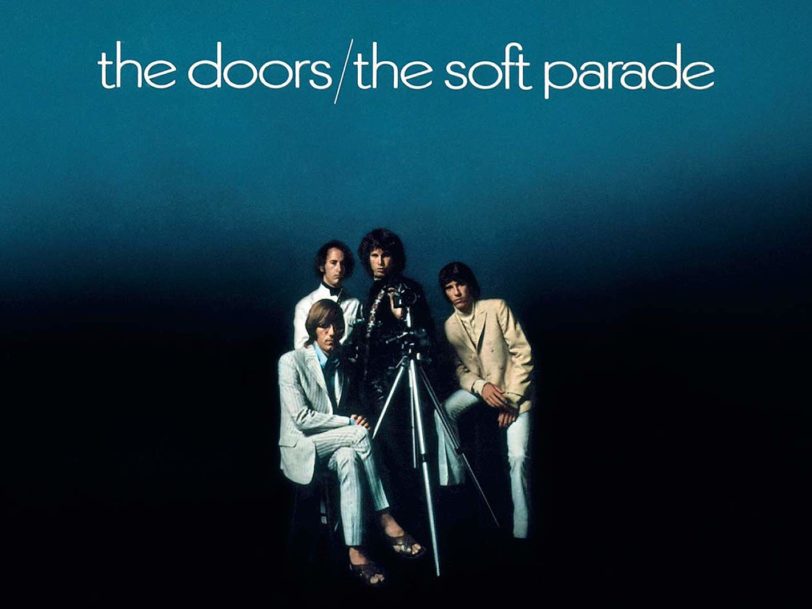 The Soft Parade: How The Doors Walked A New Creative Path

Rising out of ‘beautiful chaos’, ‘The Soft Parade’ found The Doors using horns and string sections to build an ornate new sound.

By the time they released their fourth album, The Soft Parade, in 1969, The Doors were arguably victims of their own success. Despite going platinum and cracking the US Top 10, their eagerly awaited follow-up to Waiting For The Sun challenged some listeners who found the group’s embrace of horns and string sections too big a leap from the psychedelic blues-rock The Doors had so masterfully spun on their self-titled debut album and its follow-up, Strange Days. Yet while the sonic window-dressing certainly found the group weaving a new sound, it also underscored their willingness to explore new creative avenues.

Listen to ‘The Soft Parade’ here.

“It was the hardest I ever worked in the studio”

Waiting For The Sun had topped the US chart and peaked inside the UK Top 20, thrusting The Doors onto the world’s stage when they set out on a prestigious European tour in the autumn of 1968. Outwardly, then, the band appeared to have done the heavy lifting by this point. Their record sales were consistently impressive and, as they entered 1969, they were packing out cavernous venues such as New York City’s Madison Square Garden. However, behind the scenes, the pressure to keep up with themselves was beginning to take its toll.

When they embarked on the The Soft Parade sessions at Los Angeles’ Elektra Sound West studios, late in 1968, The Doors had little in the way of newly penned material, and frontman Jim Morrison was becoming disillusioned with his rock-star image. Keen to devote more of his time to poetry and filmmaking, he distanced himself from the recording sessions and, when he was present, the heavy drinking he’d indulged in when The Doors made Waiting For The Sun resumed.

“It was like pulling teeth trying to get Jim into it,” engineer Bruce Botnick recalled in James Riordan’s Break On Through: The Life And Death Of Jim Morrison. “It was bizarre – it was the hardest I ever worked in the studio.”

Progress on the album continued during gaps in The Doors’ gruelling touring schedule in the first few months of 1969, but the tense atmosphere was further exacerbated by producer Paul A Rothchild’s disciplined approach and his singular artistic vision for the record.

“Our session looked like the one for ‘Sgt Pepper’”

Also in Riordan’s book, Elektra Records president, Jac Holzman, recalled that Rothchild’s quest for perfection, which often resulted in numerous retakes of songs, was “grinding them into the ground”, while the producer’s desire to coat a number of The Soft Parade’s songs in lavish arrangements ensured the studio bills quickly mounted. The sessions did, however, have their upsides – not least in terms of famous studio visitors.

“George Harrison was in town, so we got to meet a Beatle,” John Densmore enthused in his memoir, Riders On The Storm. “Alluding to all the extra musicians, he commented that our session looked like the one for Sgt Pepper. I guess that’s the kind of record we were trying to do. It was a thrill meeting him, although I found myself getting tongue-tied!”

In more recent decades, rock bands such as Echo And The Bunnymen and The Verve have been praised for their use of orchestration on landmark titles such as Ocean Rain and Urban Hymns, but The Doors’ integration of brass and strings wasn’t so readily understood at the time. And yet, four albums into their career, the sweeping strings added a fresh dimension to Robby Krieger-penned fare such as Wishful Sinful and the stirring Touch Me. A Billboard Top 5 hit, the latter song also benefitted from an expressive solo from saxophonist Curtis Amy, renowned for his work with soul icons Ray Charles, Marvin Gaye and Smokey Robinson.

“It was beautiful chaos”

Meanwhile, when Rothchild and his bandmates did get Morrison’s attention, the singer stepped up to the plate. Both Wild Child and the prowling Shaman’s Blues established themselves as contenders for a place among the best Doors songs, with Morrison’s visceral lyrics on the latter (“Cold, grinding grizzly bear jaws hot on your heels”) more than matching the music’s cyclical menace.

The Soft Parade’s tour de force, however, was its concluding title track: a suite-like affair which veered from folky introspection to surreal pop before settling into one of the band’s most hypnotic grooves as it played out across nine mesmerising minutes. Morrison was again fully engaged here, and the band later recalled how Paul Rothchild’s production took this otherworldly cut to an entirely new level.

“There were several vocals to choose from, and at the end of the song, just for fun, Paul turned them all on and it was beautiful chaos,” John Densmore enthused. “Jim’s vocals overlapped and commented on each other – one would say, ‘You gotta meet me at the crossroads,’ and another quickly retaliated, ‘Too late, too late,’ and so on. Schizophrenic multi-tracking. Rothchild and the studio had indeed become like the fifth Door.”

“Ray and I fulfilled our dream”

Released on 18 July 1969, The Soft Parade peaked at No.6 in the US, but The Doors’ experiments with a broader sonic palette were short-lived. By the time they returned, a mere seven months later, with Morrison Hotel, the group sounded leaner and considerably hungrier. The Soft Parade, however, had given them a welcome chance to bring their jazz inspirations further to the fore.

“The Soft Parade cost around $200,000 to make, which was a lot in 1969, and when Paul Rothchild arranged an orchestra or strings and horns for overdubs, we weren’t sure, but we thought, well why not – his intuition has paid off so far,” Densmore later recalled.

“After all, we got Curtis Amy, a West Coast jazz saxophonist, and George Bohanon, former trombonist with the Chico Hamilton Quartet, and told them to play like John Coltrane and Archie Shepp on Robby’s song Runnin’ Blue… so yeah, certainly Ray and I fulfilled our dream of having more of a jazz influence on The Soft Parade.”