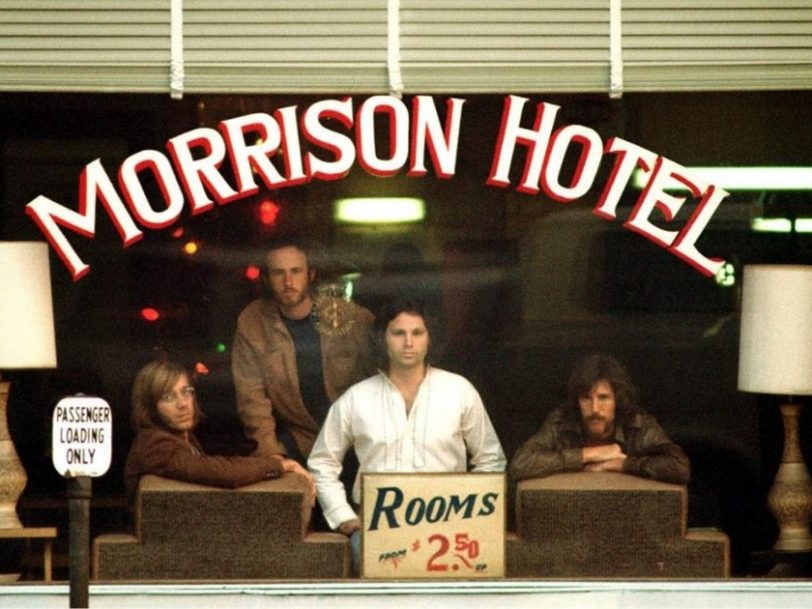 ‘Morrison Hotel’: How The Doors Checked In With A “Springboard Forward”

After ‘The Soft Parade’’s strings and horns, The Doors’ fifth album, ‘Morrison Hotel’, was a return to lean, powerful blues rock.

It’s fair to say The Doors were in a pretty dark place when they came to record their fifth album, Morrison Hotel. They’d begun 1969 as one of the biggest bands in the US, but their fortunes plummeted after a chaotic gig in Miami, Florida, in March, during which a drunken Jim Morrison allegedly exposed himself to the audience, calling them “a bunch of fucking idiots” and “slaves, letting people push you around”. With their singer arraigned on a potential felony charge, and the adverse publicity scaring off most concert promoters, the band were forced off the road for months.

“It was about trying to climb up from underneath intense negativity”

To compound The Doors’ woes, their fourth album, The Soft Parade, had failed to hit the highs of previous releases. Peaking at No.6 on the Billboard 200 during the summer of 1969, the record performed well enough, but it received a lukewarm reception from some critics who felt the band had over-egged the pudding with string arrangements and multiple overdubs.

However, while The Doors may have been down, they were by no means out for the count. Indeed, their enforced break from their intensive concert schedule afforded them an unexpected opportunity to create new music as 1969 wore on.

“If there was a silver lining to the Miami incident, it was that the cancelled shows left us with nothing but time to write,” guitarist Robby Krieger wrote in his memoir, Set The Night On Fire: Living, Dying And Playing Guitar With The Doors.

“Jim and I went back to collaborating the way we had in the early days. He had words, I had riffs and we finally had the chance to sit down and combine them. It wasn’t exactly like it was in my parents’ living room in our early days, since the trial, our personal lives and Jim’s filmmaking aspirations were new distractions, but it was at least more reminiscent of a more pure era.”

The Doors also decided that Morrison Hotel would signal a return to their roots. While they’d enjoyed experimenting with new textures on The Soft Parade, their new record would be notably more direct, with the emphasis on raw, blues-inflected rock’n’roll.

“We just got in the studio and jammed”

“We’d given up on the backwards pianos and the string sections, the Moog and all the experimentation,” Krieger confirmed. “Also, our production team, Paul [Rothchild] and Bruce [Botnick], had gotten much better at dialling in drum sounds quickly. And Paul had loosened up a bit when it came to insisting on extra takes. We just got in the studio and jammed, and the songs came together organically.”

Krieger remembered: “All we knew was we wanted to play something bluesy. I was fooling around with a riff, and Jim asked me to play it again while he threw some words over it. We had invited John Sebastian from The Lovin’ Spoonful to come in and play harmonica with us – credited as G Puglese, his father’s (misspelled) birth name, since his label prohibited him from playing on other bands’ albums – and he added some amazing improvisations on his own. Bit by bit, we added parts that worked and discarded others that didn’t, and by the end of the session, one of our greatest hits had taken shape almost on its own.”

The blues also informed tracks such as Maggie M’Gill, the louche, jazzy The Spy and the raw, spirited You Make Me Real, yet overall, Morrison Hotel’s sonic palette was significantly broader. The album also yielded a great, celebratory pop song in Ship Of Fools, two highly underrated ballads courtesy of Blue Sunday and Indian Summer, and also an atypically funky rock workout, Peace Frog, which has, over the years, grown in stature to become take its place among the best Doors songs.

The song featured some ominously visceral lyrics, many of which Morrison repurposed from an earlier poem titled Abortion Stories. When aligned with a sinewy rhythm and Krieger’s steely, percussive guitar figures, Peace Frog sounded like vintage Doors.

“Peace Frog started with jamming a G chord and occasionally hitting the low E string on a guitar with out-of-phase pick-ups, which gave it a funky wah-wah sound,” Krieger recalled in Set The Night On Fire.

“Ray [Manzarek, keyboards], John [Densmore, drums] and session bassist Harvey Brooks helped me flesh it out and record it. When Jim showed up, he liked what we’d done and paired the music with fragments of a couple of poems from his old notebooks – mostly Abortion Stories. Paul [Rothchild] baulked at Abortion Stories as the title as being too controversial for 1969, so Jim spat out a nonsense title that had nothing to do with the lyrics, and from then on the song was known as Peace Frog.”

“Morrison Hotel was a flophouse charging $2.50 for rooms”

As to the album’s title, Ray Manzarek had spotted the real life Morrison Hotel during a drive through downtown Los Angeles, and rightly believed it would be perfect for the band. However, capturing the now legendary album cover photo proved more difficult than The Doors had envisaged.

“It was a flophouse charging $2.50 for rooms, which was dirt cheap, even back then,” Robby Krieger later revealed. “When we went down there with photographer Henry Diltz to shoot the cover, the desk clerk wouldn’t let us take any photos in the lobby. We resigned ourselves to posing outside on the sidewalk, but when the desk clerk left his post, Henry told us to run inside and pose by the window, and he quickly knocked out a few shots before the clerk came back. We had our album cover.”

Released on 9 February 1970, The Doors were confident that Morrison Hotel would reinvigorate them, and their instinct proved correct. The band began the year with well-received shows at New York City’s Felt Forum, and their new album followed through by reaching No.4 on the Billboard 200 and also storming into the UK Top 20.

Buoyed by a raft of positive reviews (Circus pronounced it “good hard, evil rock… possibly the best album yet from The Doors”), Morrison Hotel later went platinum in numerous territories. A hungry, ballsy record, it also showed that The Doors were most definitely still open for business on the cusp of the 70s, and it set them up for their final masterpiece together, LA Woman.

“Actually, most of it was really fun,” Robby Krieger told Uncut in 2020, recalling the mood of the recording sessions. “We still didn’t think of it as work. It could be long hours and some of it was boring… but once we started playing, it was always fun. We were a pretty odd lot, but when you put us all together, it made sense.”

“Morrison Hotel was basically about trying to climb up from underneath intense negativity,” Bruce Botnick added. “Jim was under terrific stress waiting to hear what the courts were going to do [about Miami]. But they weren’t creatively bust. Morrison Hotel was a springboard forward.”