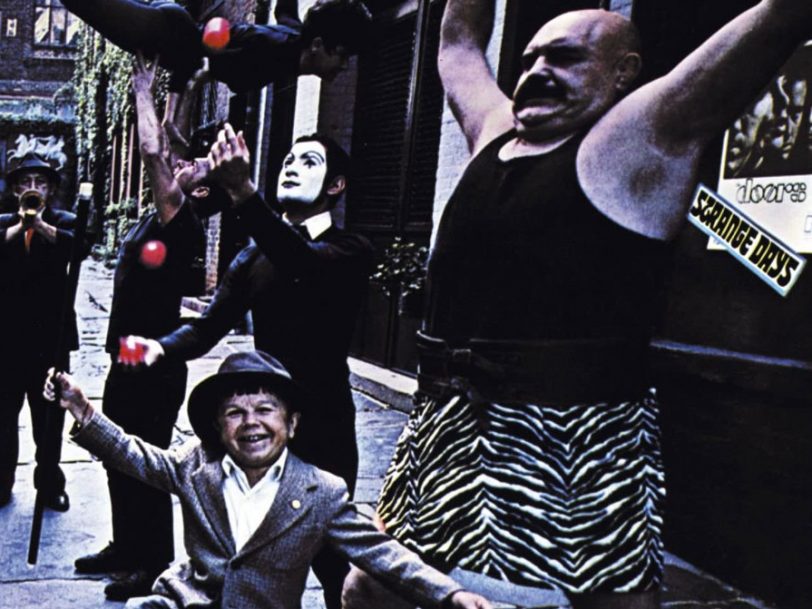 Strange Days: The Doors On The Threshold Of A New Creative World

Riding the crest of the wave, The Doors wanted the world… and they wanted it now. ‘Strange Days’ brought it right to them.

The Doors’ initial rise to prominence was little short of meteoric. Released in January 1967, their self-titled debut album yielded multi-platinum returns and also attracted rave reviews, with US publication Crawdaddy declaring it “an album of magnitude… and it’s as good as anything in rock”. It was the dream start that all great bands crave, but the record’s runaway success also meant the Los Angeles quartet felt the weight of expectation when it came to recording their sophomore set, Strange Days, mere months later.

“We started using the studio as the fifth Door”

“Despite the pressure, I would say that was our most fun recording,” drummer John Densmore recalled of the Strange Days sessions, which took place that summer. Admitting that the group had been “a little intimidated by the studio” while recording their first album, he told Louder in 2017, “It wasn’t our turf. We had to learn how to make records. And I would say by the second album we were more relaxed, and we started using the studio as the fifth Door.”

As Densmore suggested, The Doors had learnt a lot about recording techniques while capturing their debut album, and they relished the chance to return to LA’s Sunset Sound Recorders to lay down Strange Days. In the time between the two recordings, the studio was upgraded from a four-track facility to a state-of-the-art eight-track complex, and the group were keen to take full advantage – as was their producer, Paul A Rothchild.

“We knew we wanted to explore additional sounds and rhythms,” Rothchild recalled in James Riordan and Jerry Prochnicky’s book, Break On Through, “because we had decided from the experience of making the first album that it would be difficult to sustain a career with a band consisting of only organ, guitar, drums and a singer. So our challenge was to expand The Doors’ sound without overproducing it.”

To achieve this, Rothchild encouraged the group to explore new textures which would broaden their sonic palette. Keyboardist Ray Manzarek played harpsichord and clavinet on Strange Days’ second single, Love Me Two Times; added a marimba part to the smoky ballad I Can’t See Your Face In My Mind; and even played backwards piano parts on the dreamy, psychedelic Unhappy Girl.

“I was always trying to play something totally out there”

Elsewhere, Strange Days’ urgent title track featured one of rock’s earliest uses of a Moog synthesiser, while, for the poetic, avant-garde freak-out of Horse Latitudes, engineer Bruce Botnick took the white noise of a tape recorder and varied the speed by hand-winding it. This resulted in a wind-like sound effect, while the track’s otherworldliness was further accentuated by The Doors’ four members playing a variety of studio instruments, apparently at random.

However, while the band relished these opportunities to experiment, they also knew they couldn’t lose, as they had some grade-A material in their arsenal. While their debut album had been stuffed wall-to-wall with classics, Strange Days again featured great swathes of timeless music. Certainly, tracks such as the brittle, baroque-flavoured You’re Lost Little Girl, the compelling Moonlight Drive and the epic When The Music’s Over will always rank highly among the best Doors songs.

Clocking in at 11 minutes, the latter song inevitably drew comparisons with The Doors’ controversial denouement, The End, but with hindsight, it’s arguably the better song. With its dramatic build ups and drop downs, When The Music’s Over was a master class of ensemble playing, and it was matched by one of Jim Morrison’s most vivid lyrics – a dense, theatrical treatise which touched on proto-ecological concerns (“What have they done to the Earth?/What have they done to our fair sister?/Ravaged and plundered and ripped her and bit her”) before climaxing with the revolutionary exhortation, “We want the world and we want it now!”

“I’ll admit that When The Music’s Over was similar to The End in terms of length and structure”, Robby Krieger conceded in a 2016 Guitar World interview. “But so what? Something works, so you do it again. It’s one of my favourite songs.

“The reason it’s my favourite song is my solo – I think it’s my best,” the guitarist added. “That solo was really a challenge because the harmony is static. I had to play 56 bars over the same riff, which isn’t easy… But we did that a lot because we were really into John Coltrane, who pioneered modal jazz and soloed brilliantly over static harmonies and minimal chord progressions. I was always trying to play something that sounded like him – just totally out there in terms of tonality. I think When the Music’s Over is the closest I ever came.”

“It was a great sound, but it was insane”

In keeping with The Doors’ enigmatic image, Strange Days came in a suitably mysterious sleeve. Captured by Elektra’s in-house photographer/designer Joel Brodsky, it depicted a group of street performers in an obscure alley next to East 36th Street, between Lexington and Third Avenue in Manhattan, New York City. An image of the band themselves only appeared on a poster adorning the record’s rear sleeve, inciting Elektra to put stickers across the front, in order to help customers identify it more clearly.

The subtlety didn’t hurt sales, though. Released on 25 September 1967, Strange Days rocketed to No.3 on the Billboard 200, with help from its two attendant hit singles, People Are Strange and the infectiously bluesy Love Me Two Times. Consolidating on the advances the band had already made with their stellar debut, the album stayed on the charts for the best part of a year, and the critics also luxuriated in its quality. Writing in Esquire, Robert Christgau declared that The Doors “had come from nowhere to reign as America’s heaviest group” while Rolling Stone also lavished praise on the band, suggesting that Strange Days “has all the power and energy of the first LP, but is more subtle, more intricate and much more effective”.

“Each song has its own sound”, Ray Manzarek said in a retrospective interview with Louder. “The first album was ‘The Doors Live at The Whisky A Go Go’. That’s essentially what it is. The aural spectrum is the same. But on Strange Days, The Doors begin to show their versatility… It was a great sound, but it was insane. It was youth having no idea of its limitations!”