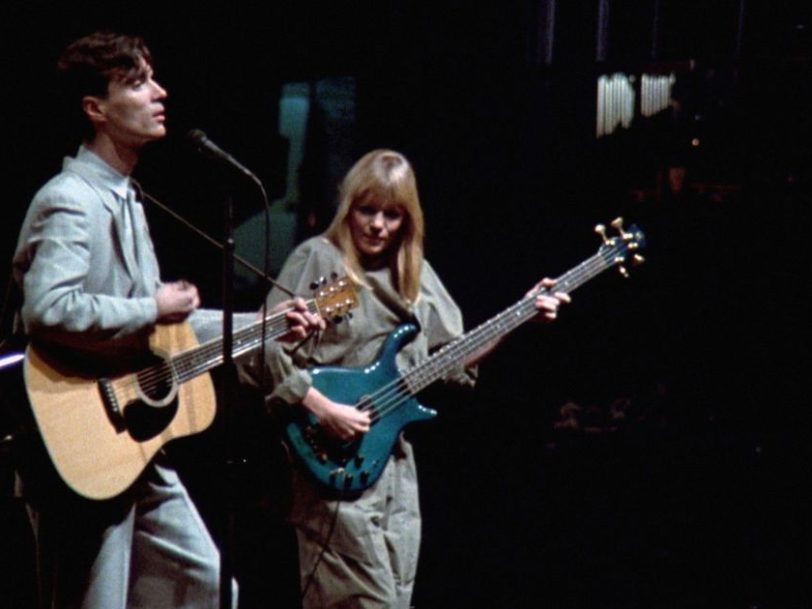 In 1983, Talking Heads were on a roll. Their latest album, Speaking In Tongues, had been a runaway success buoyed by the US Top 10 hit Burning Down The House, and they were poised to embark on a tour that still ranks among the most acclaimed in rock history. Captured on the concert film Stop Making Sense, and spawning one of the best live albums of all time, the group’s live show was unlike any ever attempted before or since.

As well as expanding the group’s line-up, Byrne exerted more control over the stage show. He insisted the band wear muted colours on stage and ensured that all the mic stands and drum kit were anodised black, so they wouldn’t reflect the stage lights. And he had some tricks up his own sleeve in terms of choreography and outfit choices, most strikingly the huge, oversized suit he’d change into towards the concert’s close. He’d acknowledge the suit’s notoriety in a 2001 interview with The Guardian, saying, “Yeah, that’s one for my tombstone. ‘Here lies David Byrne. Why the big suit?’”

“Nobody had a rock show this hot”

In his 2020 memoir, Remain In Love, Chris Frantz recalled how the live show made it to the silver screen. “It was a no-brainer that the Speaking In Tongues tour should be captured on film,” the drummer wrote. “As the tour progressed, the band and production got tighter and tighter. Nobody had a rock show this hot. One day we were approached by a young filmmaker named Jonathan Demme and his fellow filmmaker girlfriend, Sandy McLoed. They wanted to make a film of the show.”

The resultant live concert movie, Stop Making Sense, was shot over three nights at the Pantages Theatre, in Los Angeles, in December 1983. And Demme and Byrne’s approach to capturing the performances on film was more thoughtful and artful than any concert movie before.

The show began with Byrne alone on stage performing an intense version of Talking Heads’ breakthrough single, Psycho Killer, from the group’s debut album, Talking Heads: 77, armed with only his acoustic guitar and accompanied by a boombox playing a stark drum pattern. As the beat sputtered, Byrne flailed around the stage before regaining his composure. The effect was mesmerising, Byrne’s performance unforgettable.

With each song, a new band member was introduced to the stage, until the full expanded Talking Heads line-up settled in to deliver a superlative set. Byrne explained the thinking behind the staging to NME in 1984: “Our hope was that, through the way it was filmed, you do get to know the personalities of the band members and the various people who play onstage as they’re introduced, and that Jonathan would cut to them when they’re doing something that reveals their personality rather than when they’re doing something flashy like a solo. You think of them as people rather than as… something else.”

“It’s like doing a film of a play, rather than a documentary about a theatre company”

Bassist Tina Weymouth joined Byrne on stage for an elegiac Heaven, Chris Frantz took up the drum stool for an energetic Thank You For Sending Me An Angel, and guitarist Jerry Harrison completed the traditional Talking Heads line-up by joining for Found A Job. As the set progresses and the supplementary band members join, the road crew can be seen busily assembling the stage set behind the band – the show comes to life before the viewer’s eyes.

That idea of deconstructing the usual live experience was key, as Byrne told NME: “Stop Making Sense isn’t so much a film about the band as a film about that performance. It’s like doing a film of a play, rather than a documentary about a theatre company.”

Fittingly, there are dramatic moments aplenty in a setlist that boasts many of the best Talking Heads songs: the group blast through Burning Down The House with an incredible amount of energy, and yet Byrne and Weir still manage to summon the reserves to sprint on the spot towards the song’s climax. For the Remain In Light classic Once In A Lifetime, Byrne recreates the memorable choreography from the song’s promo video, and he also pulls out some snake-like dance moves and more running on a blistering take on Life During Wartime, a highlight from the Fear Of Music album. During a tender This Must Be The Place, he takes a lampshade for a dance partner, while on Take Me To The River, an Al Green cover the group originally recorded in 1978 for their second album, More Songs About Buildings And Food, the band reach ecstatic levels of gospel fervour. A special mention, too, to Tom Tom Club, the Talking Heads solo project masterminded by Frantz and Weymouth, who have a blast performing their hit Genius Of Love during an interlude.

Stop Making Sense’s companion live album was released in September 1984, paving the way for the concert film to open in cinemas across the US on 19 October. Without the visuals, the soundtrack album harnessed the power of the film with a selection of highlights, and it became a huge success in its own right, spending two years on the Billboard 200 and selling over two million copies in the US alone. Four decades on, both the album and the film remain thrilling and joyous documents of a band at their peak.

Check out the 10 Talking Heads facts you need to know.