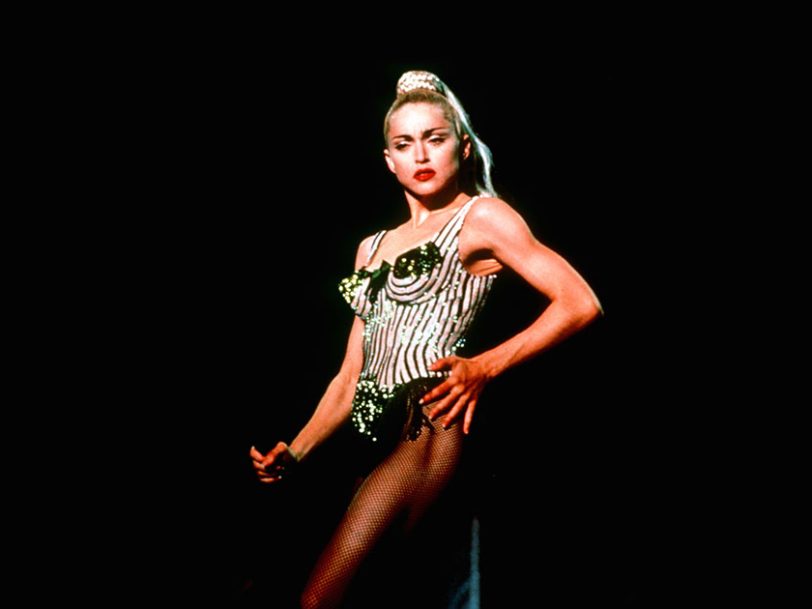 With a knack for pushing buttons – and keeping the ever-hungry media fed in the process – it can feel like there’s little we don’t know about Madonna. Since her international breakthrough in early 1984, the “Queen Of Pop” has reinvented herself dozens of times, enjoyed commercial and critical success of an almost unimaginable scale, and, along the way, brought up a family and raised awareness – and considerable sums of money – for causes she cares about. Think you know all there is to know about her? Here are ten Madonna facts that might surprise you.

Listen to the best of Madonna here, and check out the Madonna facts you need to know, below.

In the early 80s, Fame was one of the biggest shows on television. The production, which aired between 1982 and 1987, was a spin-off from the Alan Parker-directed 1980 movie musical of the same name (Parker would later direct Madonna in 1996’s Evita), and it created unlikely pop stars out of the young cast who enjoyed huge international hits such as Starmaker and Hi-Fidelity. In 1982, Madonna auditioned for the role of Danny Amatullo’s love interest. His character, Carlo Imperato, was set to be attracted to a sweet “girl next door” – a role the ever-controversial Madonna wouldn’t necessarily have suited. In the event, she was already on the road, performing club dates in support of her debut single, Everybody, at the time of the camera test.

When the producers of Madonna’s first hit movie contacted her team about using a fresh demo the singer had supplied for filming a nightclub scene, Madonna’s then manager, Freddy DeMann, had no idea the song even existed. In any case, he couldn’t authorise its release for the film, so passed the enquiry on to her record label. Discussions on the song’s use almost stalled, as label executives were keen for Desperately Seeking Susan’s producer, Sarah Pillsbury, to pick either Material Girl or Holiday instead, as they thought either one would help sell further copies of Madonna’s first two albums. Wiser heads eventually prevailed, and the new song, titled Into The Groove, would soon be the first in a record-breaking run of Madonna No.1s while also serving as a critical marketing tool for the film, which co-starred Rosanna Arquette.

The “Queen Of Pop” meets the king of pop art… Despite her mainstream stardom, Madonna emerged from New York City’s hip counterculture scene of the early 80s. Lesser-known Madonna facts from this period include her having dated cult artist Jean-Michel Basquiat, who later died of a heroin overdose; being close to influential graffiti maverick Keith Haring (she wore one of his jackets during a 1984 Top Of The Pops performance for Like A Virgin); and regularly hanging out with cult genius Andy Warhol. Fashion designer Maripol recalls driving home from Madonna’s Malibu wedding to actor in Sean Penn with Warhol and Haring, plus a rising young actor called Tom Cruise, who was hiding from the paparazzi!

4: There’s a wealth of unreleased material out there…

Madonna’s decision to reissue landmark albums in her significant creative legacy means fans might finally get to hear some of the material she recorded over the years but never officially released. A few of the tracks, such as a cover of ABBA’s Like An Angel Passing Through My Room, recorded with William Orbit during the Ray Of Light sessions, have leaked online, but there’s plenty still hidden away in the vaults. Among the most sought-after outtakes are cuts such as Warning Signs (recorded for the 80s movie Vision Quest, alongside Gambler and Crazy For You), First Is A Kiss (from the Like A Prayer album sessions) and Can’t You See My Mind, an offcut from American Life.

5: Take A Bow became her biggest US hit, but was one of her smallest in the UK

Singles sales statisticians adore Madonna, as her chart performance across the 80s and 90s is unparalleled. Imagine their surprise when her biggest-ever US success, Take A Bow (which enjoyed seven weeks at the top of the Billboard Hot 100), put an end to her record-breaking run of 35 consecutive Top 10 hits in the UK, when it failed to make that year’s Christmas No.1 spot. Also among the Madonna facts worth knowing: her biggest worldwide singles success remains the 1990 smash Vogue, and it wasn’t until 2008’s Miles Away that any of Madonna’s UK singles would fall short of the Top 30 since her breakthrough.

6: She received an awarded for her pioneering work surrounding AIDS awareness

Madonna’s commitment to identity and sexual politics is well recognised – at the height of the AIDS crisis, which raged across the late 80s and into the next decade, she spoke repeatedly about risks from the virus and campaigned for better funding both for those battling the disease and for medical research. In 1990, she was honoured with an Award Of Courage by amfAR, The Foundation For AIDS Research. “Now, I’m not HIV positive,” she told the reception in response to the relentless rumour mill that surrounded her, “but what if I were? I would be more afraid of how society would treat me for having the disease than the actual disease itself.” It was a calculated pushback at those who looked to bring her down despite her achievements.

7: Her planned first single was abandoned

When Sire Records supremo Seymour Stein first heard the Madonna demos played to him while in hospital ahead of signing her, he seized on a track called Ain’t No Big Deal that he earmarked for her first single. The song, penned by Angel songwriter Stephen Bray, was eventually abandoned in favour of Everybody once final mixes had been completed by Mark Kamins, the DJ who had introduced the singer to Stein. Bray then licensed the composition, and it was covered by the band Barracuda in 1983, meaning Ain’t No Big Deal didn’t even make it onto Madonna’s debut album. In fact, the song wouldn’t appear on a Madonna release until 1985, when it was used as a track on the Japanese 12” of Dress You Up, and then again in 1986, when it issued as a B-side of various True Blue album singles in different markets.

8: She once performed a Rosemary Clooney classic for a movie

Madonna’s movie career certainly contains many musical highlights, such as Sooner Or Later, from Dick Tracy (and its soundtrack album, I’m Breathless), but surely the most unusual is her surprising cover of the 1951 Rosemary Clooney classic Come-On-A My House. Madonna’s in-character rendition segues into a spirited lip-synched performance during Swept Away, a 2002 romcom directed by Guy Ritchie, who was then married to Madonna.

9: Madonna is still breaking records on the US dance charts

When it comes to dancefloors, DJs still can’t get enough of Madonna. The “Queen Of Pop” is the first act ever to score as many as 50 No.1s on any of the Billboard charts, and, inevitably, it’s the club listings where she has achieved this incredible feat. Her first time at the top of that chart was with the pairing of Holiday and Lucky Star, in 1983, and her last trip to the summit to date was with 2020’s I Don’t Search I Find, from the previous year’s Madame X album. That track was her tenth in a row to reach the US Dance Club Songs peak, and all 50 chart-toppers have been collected in the 6LP remix collection Finally Enough Love: 50 Number Ones.

10: Pet Shop Boys’ Heart might have been recorded by Madonna

Madonna has a long history with the UK’s most successful synth duo. In October 1983, soon-to-be Pet Shop Boy Neil Tennant interviewed her when he was working on the US launch of Smash Hits magazine; in 2006, the duo remixed Sorry, and that same year they duetted with Robbie Williams on the hit She’s Madonna. But one of the most intriguing Madonna facts concerns Pet Shop Boys’ 1988 UK chart-topper Heart. The song was written with Madonna in mind but, when they worried it might be rejected, they considered it for Hi-NRG singer Hazell Dean before finally deciding to keep the track for themselves – turning it into one of the best Pet Shop Boys songs in the process.