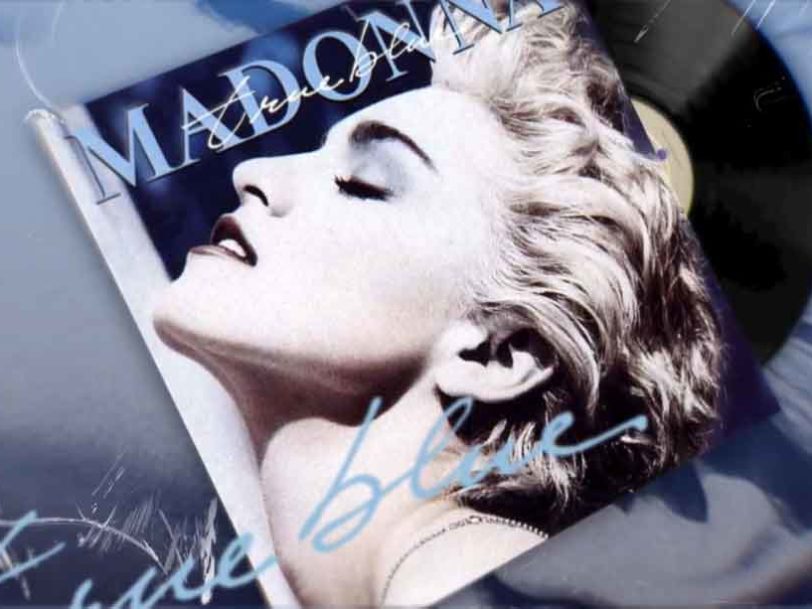 True Blue: How Madonna Committed Herself To The “Queen Of Pop” Role

An exercise in unashamed hit-making, ‘True Blue’ saw Madonna pitch herself at superstar status, landing in a league of her own.

That True Blue would become the world’s biggest-selling album of 1986 – and Madonna’s biggest global hit – perhaps had an air of inevitability about it. The first signs of her canny ability to stay just one step ahead of her audience were sown with the leftfield turn of the previous year’s accomplished ballad Crazy For You, while the dizzying pace of her film work, touring and recording output would put even the most hardened of veterans to shame.

In many ways, Madonna was a veteran at this point. Though her big breakthrough had only really taken place just 18 months earlier, with the Like A Virgin single, she’d been sweating the clubs and learning the business since signing to Sire Records in 1982, and had years of gigging experience before then. At its first Hollywood playback to label executives, however, True Blue was billed by the singer as her “first record” because of how involved she was in its creation. She co-wrote each of its nine songs and had a hand in producing them all, too, working with Patrick Leonard and Stephen Bray.

Seven of those nine songs were world-class pop standards, while the other two – the 60s candyfloss cut Jimmy Jimmy and the Live Aid-premiered Love Makes The World Go Round – still stand up well alongside them. Eventually, five singles were released from the album, and each made the top of the charts in either the UK or the US (with Papa Don’t Preach, which opened the record, hitting No.1 on both sides of the Atlantic around the album’s release date in June 1986).

In a league of her own

Live To Tell was perhaps the most exquisite of True Blue teases. Issued in March that year and featuring on the soundtrack for her then-husband Sean Penn’s film At Close Range, it premiered a radically different Madonna: longer hair, teased into a 40s style, and a look that was understated in almost every way. The epic stop-start power ballad made it to the top of the charts in the US and Top 5 almost everywhere else. Change would be the new constant.

The controversy came roaring back for Papa Don’t Preach, whose theme of teenage pregnancy raised eyebrows even as it found chameleon Madonna picking roles that moved her personal narrative forward. It’s now easy to see that, across her lengthy career, she has adopted many personas, and True Blue represents her first part overtly pitched at reaching superstar status. Diana Ross and Debbie Harry may have enjoyed moments wearing the crown, but here the true “Queen Of Pop” landed in a league of her very own.

As subversive as early MTV dared to go

True Blue’s title track was a catchy, 60s girl-group homage, while Open Your Heart is the album’s punchiest pop-dance cut, closest to the material Madonna had made on previous records. Though the song was originally demoed for Cyndi Lauper, Madonna’s extra lyrics and urgent interpretation make it almost unthinkable as working successfully for anyone else. The cut’s extended remix, produced by Steve Thompson and Michael Barbiero, captures all the thrilling intensity of the era’s dancefloors, while the Jean Baptise-Mondino promo video is about as subversive as early MTV dared to go.

Issued in the spring of 1987, La Isla Bonita was the album’s final single, and it remains beloved of radio playlists to this day. With a soft melody making the now-established point that Madonna was as comfortable on an AOR playlist as she was on a cutting-edge dance chart, the song would go on to find favour most universally in Europe while topping the UK charts on sales alone for a fortnight – impressive stuff given that it had been lifted from an album that was eight months old and which had already been the previous year’s national highest-seller.

The album’s final cuts, from the CinemaScope pop-dance of White Heat (featuring Jimmy Cagney dialogue sampled from the 1949 film noir of the same name) to the effervescent single-that-should-have-been Where’s The Party, round off a masterclass of unashamed hit-making whose exuberant positivity nevertheless made room for the occasional, ever-so-slight provocation.

Released on 30 June 1986, True Blue – boasting colourised Herb Ritts artwork which stands among the most famous Madonna album covers – found its way into a staggering 25 million homes worldwide. Today, it showcases the brilliance of 80s pop, where style at least equalled substance, and those hits – made bigger in part by the constraining limitations of pre-digital supply – could get the whole globe dancing as one. Straddling that globe, Madonna truly had the world at her feet.

Check out our best Madonna songs to find out which of those hits made the cut.