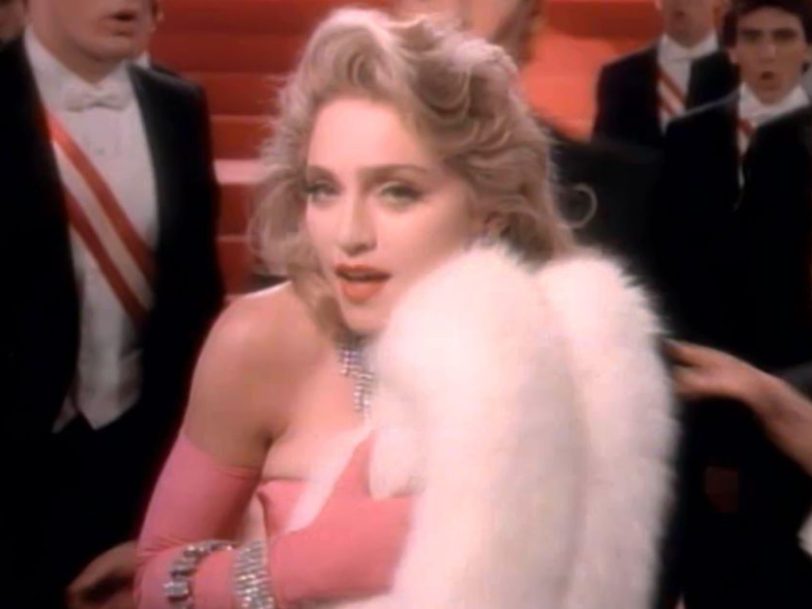 It was the song that – for a time – Madonna would feel conflicted over. But Material Girl, the second single to be lifted from the Like A Virgin album, would arguably do more than any other to cement the “Queen Of Pop”’s position as both an 80s icon and one of the brightest stars of the MTV age.

Nile Rodgers, the Chic genius who had recently worked with David Bowie on his commercial pinnacle, Let’s Dance, and was cannily drafted in by Madonna to work his magic on her second album, had wanted Material Girl to launch the record. Of course, his protégé – already securing a reputation for knowing her own mind – considered Like A Virgin’s title song a more certain bet. Unsurprisingly, Madonna won that battle and, once released, Like A Virgin topped the US charts for six weeks.

With Material Girl lined up for release as album’s the second single, on 30 November 1984, no expense was spared on a lavish promo video. Its iconic restaging of the Marilyn Monroe performance of Diamonds Are A Girl’s Best Friend, from the 1953 classic Gentlemen Prefer Blondes, cast Madonna as a charismatic star unmoved by her suitor’s flashy advances. Demanding authenticity, she is ultimately seduced by a simple bouquet and a ride in an old car.

This juxtaposition of contradictory motivations, an empowering life mantra and the slickest of presentations is in many ways a metaphor for Madonna’s lasting appeal. Here, there’s a blindingly compelling hook – in this case, a bass-anchored, catchy synth-pop hit created by songwriters Peter Brown and Robert Rans – a high-energy video, directed by Mary Lambert (who had already helmed the clips for Borderline and Like A Virgin), and a whole heap of more subtle messaging going on a layer below – for those that cared to dig a bit deeper…

A tongue-in-cheek homage to the power-obsessed 80s

The reason Madonna grew tired of the track, which had arguably always been intended as a tongue-in-cheek homage to the power-obsessed 80s, is that almost everyone took it literally, and the “Material Girl” nickname would follow her around for decades. In 2015, said she never wanted to hear the song again.

Inevitably, Material Girl was an enormous hit, reaching No.2 in the US and No.3 in the UK, and Madonna would perform it on many of her tours, including her inaugural The Virgin Tour, in the US, later that year. She would revisit the song on global dates for her Who’s That Girl shows, in 1987; the iconic Blond Ambition concerts of 1990; and 2004’s Re-Invention World Tour. On the Like A Virgin and Who’s That Girl dates, she even threw out fake paper Madonna money at the end of the song (good luck trying to get hold of one today without mortgaging your home). It’s classic Madonna – if only commentators had been able to keep up. Regardless, her vocal delivery should have been enough to get the joke across – Madonna sings Material Girl with real exaggeration. This song was never meant to be taken seriously.

Material Girl fuelled the Madonna-mania of the mid-80s

Material Girl also marked another significant moment in Madonna’s life: actor Sean Penn met his future wife when he visited the video set for the promo clip. The couple embarked on a whirlwind romance and were married on Madonna’s birthday, 16 August 1985, creating the tabloid event of the year when press helicopters circled the Malibu, California, wedding venue.

The song has since been covered by artists as diverse as Idina Menzel (in 2021’s screen adaptation of Cinderella) and Britney Spears (on her first big tour). In 2022, Madonna perhaps made her peace with Material Girl by updating it with Saucy Santana on Material Gworrllllll! Surely no one could miss the humour and irony in this treatment?

It’s hard to imagine Madonna’s career without this critical song, whose cultural impact arguably far outreached its notable commercial success. As one of the best Madonna songs of all time, there’s no doubt Material Girl fuelled the Madonna-mania of 1985, revealing, possibly for the first time, the “Queen Of Pop” as an artist with a chameleon-like ability to build ever-more intriguing personas. The performance-art side really starts here.