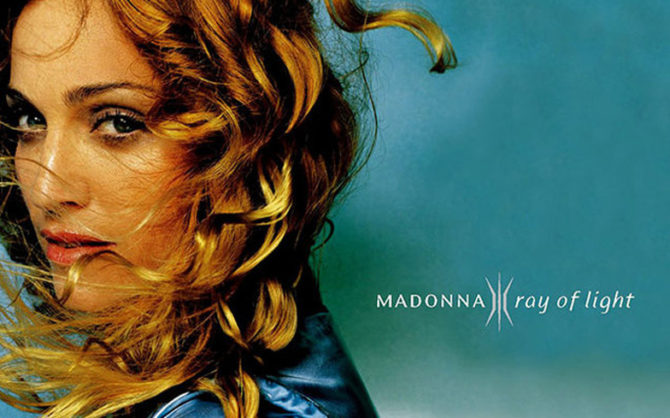 Bolstered by producer William Orbit’s experimental electronica, the ‘Ray Of Light’ album made it possible to imagine a 21st-century Madonna.

What professional peaks were there really left for the Queen Of Pop to scale 14 years after her 1983 breakthrough? Now with more records sold than even she may have expected; groundbreaking concert tours under her belt; a recent Golden Globe; and finally, perhaps, even critical acceptance… a conservative approach should be the obvious answer. But then that has never really been Madonna’s style. For Ray Of Light, her final album of the 90s, she was ready to prove she could keep pace with the changing face of music at the end of the millennium.

Listen to Ray Of Light here.

“My music is a reflection of where I am”

A lot had changed in Madonna’s life – she had recently become a mother and wanted her next recordings to reshape her sound, too. Plans to reunite with 1994’s Bedtime Stories collaborator Babyface were aborted in early 1997 after initial sessions signalled more of the same. That really wouldn’t do. The idea to collaborate with the experimental British producer William Orbit was, however, a leftfield move. Their vision was to pair his sonic eccentricity with Madonna’s trademark melodic flair and more confident vocals – sharpened-up considerably from the recent Evita movie soundtrack.

By Madonna’s restless standards, the recording sessions with Orbit proved laborious, with the maverick insisting getting everything spot-on. “I’d get to the end of the day and we wouldn’t really have accomplished much, but we’d sort of get some textures for a song,” Madonna recalls. Across four months the Ray Of Light album slowly took shape, with Orbit co-producing all but one of the 13 cuts (the Japanese market got an extra track in Has To Be).

Pop-art of the finest form

Longtime fans were possibly more excited by the writing reunion with Patrick Leonard, who had steered Madonna’s True Blue album to huge sales just over a decade earlier and shaped her subsequent critical game-changer, Like A Prayer. Leonard shares credits on four Ray Of Light tracks, while veteran hitmaker Rick Nowels might have been expected to helm all the singles picked from the album, but in fact only The Power Of Goodbye was lifted for single release from his three collaborations.

In truth, Ray Of Light is very much a William Orbit project, with his experimental electronica threading its way across even the most traditional pop cuts. Opening the record with Drowned World/Substitute For Love signalled this was not going to be a traditional Madonna pop confection. The song has been described a creative palate-cleanser – not quite a ballad, but a melodic jam that’s as much personal statement and sonic scene-setter as anything else. It was a brave choice for single release (in many markets) but then, when released, on 22 February 1998, Ray Of Light was also a bold and startling album that took the public by surprise.

Lead single Frozen – the first Madonna single to enter the UK charts at No.1, and a subsequent US Billboard No.2 – was something of a risk for a first single, but the gamble paid off. A sweeping electro-ballad, its majestic, timeless melody (created with Leonard) forever ensured its place among the best Madonna songs, and it was a highlight of the 2019/2020 Madame X tour. No reference to the song can be complete without mention of its hypnotic Chris Cunningham promo video, inspired by The English Patient, filmed in the Mojave Desert and casting Madonna as a mystical creature of the night. Causing A Commotion seemed a long time ago…

Across such tracks as Swim, Candy Perfume Girl and Skin, there’s a textured eccentricity that threatens but never quite overwhelms the songwriting. This is pop-art of the finest form – drenched in atmosphere and every bit as experimental as the work of the more high-brow avant-garde. Mer Girl, meanwhile, revisits the theme of Madonna’s late mother and is a haunting, meandering lament written with Orbit – a powerful personal statement that’s startling in its raw theatricality. It closes the album and offers stark evidence that Madonna didn’t want listeners to finish Ray Of Light sated; she was looking to leave them unsettled by the restlessness of her reignited creative energy

Even Ray Of Light’s more traditional moments come with a twist. The frenetic techno-pop title track is part-disco, part-melodic mania and draws on a 1971 composition by folk duo Curtiss Maldoon. Madonna reworked the song (so much so, it’s become one of those songs you didn’t know were covers and an instant classic was the result, later winning a Grammy for Best Dance Recording.

Elsewhere, The Power Of Goodbye is arguably the only Ray Of Light song that could have come from an earlier Madonna era. Still, its sturdy balladry is draped in Orbit’s colourful production palette and was a reliable choice for single release, falling just shy of the Billboard US Top 10, but making No.6 in the UK when paired with Ray Of Light’s sweet lullaby Little Star – recorded for Madonna’s new daughter, Lourdes, and produced with Marius De Vries (the only Ray Of Light production that didn’t involve Orbit). Final single Nothing Really Matters also edged closer to Madonna’s signature dance style, but Orbit’s handling of the jam elevates it to something more interesting (and there was the obligatory eye-catching video to liven things up still further).

Critics fell over themselves to praise Ray Of Light, applauding Madonna’s bravest attempt yet at a sonic reinvention, creating something that sounded like nothing else around at the time. If it was a bold move for an artist arguably then as famous for her business sense as for any sort of creative credibility, it certainly paid off. When the Grammys came around, Ray Of Light won four of its six nominations, including Best Pop Album. At the 1998 MTV Video Music Awards, there were six further wins.

In time, Ray Of Light would be credited with positioning electronica firmly in the pop mainstream, but Madonna wouldn’t linger; there was a sense that, having just proved she could master the genre, it was already time to move on. “I don’t consciously think, Oh, I have to change,” she said at the time. “Hopefully, my music has always been a reflection of where I am, and where I am is different from where I was when I made my last record.” Ray Of Light made it possible to imagine a 21st-century Madonna, and showed – even at this stage of her career – there were ambitious commercial and creative successes still in her sight.

Check out our best Madonna songs  to find out which Ray Of Light tracks continue to shine.