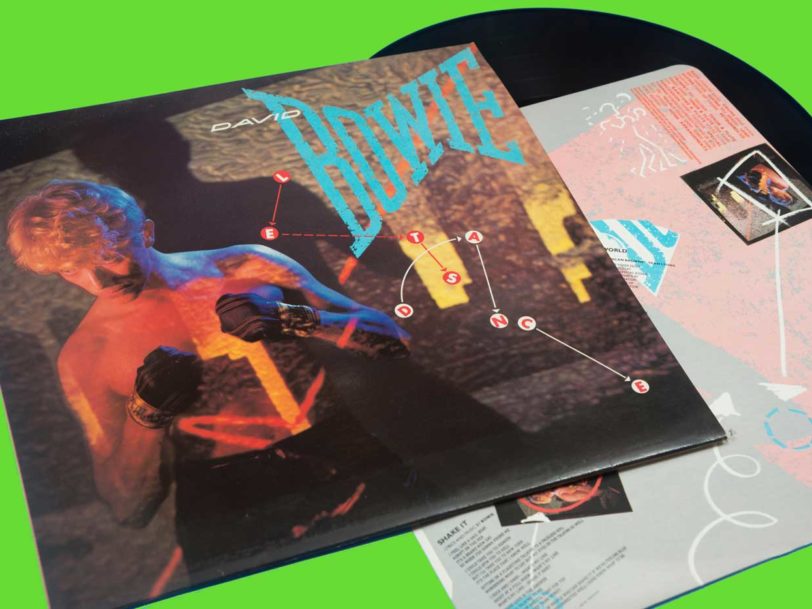 Let’s Dance: How David Bowie Came Out Fighting For The Pop Crown

Looking to the mainstream with ‘Let’s Dance’, David Bowie scored his biggest-selling album while unleashing some of his most-loved songs.

Following the recording sessions for 1980’s art-rock landmark, Scary Monsters (And Super Creeps), David Bowie entered a period of artistic exploration away from the glare of pop stardom. Pursuing his interest in acting, he starred in the Broadway play The Elephant Man from July 1980 to January 1981, and played himself in the German film Christiane F, for which he also provided the soundtrack. He’d intended to promote Scary Monsters, which had been released in September 1980, with a tour, but the murder of John Lennon, his close friend and collaborator, that December affected Bowie a great deal. But though he stepped away from the limelight, retreating to his home in Switzerland in January 1981, Bowie continued to work, finding his way towards the new sound he would unveil on his 15th album, Let’s Dance.

Scoring an enormous hit with his Queen collaboration, Under Pressure, released in October 1981, and recoding with electronic music pioneer Giorgio Moroder for the title track of the 1982 film Cat People, Bowie kept his hand in on the charts with a new, mainstream-minded approach to his music. Meanwhile, he continued to build his acting résumé. Taking the lead role in a BBC adaptation of Bertolt Brecht’s play Baal resulted in an accompanying soundtrack EP, while parts in the movies The Hunger and Merry Christmas, Mr Lawrence saw him play a vampire and a prisoner of war, respectively. All the while, his musical stock was as high as ever – the leading lights of the New Romantic and post-punk movements owed a huge debt to Bowie, both in terms of sound and style, and with the gaps between albums growing, his next record was hugely anticipated.

“I’d been mandated to make hits”

Typically, Bowie looked to shake things up again, choosing to work with one of the hottest hitmakers of the day, Chic’s Nile Rodgers, after a chance meeting at Continental, an after-hours bar in Manhattan. “We wound up talking all night about all sorts of music,” Rodgers recounted in his 2011 autobiography, Le Freak. “I don’t remember anyone ever bothering us; we were like old friends sitting on a couch in someone’s living room. The wide-ranging, reference-heavy, autodidactic rap made me feel like I was back in the mix of the beatniks, hippies, and jazzers of my youth. At some point I must have given him my phone number, but I don’t remember doing so.”

Bowie contacted Rodgers to arrange a meeting in New York City, and the two musicians quickly bonded over a shared love of jazz and museum visits. In a 2016 interview with Rolling Stone, Rodgers remembered the moment Bowie felt he’d found the aesthetic of the new record: “He came to my apartment one day and he had a picture of Little Richard in a red suit getting into a red Cadillac. And he said to me, ‘Nile, darling, the record should sound like this!’ And he showed me the picture. And I knew exactly – think of how crazy this was – what he meant. He didn’t mean he wanted his record to sound like a Little Richard record. He said, ‘This visual thing is what we want to achieve aurally in every sense of the word.’ Even though the picture was obviously from the 50s or the early 60s, it looked modern. The Cadillac looked like a spaceship, and Little Richard was in this monochromatic outfit which then later on became David Bowie in the yellow monochromatic outfit with the yellow hair.”

Rodgers may as well have been describing the dancefloor-filling song that would become the new album’s title track – a thrilling, souped-up update on classic 50s rock’n’roll.

“I wanted people that I’d never worked with before”

It didn’t start off quite that way, though. In the sleevenotes to the 2018 box set Loving The Alien (1983-1988), Rodgers recalled the embryonic state Let’s Dance was in when they began demo sessions in Switzerland: “Not long after I arrived, Bowie strolled into my bedroom with a guitar. ‘Hey, Nile, listen to this,’ he said, his skinny frame silhouetted just inside the doorway. ‘I think it could be a hit.’ He started strumming a 12-string acoustic guitar that had only six strings. What followed was a folksy sketch of a composition with a solid melody: the only problem was it sounded to me like ‘Donovan meets Anthony Newley’. And I don’t mean that as a compliment. It wasn’t bad by artistic standards, but I’d been mandated to make hits, and could only hear what was missing.”

Once they set to work on a full arrangement, a pop blockbuster was born. The rest of the Let’s Dance album was then demoed in just a few days with assistance from Erdal Kızılçay, a talented multi-instrumentalist from Turkey who would go on to work with Bowie on Never Let Me Down, The Buddha Of Suburbia and 1. Outside.

Bowie’s wish for a fresh start extended beyond his choice of producer. By the time recording sessions for the album began at New York’s Power Station studios in early December 1982, he had recruited an all-new backing band. “I wanted to have a little relief from the guys that I usually work with. I wanted to try people that I’d never worked with before, so that I couldn’t predict how they were going to play,” he told Musician magazine the following May. “They didn’t have much idea of how I worked in the studio. And as I hadn’t recorded in two years, it seemed perfectly natural ’round about now to try new people. Nile picked up most of the rest of the band for me: Omar Hakim from Weather Report; Carmine Rojas from Nona Hendryx’s band; Stevie [Ray Vaughan] and Nile played guitar, and that was the nucleus.”

The meticulous demos paid off. Let’s Dance was recorded remarkably quickly, in just 17 days, with vocal and instrumental overdubs added in January.

While Bowie had hired Rodgers to give him hits, even he may have been taken aback at the chart-busting success of the album’s first single and title track. Let’s Dance was released in March 1983 and became a worldwide smash, hitting No.1 on both sides of the Atlantic. Bowie and Rodgers had created an irresistible pop cocktail: the exhilarating nod to Twist And Shout of the introduction; the tough, snappy groove of the verses; and the soaring romance of the chorus.

It was a tough act to follow, but China Girl and Modern Romance very nearly managed it when the Let’s Dance album was released the following month, on 14 April. China Girl was a remake of a song that Bowie wrote with Iggy Pop for the ex-Stooge’s 1977 debut album, The Idiot, but where Iggy’s version was a raw, ramshackle rocker, Bowie and Rodgers’ arrangement gave the song a pumped-up makeover, revealing a pop gem in the process. Modern Love, meanwhile, was such an effervescent and peppy homage to rock’n’roll that the cynical lyric got lost on many of the listeners who sent it to No.6 in the US and No.2 in the UK.

Elsewhere, Without You was a Chic soul ballad in all but name, featuring both bassist Bernard Edwards and drummer Tony Thompson, with a beautifully delicate vocal from Bowie; the angular and unsettling Ricochet was the closest Bowie would come to emulating the art-rock of his late 70s albums; Criminal World saw him covering the little-known UK band Metro (and was especially notable for a searing guitar solo from Stevie Ray Vaughan); Cat People (Putting Out Fire) gave his Moroder collaboration a stomping rock makeover; and Shake It ended things on a Talking Heads-lite bit of funk-pop.

Let’s Dance topped charts worldwide and went on to sell over ten million copies, making it David Bowie’s biggest-selling album of all time. While his music had been winning countless hearts and minds for over a decade, now he’d gone mainstream – a change in direction that would have a major effect on his music over the coming years.

David Bowie wanted a hit, and he certainly got one.

Check our best David Bowie songs to find out which Let’s Dance track got us up and moving.