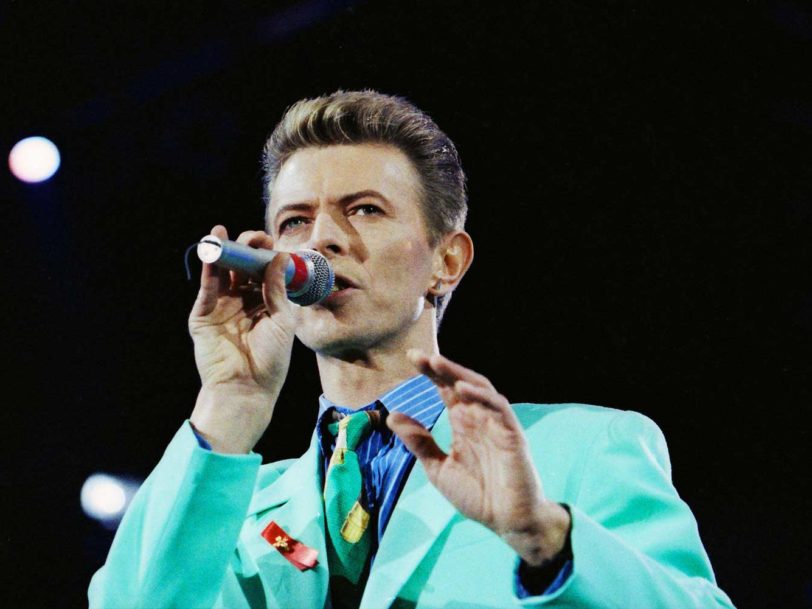 Under Pressure: How David Bowie Helped Put Queen Back On Top

The result of ‘a genius moment’ in the studio, Under Pressure found David Bowie helping Queen rise to the occasion.

Having opened the door to the 80s with his Scary Monsters (And Super Creeps) album, David Bowie seemed poised to shape the new decade as had the previous one: with more trailblazing manifestos which would rewrite the rock rulebook. However, as the New Romantics took his innovations and ran all the way into the pop mainstream with them, Bowie seemed content to take stock of his achievements. Entering a period in which he was more likely to appear on stage or in the movies than he was to be seen sculpting new sonic landscapes, the ever-prolific musician was – soundtrack work aside – about to leave his longest gap yet between albums; but first he would release a single that both showed the world he was still on top and helped Queen realise their first UK No.1 in six years. A rare instance of Bowie sharing the spotlight, Under Pressure emerged so perfectly formed in 1981 that it seemed an effortless example of two titans at the top of their game. But it wasn’t quite that simple…

“Somehow or other, we ended up writing this thing together”

Seeking some remove from the media glare, Bowie had relocated to Switzerland in 1976, making a home for himself in Blonay, just a stone’s throw away from Lake Geneva and a ten-mile drive north from Montreux. Having recorded the majority of his Lodger album in the town’s Mountain Studios, Bowie was no stranger to the facility when Queen bought it in 1979, just two months after Lodger’s release. With Queen settling there in the summer of 1981 to record what would become their Hot Space album, Bowie decided to pay his new neighbours a visit that July.

“I didn’t know Queen very well,” Bowie told BBC TV’s Top Of The Pops 2 almost two decades later. “I knew Roger [Taylor] the drummer quite well, but I didn’t really know Freddie [Mercury, singer]… I just popped in one day and, somehow or other, we ended up writing this thing together, as usually happens when musicians get together.”

“This thing” would be Under Pressure – one of a handful of collaborations Bowie and Queen put on tape. But though Mercury would recall that it “came about by chance, my dears… We began to dabble on something together, and it happened very spontaneously and very quickly indeed,” Queen had actually been struggling for a while with what became the basis of the song.

The broad chord structure was there but, apart from some chiming guitars from Brian May during the intro and a few snatches of vocal melodies from Mercury, the song they had been working on, then known as Feel Like, would bear little resemblance to its finished incarnation once Bowie got his hands on it – quite literally, in the case of Under Pressure’s iconic bass riff.

“It was a tense moment”

After deciding to use Feel Like as the starting point for an entirely new collaborative track, Brian May later said, “We all brought stuff to the table, and my contribution was a heavy riff in D which was lurking in my head. But what we got excited about was a riff which Deacy [John Deacon, bassist] began playing, six notes the same, then one note a fourth down. ‘Ding-ding-ding diddle in-ding,’ you might say.”

After returning from a dinner break, however, the bassist seemed to have forgotten what he’d come up with, leading Bowie to correct him. “That was a funny moment,” May told the Daily Mirror. “I can just see DB going over and putting his hand on John’s fretting hand and stopping him. It was also a tense moment because it could have gone either way. Deacy did not take kindly to being told what to do, especially by physical interferences while he was playing! But he was good natured, and it all went ahead.”

“It won’t sound like The Who when we’re finished!”

With Bowie now leading the charge, May laid a guitar riff on top (“David later was adamant it ought to be played on a 12-string guitar, so I overdubbed that later”) and got his heavy riff in there, too. “Cool, it sounds like The Who!” the guitarist remarked, leading Bowie to shoot back: “It won’t sound like The Who when we’re finished!”

With Bowie and the four members of Queen contributing everything from piano to synth lines, finger clicks and hand claps, the music took shape, its bassline’s slinky groove anchoring the song’s impassioned crescendo. But it still needed some lyrics – and a way for Bowie and Mercury to share the mic. As everyone – singers and non-singers alike – took turns in the vocal booth, experimenting with melodies and improvised lyrics, Bowie began to see the song’s final form. Though it’s here that memories diverge.

“David was having a genius moment”

“Freddie and I came up with our individual top-line melodies,” Bowie said in 2004, explaining that, “When you hear Freddie sing, that’s what he wrote, and when you hear me sing, that was mine. Then we worked on the lyrics together. I still cannot believe that we had the whole thing written and recorded in one evening flat. Quite a feat for what is actually a fairly complicated song.”

But while all agree that Under Pressure was completed within a 24-hour period, May remembers the song being finished off the following morning, and that Bowie “was back in the studio before anyone else, with a vision that began to tie everything together”.

“We all backed off and David put down a lyric which now focused on the ‘under pressure’ part of the existing lyric,” May continued. “It was unusual for us to relinquish control like that, but really David was having a genius moment – because that is a very telling lyric.”

Wherever the truth lies – and it’s generally accepted that Mercury’s scat singing parts remained intact from his initial vocal experiments – it’s undeniable that Under Pressure inspired career-best vocals from both Bowie and Mercury, who trade lines and wind their voices around each other with an intensity befitting a song which deals with the stresses of modern life and the perils of living in a society that prioritises individual wealth at the cost of empathy with others.

“Everything David did was legendary”

Mixed during another intense session – 18 hours on, portentously, 11 September 1981 – Under Pressure was released on 26 October and sailed to the top of the UK charts with ease while also hitting No.1 in the Netherlands, Canada and Argentina, and going Top 10 almost everywhere else. Providing the closing track to Queen’s Hot Space album, it also hinted at the post-disco pop sound Bowie would fully explore with Chic’s Nile Rodgers on 1983’s Let’s Dance album.

Almost a decade later, Vanilla Ice took Under Pressure’s bassline to the top of the charts on both sides of the Atlantic when he sampled it for his one-off hit, Ice Ice Baby, resulting in not only the first hip-hop song to top the Billboard Hot 100, but also in one of the most famous lawsuits in music history. After Freddie Mercury died the following year, Bowie joined Queen on stage at the Freddie Mercury Tribute Concert For AIDS Awareness for his first ever live rendition of the song, reminding everyone where Under Pressure came from. “David’s duet with Annie Lennox that night is legendary,” Brian May observed. “But pretty much everything David did was legendary.”

“I’m very pleased I did it”

Newly inspired to add the song to his setlists at various points throughout the rest of his career, Bowie would enlist his latter-day bassist Gail Ann Dorsey to take on Mercury’s parts in the knowledge that she was more than capable of handling bass-playing duties at the same time. In 2011, three decades after the song’s release, a Rolling Stone readers’ poll named Under Pressure the second greatest musical collaboration in history.

“You had four very precocious boys and David, who was precocious enough for all of us,” Brian May later told Mojo. “It’s a great song because of David and its lyrical content.” Elsewhere, he asserted, “I’m certainly proud to have worked with him.”

For Bowie, the feeling was mutual: “I’m very pleased I did it,” he reflected in 1999, adding, with some understatement, “It was nice to be part of that little bit of history.”

Check out our best David Bowie songs to find out where ‘Under Pressure’ ranks.