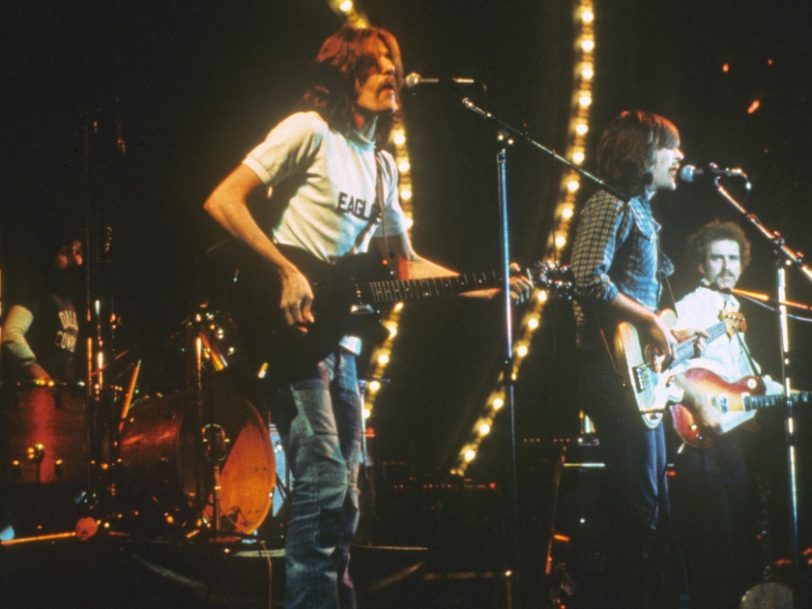 While Eagles would go on to become one of the biggest bands of all-time – the collection Their Greatest Hits (1971-1975) is the best-selling album in the US of all time, with 38 million copies sold, and the Hotel California album isn’t far behind – they got their initial break as Linda Ronstadt’s backing band. After discovering their intuitive musicianship, the bandmates formed their own group, with Eagles’ debut album revealing the trademark sound that would define West Coast country-rock.

“Our main was to write good, memorable songs”

Rhythm guitarist and singer Glenn Frey and drummer Don Henley had met back in 1970. The two musicians had each spent their early years playing in bands and were both signed to the Los Angeles-based label Amos Records – Frey as part of the duo Longbranch Pennywhistle (with JD Souther) and Henley as a member of folk-rockers Shiloh.

Linda Ronstadt’s then manager, John Boylan, had been tasked with forming a backing band for the country singer’s tour in support of her 1970 album, Silk Purse. He asked Frey to join the group, and Frey in turn suggested Henley. Future Eagles Randy Meisner (bassist) and Bernie Leadon (guitar, banjo, mandolin, pedal steel, dobro) also joined Ronstadt’s band at different points of the tour. Owing to changes in personnel throughout, however, the four musicians only once played together behind Ronstadt – at a gig in Disneyland – though they did all appear at various points on Ronstadt’s self-titled album, which followed Silk Purse in 1972.

“We got a cheap rehearsal place and started woodshedding”

When Frey and Henley realised the extent of their musical connection, they decided to form their own band. Ronstadt and Boylan suggested the pair recruit Leadon, who was invited to a practice studio to test the waters. Meisner was subsequently added to the line-up and Eagles were formed. Talking to Rolling Stone in 2016, Henley underlined how serious the group were from the outset, “We had four singers, and though we weren’t the first band to feature a line-up like that, we wanted to make use of it in unique ways… Our main goal, at the beginning and throughout our career, was to write good, memorable songs, make albums that had little or no filler, that were consistent from beginning to end in terms of songwriting and production. We also wanted to be a good live act. We wanted to be the whole package. We didn’t always meet our goals, but we tried.”

The ambitious four-piece set to work, as Leadon told Uncut in 2022: “We got a funky, cheap rehearsal place near the Hollywood Bowl and started woodshedding.” Once the group had written some original material, Boylan suggested they contact David Geffen, whose starry management roster included Joni Mitchell and Crosby, Stills, Nash & Young, and who had recently founded Asylum Records. Geffen saw the band’s potential and had the drive to push them forwards, as Leadon recalled: “We were Asylum’s first band… He was ready to launch, had all the skills. He said, ‘Don’t make trouble, and hold on!’”

“He knew that you had to have a unique sound”

Geffen sent Eagles to play an intense season of gigs in Colorado ski resorts. Playing up to four sets a night, the intention was to hone the newly-formed group’s live performances and give them a chance to write more songs. The label arranged for star producer Glyn Johns (who’d recently helmed albums by The Beatles, The Rolling Stones and Faces) to be flown up to see them play, but it didn’t go well. “It was very badly attended and the sound was terrible,” Johns told Uncut. “The material wasn’t that impressive. It was a mess.”

Eagles returned to LA, where they rehearsed and wrote new material, and Geffen convinced Johns to give them another chance. The producer visited a practice session but remained unconvinced until the group gathered around an acoustic guitar to sing Meisner’s Take The Devil. Johns remembered, “It completely blew me away. Once I copped their four-part harmony mix, it opened my eyes to the possibilities.”

With Johns on board, it was decided that the sessions for Eagles’ self-titled debut album – the first offering from a group synonymous with the sun-soaked, laidback LA country-rock sound – would take place in the unlikely surroundings of London’s Olympic Studios.

“The vocal thing would be the centrepiece”

Despite struggling to acclimatise to a cold British winter, Eagles knuckled down and finished recording the majority of their debut album in just three weeks. One song, Jackson Browne’s Nightingale, was added after it was felt that another Don Henley lead vocal was required. Throughout the sessions, Frey and Henley clashed with Johns over the production, with the principal Eagles looking for a more rough-hewn, rock’n’roll sound while Johns insisted on capturing a mellow, harmony-laden country-rock feel. The producer won out, and Leadon later reflected on Johns’ influence on what would become Eagles’ trademark sound: “He knew that you had to have a unique sound. He had already decided that the vocal thing would be the centrepiece.”

Johns’ instincts proved correct. Eagles’ harmonies set them apart from the moment they kicked in on the chorus of the opening track, the Glenn Frey- and Jackson Browne co-write, Take It Easy. Immediately taking its place among the best Eagles songs, here was a tune precision-tooled for radio play, a welcoming and laidback introduction to the band which reached No.12 on the Billboard chart when it was released as a single.

Henley’s potential as a songwriter was underlined by Witchy Woman, his co-write with Leadon, and a simmering blues-rocker that nodded to the contemporary trend for dabbling in the occult. Frey’s Most Of Us Are Sad was another highlight, a slow-tempo weepie with an empathetic lead vocal from Meisner. Leadon also contributed the mellifluous country of Train Leaves Here This Morning (a co-write with former Byrd Gene Clark) and the bluegrass-inspired Earlybird, which he wrote with Meisner.

Released on 1 June 1972, Eagles’ self-titled debut album was a success right off the bat. Three hit singles – Take It Easy, Witchy Woman and the Jack Tempchin song Peaceful Easy Feeling – ruled the airwaves and spurred the record on to No.22 in the US. Greater success was to come, with releases such as Desperado, One Of These Nights and Hotel California all taking their places among the best Eagles albums, but this record laid the foundation on which it would be built.