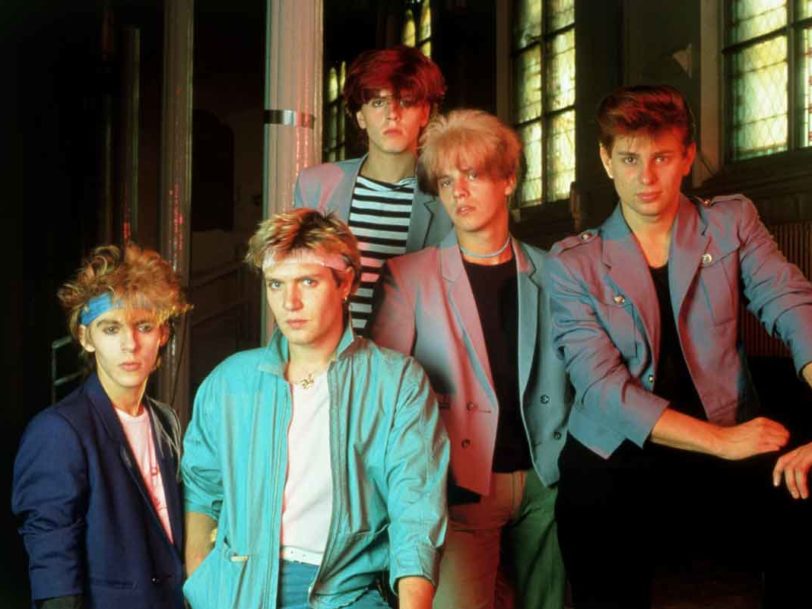 How Duran Duran’s Debut Album Touched Down On Planet Earth

Long before Duranmania swept the globe following the success of Rio, the Birmingham pop group Duran Duran provided many clues that there was more to them than meets the eye. Released in 1981, the band’s self-titled debut album saw them offer up a surprisingly experimental fusion of brooding synth instrumentals and dancefloor-ready pop anthems. Though overshadowed by their later success, Duran Duran’s first album established a sound that placed them at the forefront of the New Romantic movement.

“They wanted to keep it funky and danceable”

Founded by keyboardist Nick Rhodes and then-guitarist John Taylor while they were working at Birmingham’s Rum Runner nightclub, Duran Duran set out to fuse the punky attitude of Sex Pistols with the discofied grooves of Chic. However, it would take many line-up changes before they were ready to conquer the world. Lead vocals were initially supplied by Stephen Duffy, with Simon Colley on bass, before both of them left and Andy Wickett became the group’s new singer.

With the addition of Roger Taylor on drums, Duran Duran ditched the drum machines and, with John Taylor switching to bass, their sound started to take shape. Responding to an ad in Melody Maker, guitarist Andy Taylor became a vital new addition – his traditional rock style lent a raw, edgy feel to the group’s more synthesised arrangements. “They wanted the metal sound of the guitar,” Andy Taylor remembers. “but they wanted to keep it funky and danceable and also wanted [Brian] Eno in the background.”

Taking their name from Dr Durand Durand, the antagonist in the 1968 sci-fi film Barbarella, this early iteration of the group rehearsed regularly at the Rum Runner, recording numerous early demos inspired by Kraftwerk, Roxy Music and David Bowie’s Berlin period. The band hit another setback when Wickett quit and they were forced to hunt for a new singer; however, when Simon Le Bon arrived at his audition with a book of poems, it seemed like destiny. Not only did Le Bon boast a muscular voice, but his lyrical ambitions became the final piece in the puzzle. At last, the band were poised for success.

“There’s something very romantic about astronauts”

In December 1980, Duran Duran signed a record deal thanks to A&R man Dave Ambrose, the man who had discovered Sex Pistols. Recruiting producer Colin Thurston (The Human League, Iggy Pop), the group had hoped to conjure some of The Beatles’ magic by recording their album at Abbey Road Studios, but when Thurston struggled to capture a drum sound they liked, they decamped to Red Bus Studios in London and Chipping Norton Studios in Oxfordshire. Spookily enough, the sessions were momentarily halted by the assassination of Beatles legend John Lennon that same month.

Duran Duran’s debut single, Planet Earth, was released on 2 February 1981 and made an immediate impact, peaking at No.12 in the UK. “There’s something very romantic about astronauts,” Nick Rhodes declared, placing the song in the same otherworldly lineage as David Bowie’s Space Oddity. With its zig-zagging guitar lines, Planet Earth’s lyrics playfully made reference to synth-pop fashion sensibilities (“Like some New Romantic looking for the TV sound”), anointing Duran Duran as the new gentry of the music scene.

“I just had this idea of what it would be like if you were coming in and seeing this planet for the first time,” Simon Le Bon said, touching upon the song’s sci-fi-inspired cosmic textures. For all intents and purposes, however, the band’s fashion style owed more to glam than sitting in a tin can. Nevertheless, by launching the group’s commercial fortunes, Planet Earth was the perfect apéritif to build anticipation for their debut album. Heralded as “the next big thing” along with other acts like Spandau Ballet, Duran Duran were ready to explode into public consciousness.

Upon the urging of their record label, Duran Duran agreed to release Careless Memories as their second single, though, in private, they all believed Girls On Film would have been a better choice. Nick Rhodes felt Careless Memories was “a lot darker and tougher-sounding” than Girls On Film, which could have been why it stalled at No.37 in the UK, temporarily derailing the band’s momentum. However, with its moody and atmospheric post-punk beat, Careless Memories proved Duran Duran were more than just dandified pop pin-ups; here they were harbouring musical ambitions as bold as The Cure’s.

If anything, Careless Memories hinted at the group’s darker creative impulses, with Simon Le Bon singing with a despair that wouldn’t have been out of place on a Joy Division record (“I walk out into the sun, I try to find a new day/But the whole place just screams in my eyes”). When Duran Duran’s self-titled debut album was finally released, on 15 June 1981, it was clear this was no accident – the group’s sound owed as much to post-punk as it did to the frilly synth-pop beloved by London’s Blitz Kids.

“We want to be the band to dance to when the bomb drops,” Simon Le Bon said, highlighting their debut album’s apocalyptic tone. For that, look no further than Sound Of Thunder, a song imbued with Cold War paranoia and based on a poem Le Bon wrote about a man who starts World War III. Elsewhere, there’s Night Boat, a nocturnal spookfest inspired by Kraftwerk (“Fog in my mind darkens my eyes/Silently streaming for a distant sound”). Later, the song would be matched with a mini horror film in which the band get ambushed by zombies.

Less than a month after their debut album’s release, Duran Duran got their way and released Girls On Film as their third single. Beginning with the clicking shutters of a Nikon camera, the song was written as a critique of the mistreatment of fashion models and became the band’s most successful hit to date, sweeping in at No.5 in the UK. “It was a feminist statement, for sure,” Le Bon said. “It’s about the exploitation of women. And you had all these little girls singing along with it in their bedrooms.”

Despite being released prior to the launch of MTV, the promo video for Girls On Film also provided early evidence for the power of the music video. Kevin Godley, one half of Godley & Crème – who, after leaving 10cc, had re-established themselves as a directorial duo – claimed the band wanted to “do something that’s kind of provocative” and to “make it beautiful, make it interesting”. The finished product centred around female models performing eroticised vignettes in a wrestling ring.

As tabloid controversy erupted around the idea of semi-naked girls grappling their way into the dreams of pubescent teenage boys, Kevin Godley felt the video did the trick. Establishing Girls On Film as one of the best Duran Duran songs of all time, it also helped the group reach a higher level of notoriety. “A little bit of daring in the early days always bears fruit, and that’s precisely what happened here,” Godley told Songfacts.

“It’s one of the most honest albums ever”

With the oncoming arrival of MTV, Duran Duran’s knack for pairing pop melodies with powerful music videos went on to develop in leaps and bounds, but it all started with Girls On Film. By setting the group on the road to Rio, their self-titled debut album deserves most of the credit for embodying the New Romantic era and blending synth-pop innovation with the dynamism of post-punk. Without the success of early hits such as Planet Earth, Duran Duran’s rise to fame in the US would hardly have been imaginable.

It’s also worth noting that the record spent longer on the UK album charts than Rio – more than two years, in fact – eventually going platinum by the end of 1982. And yet, as much as Duran Duran came to be regarded as Smash Hits pin-ups proffering synth-pop confections, the jittery dance-punk basslines (Anyone Out There) and gloomy synth instrumentals (Tel Aviv) that helped characterise their debut album prove there was always more to the group than that.

“It’s one of the most honest albums ever, in my opinion,” Nick Rhodes would later say. “There wasn’t a thing on that album that was contrived.” Sure enough, from its ominous synth-led soundscapes to its spiky art-punk energy, Duran Duran’s debut album set the scene for their ascendancy to pop’s top table, giving them all the confidence they needed to take over MTV and win over US audiences. Any New Romantic looking for the TV sound wouldn’t have taken long to find it.

Check out our best Duran Duran songs, and find out which of their debut album tracks made the cut.