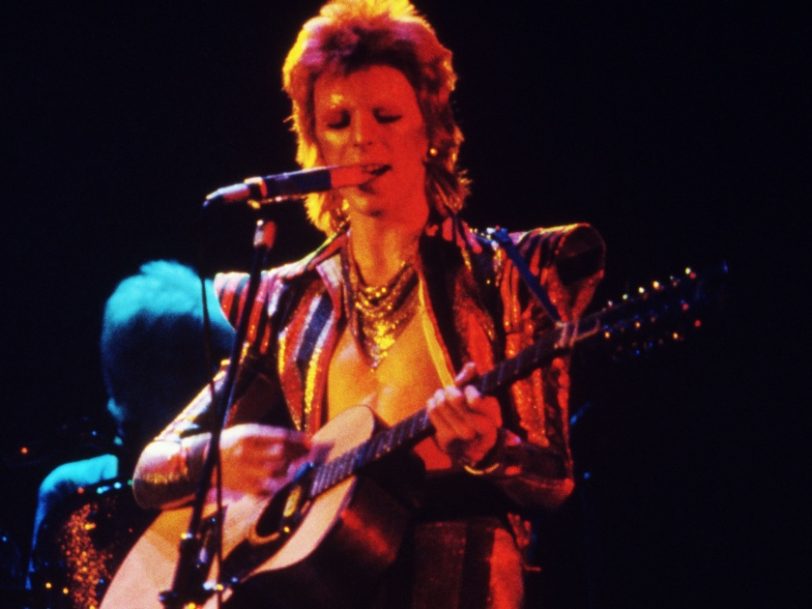 With an earworm melody and an unforgettable TV performance, Starman became the song that brought David Bowie’s fame.

David Bowie had scored a hit single before he released Starman in the spring of 1972, but that had been three years earlier. Yet despite having gone to No.5 with Space Oddity – and subsequently issuing three albums, among them the career landmark Hunky Dory – little else had troubled the charts. However, Starman was tailor-made to relaunch Bowie’s career ahead of the release of his era-defining album The Rise And Fall Of Ziggy Stardust And The Spiders From Mars, even if it was only penned as a last-minute addition to replace a cover of an old Chuck Berry tune initially shuffled into the album’s tracklist.

Listen to the best of David Bowie here.

“It was at that point that the Ziggy concept finally happened”

Moving at his typically fast pace, Bowie had more or less finished recording the Ziggy Stardust album by the end of the previous year, before Hunky Dory had even been released. But while he waited for the industry cogs to turn and a space to be made for a record that would do more than any other to kick-start the 70s, his then record label, RCA, sent word back: the album had promise, but it didn’t have a single on it. “So David went off and wrote what he called Somewhere Over The Rainbow. His Starman song,” Robin Mayhew, Bowie’s soundman for live shows, told Paul Trynka for the Bowie biography that would take its name from this new song.

“It was at that point that the [Ziggy] concept finally happened,” the album’s producer, Ken Scott, added. “It was the perfect single.”

“We were already singing it, having only heard it once”

Looking to replace a throwback cover of Chuck Berry’s Round And Round, Bowie penned a prescient tune that welded showbiz glamour to zeitgeist-channelling glitter, resulting in a singalong earworm that felt immediately recognisable. If he’d fashioned the Hunky Dory standout Life On Mars? after Frank Sinatra’s My Way, here Bowie pulled from a variety of sources in order to write a song that was unmistakably his own, its patchwork of influences fitting as snugly as the quilted jumpsuits he’d begun wearing in the guise of his Ziggy Stardust alter ego.

Lifting the morse-code-like guitar intro from The Supremes’ 1966 hit You Keep Me Hangin’ On and dropping it into his pre-chorus, and sashaying up to the mic with all the glam-era magnetism of recent T.Rex, Bowie ensured that Starman would land on target. As he had done with Life On Mars?, guitarist Mick Ronson, creative foil in Bowie’s backing group, The Spiders From Mars, created a string arrangement that evoked vintage Hollywood, but it was the octave jump in the chorus – “There’s a star-man waiting in the sky” – which lifted the song to another level. A direct nod to, as Robin Mayhew observed, Judy Garland’s signature song, Somewhere Over The Rainbow, the melody ensured that Starman sounded timeless even as it came to ring in the future – both for Bowie and for a generation of teenagers hungry for a rock messiah of their own.

“It was an obvious hit single!” Spiders drummer Woody Woodmansey told The Quietus years later. “I think Mick and I went out in the car after David played it for us the first time, and we were already singing it, having only heard it once.”

Recorded with The Spiders From Mars on 4 February 1972, during the same session that spawned its B-side, the altogether rockier Suffragette City, Starman was released in the UK a little over two months later, on 28 April (a US release would follow on 20 May). But if its strummed acoustic intro offered a gentle reminder that this was the same artist who’d already taken off with Space Oddity, one listen to Starman made it clear that Bowie’s sci-fi-fixated songwriting had by now entered an entirely different orbit.

“All this about Ziggy being Starman is bullshit”

A concept album by reputation, if not in actuality, The Rise And Fall Of Ziggy Stardust And The Spiders From Mars gave obsessive Bowie fans – and there was no other type in the early 70s – enough to pore over to ensure that that the Ziggy Stardust character would dwarf even his creator’s expectations – and threaten to consume his psyche in the process. But while only a few of the album’s songs directly addressed the storyline of an extraterrestrial rock messiah come to save Earth from destruction, Bowie initially intended for Starman to have a wider message. It could, he said at the time of its release, have been taken “at the immediate level of, ‘There’s a Starman in the Sky saying Boogie Children,’ but the theme is that the idea of things in the sky is really quite human and real, and we should be a bit happier about the prospect of meeting people.”

Two years later, with Ziggy Stardust having taken on a life of his own, and Bowie’s natural theatricality leading him to begin work on a Ziggy-themed musical, the song was repositioned as a tune that Ziggy himself had written to alert humans to the arrival of a race of starmen “called the infinites… black-hole jumpers… who will be coming down to save the Earth”, as Bowie put it in a conversation with William S Burroughs, conducted for Rolling Stone magazine in 1974. Somewhat echoing his own complicated relationship with Ziggy, Bowie added, “Now Ziggy starts to believe in all this himself and thinks himself a prophet of the future starman. He takes himself up to incredible spiritual heights and is kept alive by his disciples… It is a science-fiction fantasy of today.”

But while producer Ken Scott would write in his memoir, Abbey Road To Ziggy Stardust, “All this about Ziggy being Starman is bullshit. It was a song that was just put in as a single at the last minute at the record label’s insistence,” the song would inspire Bowie’s growing legion of fans to conflate the star with the Starman, not least when he seemed to directly call upon viewers at home during an epochal TV appearance that would cement his legend overnight.

Despite its interstellar inspiration, Starman’s lyrics had a conversational intimacy that felt as though they were letting listeners in on a secret. Riding in on a late-night radio broadcast, a mysterious singer lays down some “hazy cosmic jive” that inspires the kind of excited phone calls teenagers around the world would soon have about Bowie himself. With just a frisson of rebellion (“If we can sparkle he may land tonight/Don’t tell your poppa or he’ll get us locked up in fright”), Bowie perfectly set the stage to beam himself into unsuspecting viewers’ homes across the UK.

Ready to “blow our minds”, Bowie took to the BBC stage on 5 July 1972 to record his Top Of The Pops performance of Starman. Broadcast the following evening, it was accompanied by the sound of dinnertime cutlery dropping to the table in every household across the country as Bowie, in full make-up, burnt-orange mullet and multicoloured-jumpsuit Ziggy regalia, casually but oh-so-knowingly draped his arm around Mick Ronson while he sang the song’s first chorus. When he audaciously pointed and waggled his finger at the camera as he “picked on you-oo-oo”, he might as well have reached into the souls of every schoolkid waiting for their life to start, and tickled them into euphoria. Future Smiths stars Morrissey and Johnny Marr were watching, as were a host of New Romantic musicians waiting to come of age, Spandau Ballet’s Gary Kemp and members of Duran Duran among them. A 12-year-old Ian McCulloch, later to become Echo And The Bunnymen’s frontman, was immediately “hooked”. Talking to Paul Trynka, he recalled: “It connected with me in a way that no other record ever had. I was impressionable and naïve – and at that moment I knew exactly what I wanted to do.”

Marc Bolan may have taken glam into the charts with T.Rex, but with his Top Of The Pops performance – what Trynka called “his bid for immortality” – Bowie, arriving just before the glam-rock clock struck midnight, pulled all its threads together for a watershed moment in pop culture: here were LGBTQ+ sensibilities openly displayed on prime-time British TV, wrapped up in a character-play that opened kids’ minds to the possibility of constructing their own identities however they pleased. If, sonically-speaking, Starman didn’t quite sound like the future, it set in motion decades of creative explorations that are still being played out today.

Bowie would acknowledge some of Starman’s source material in live performances of the era, nodding to T.Rex’s earlier hit Get It On when he sang “Some cat was layin’ down some get-it-on rock’n’roll”, and, while touring the Ziggy Stardust album in August 1972, singing “There’s a starman/Over the rainbow/Where I fly” during choruses.

However, as a marker of Bowie’s place among the most influential musicians of all time, Starman was all his. Still standing as one of the best David Bowie songs, it hit No.10 in the UK and helped The Rise And Fall Of Ziggy Stardust And The Spiders From Mars soar to No.5 and kick-start a phenomenal run of game-changing albums that would go on to shape the 70s, Aladdin Sane, Station To Station and Low among them.

Bowie may have called Starman “a science-fiction fantasy of today”, but it became far more than that. As Bowie scholar Nicholas Pegg put it, in The Complete David Bowie, “this is less a science-fiction story than a self-aggrandizing announcement that there’s a new star in town… Bowie exploits Starman not just as a comeback hit, but as the vessel by which he reveals himself as a reconstructed icon.”