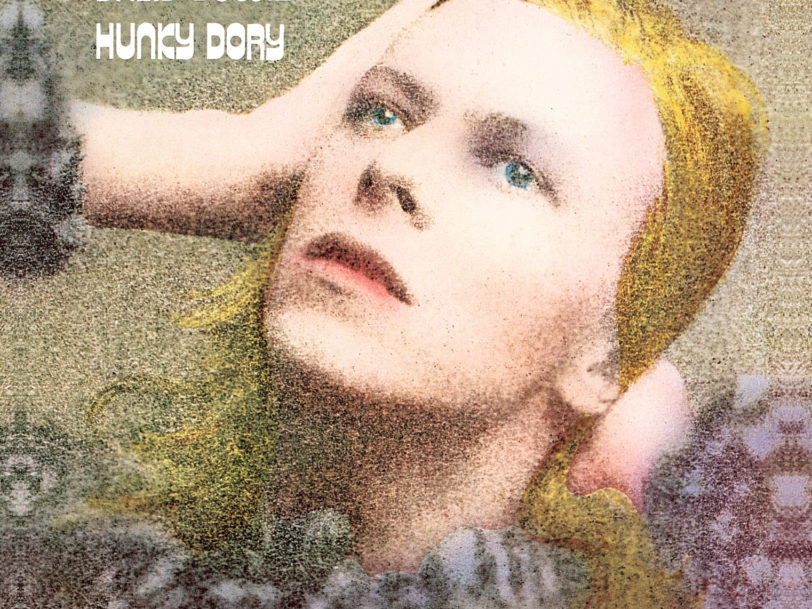 Three albums and an array of singles into his career, David Bowie was still trying to find himself. He’d scored a No.5 hit with Space Oddity in 1969 but, by 1971, without having released anything else with as culturally significant, some onlookers were beginning to think of him as a one-hit wonder. He’d tried mod-pop, folk-rock and even proto-heavy metal, but while he wasn’t lacking for ambition or talent, he’d yet to gain a true foothold in the music industry. And then, in a burst of creativity that captured both the chaos in his head and the ambitions he continued to harbour, Bowie penned not only the songs that would form Hunky Dory, the album on which he truly began to find his voice, but also many of the songs that would shape its earth-shattering follow-up, The Rise And Fall Of Ziggy Stardust And The Spiders From Mars. In doing so, he would go from determined hopeful to what The New York Times called “the most intellectually brilliant man yet to choose the long-playing album as his medium of expression”.

“I changed my way of writing”

Bowie’s first serious exposure to the US would play no small part in his prolific outpouring of new songs. Returning to the UK after a short promotional tour in support of The Man Who Sold The World, which had been given a Stateside release in November 1970, he discovered a “newfound enthusiasm for this new continent that had been opened up to me” and embraced “a real outside situation” that “changed my way of writing and the way I look at things”.

January 1971 had already seen him pen the first Hunky Dory song, Oh! You Pretty Things, which he initially gave to Peter Noone, former frontman of 60s pop hitmakers Herman’s Hermits. Released as Noone’s first solo single, the song peaked at No.12, suggesting that Bowie was onto something that could return him to commercial prominence. Other material, written for a short-lived side project called Arnold Corns – a kind of dress rehearsal for his Ziggy Stardust-era group, The Spiders From Mars – also found him making tentative steps towards becoming a svengali-like figure. But, as Hunky Dory would ultimately show, Bowie was beginning to crystallise a unique vision best expressed by him alone.

“I find freedom in my eccentricity”

Straddling music-hall, classic singer-songwriter pop and a brief detour into the harder sounds he would perfect on Ziggy Stardust, Hunky Dory is as stylistically diverse as it is thematically sprawling. Threads of high-camp theatrics weave their way through the piano romps of Oh! You Pretty Things and Fill Your Heart (the album’s only cover), while, on the likes of Life On Mars?, aided by Rick Wakeman’s majestic piano and guitarist Mick Ronson’s soaring string arrangements, Bowie proved he could work up sumptuous studio creations as comfortably as he could turn out destabilising constructs such as album closer The Bewlay Brothers, whose abstract sonic collage underscored the song’s fractured lyrics.

Thematically, Hunky Dory also sowed the seeds for much of the gender role play Bowie would blaze a trail for throughout the 70s: the “pretty things” of the album’s second track, “driving your mamas and papas insane” are distant cousins of the “hot tramp” in Bowie’s glam kiss-off, Rebel Rebel. Elsewhere, Queen Bitch revels in its dismissive takedown of a New York drag queen “… in her satin and tat/In her frock coat and bipperty-bopperty hat”, before Bowie declares, “Oh God, I could do better than that.” In a little over two years’ time, donning full make-up and kabuki-inspired stage costumes, Bowie would prove as good as his word.

Counter to the song’s lyrics, Queen Bitch’s muscular arrangement, featuring the future Spiders From Mars, Mick Ronson, Trevor Bolder (bass) and Mick Woodmansey (drums), paid tribute to The Velvet Underground’s Lou Reed – himself no stranger to New York’s queer culture, and a man who had fast become an icon for Bowie; as had Andy Warhol, who, then running his Factory empire out of downtown Manhattan, earned his own nod on Hunky Dory. Warhol famously left the room when Bowie took the opportunity to play him his off-kilter folk-rock tribute (for Bowie’s part, meeting Warhol had been a disappointment: the pop art pioneer had “nothing to say at all, absolutely nothing”), but the song arguably offered more insight into Bowie than it did its subject: having cycled through several styles before somewhat amalgamating the best of their disparate pieces for Hunky Dory, Bowie, like Warhol, was beginning to envision himself as a living work of art.

“The album got a lot out of my system”

Recorded in London’s Trident Studios throughout the summer of 1971, just days after Bowie had performed some of its songs at the second Glastonbury Festival, Hunky Dory quickly suggested he was hitting a new level. Demoed largely on piano, as opposed to the guitar Bowie had more often used to sketch out his ideas, the songs may arguably have been a step back in terms of their folkier leanings, but they offered clear evidence of his developing songwriting skills – whether he was addressing Nietzschean philosophies of the Superman (Oh! You Pretty Things, Quicksand), expressing lullaby-like fantasies of domestic life as a new father (Kooks) or deconstructing the inner workings of his artistic process (the artistic manifesto of Changes; Quicksand’s battle with creative anxieties). “When we were sitting there listening to those demos, this lightbulb went on,” Hunky Dory’s co-producer, Ken Scott, later recalled. “I thought, Bloody hell! This is for real!”

“The album got a lot out of my system, a lot of the schizophrenia,” Bowie later revealed. “I cannot breathe in the atmosphere of convention… I find freedom only in the realms of my own eccentricity.” If album closer The Bewlay Brothers remains perhaps Bowie’s most impenetrable, unsettling expression of that eccentricity (it was, he variously claimed, “another vaguely anecdotal piece about my feelings about myself and my brother, or my other doppelganger”; or meaningless words written “for the American market. They like that kind of thing”), then opener Changes was a clear statement of intent: in turning to “face the strange” and become “a different man”, it seemingly marks the moment where Bowie realised he could undergo countless reinventions in his continued search to best express himself. In doing so, he gave a whole new generation – “these children that you spit on” – an anthem that encouraged them to do the same.

If Bowie was yet to write himself into fame, as he would with his most iconic change of all – the Ziggy Stardust character that would, in 1972, cement his place in rock history – Life On Mars? found him projecting his ambition on a widescreen ballad that, with its nod to Frank Sinatra’s My Way, and Andy Warhol’s cinema verité films doubtless in mind, imbued normal lives with silver-screen grandeur. (Visions of old Hollywood bled into the Hunky Dory album cover, with Bowie arriving at the photo shoot with a book containing pictures of Marlene Dietrich for inspiration. Shot in black-and-white, and then coloured like an Andy Warhol screen print, the Hunky Dory artwork remains one of David Bowie’s best album covers.

No less enigmatic than The Bewlay Brothers, something about Life On Mars?’s lyrics clicked with a slowly growing fanbase for whom Bowie was increasingly beginning to seem like a prophet from another world. Routinely – and rightly – hailed as one of Bowie’s best songs, it was overlooked for single release until he went stratospheric with The Rise And Fall Of Stardust And The Spiders From Mars. Issued – along with a Ziggy-era video – in June 1973, Life On Mars? went Top 5 in the UK, staking its claim as the hands-down highlight on Bowie’s first masterpiece.

Not that initial album sales reflected that. Released on 17 December 1971, Bowie’s then label, RCA, were reluctant to promote Hunky Dory too heavily. They agreed to release Changes as a single, but, with Bowie already back in the studio, recording more songs written during his creative spurt at the start of the year, word of an impending radical reinvention had the label spooked.

Critics, however, praised the album – and its creator, who, after almost a decade in the music industry, had seemingly found his voice. Calling Hunky Dory “a breath of fresh air compared to the usual mainstream rock”, NME declared, “It’s very possible that this will be the most important album from an emerging artist in 1971, because he’s not following trends – he’s setting them.”

“Hunky Dory gave me a groundswell”

In the US, Billboard heard an album “loaded with the kind of Top 40 and FM appeal that should break him through big on the charts”, but it took a while for that prediction to come true. Without RCA’s support, Hunky Dory initially failed to chart at all. Only after the release of The Rise And Fall Of Ziggy Stardust And The Spiders From Mars did its performance improve – so much so that it soared to No.3 in the UK, beating its successor’s chart peak by two places.

By that point, however, Bowie was on another planet altogether. But he never forgot how Hunky Dory had helped him get there. “Hunky Dory gave me a fabulous groundswell,” he later recalled. “I guess it provided me, for the first time in my life, with an actual audience – I mean, people actually coming up to me and saying, ‘Good album, good songs.’ That hadn’t happened to me before.’”

From here on out, it would only keep on happening.