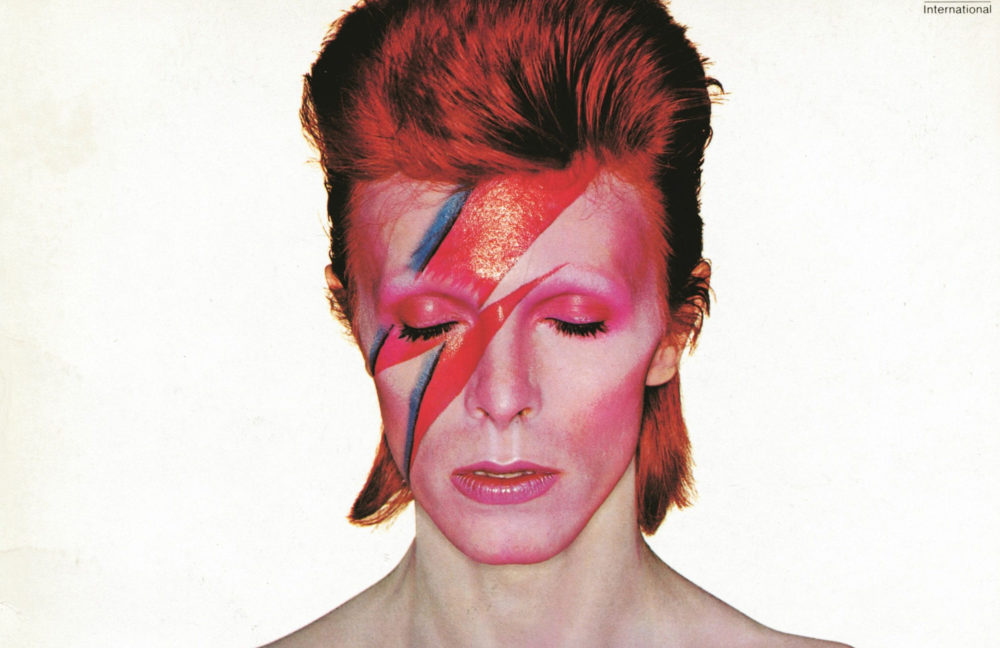 Released on the back of his commercial breakthrough, The Rise And Fall Of Ziggy Stardust And The Spiders From Mars, David Bowie’s sixth album, Aladdin Sane, rewarded him with his first UK No.1, introduced him to the US Top 20 and ensured his star remained very much in the ascendant.

“Aladdin Sane was my idea of rock’n’roll America”

Initially viewed as an inferior follow-up to the stellar Ziggy Stardust, but now regarded as a landmark release, this adventurous April 1973 opus found Bowie adopting another new persona. Though broadly an extension of the messianic Ziggy Stardust, Aladdin Sane (a pun on the term “a lad insane”) was notably more dystopian in his outlook. According to Bowie biographer David Buckley, Aladdin Sane was a “schizoid amalgamation” – as reflected in Brian Duffy’s iconic album cover photo, on which a vivid red-and-blue lightning streak splits Bowie’s face in two, mirroring both his new persona and his contradictory feelings about his newly-acquired stardom in the US.

“Aladdin Sane was my idea of rock’n’roll America,” Bowie later reflected. “Here I was on this great tour circuit, not enjoying it very much. So inevitably my writing reflected that – this kind of schizophrenia that I was going through. Wanting to be up on stage performing my songs, but on the other hand not really wanting to be on those buses with all those strange people. Being basically a quiet person, it was hard to come to terms. So Aladdin Sane was split down the middle.”

The US – in all its decadent, neon-lit glory – was writ large upon the album. Indeed, the panoramic scenery Bowie absorbed on the long Greyhound bus rides between shows on the Ziggy Stardust tour provoked him to write several of Aladdin Sane’s key tracks. The otherworldly desert landscapes of Arizona inspired the evocative, doo-wop ballad Drive-In-Saturday, while the album’s strutting lead single, The Jean Genie, first materialised during a journey from Cleveland, Ohio, to Memphis, Tennessee. During this lengthy drive, lead guitarist Mick Ronson hit upon a riff inspired by The Yardbirds’ take on Bo Diddley’s I’m A Man, and Bowie neatly married it to a lyric reputedly inspired by actress and Andy Warhol acolyte Cyrinda Fox (“Talking ’bout Monroe and walkin’ on snow white/New York’s a go-go and everything tastes right”), giving the song a chorus acquired through an imaginative marriage of Jean Genet’s name and Eddie Cochran’s 1958 single Jeanie Jeanie Jeanie.

Such was the frantic pace of Bowie and The Spiders From Mars’ Ziggy Stardust tour during the autumn of 1972 that both songs were recorded in New York during hard-won downtime. The Jean Genie was promoted with a striking, Mick Rock-directed film clip shot in San Francisco and featuring Cyrinda Fox, and it shot to No. 2 in the UK chart early in 1973 – just as Bowie and The Spiders hooked up with Ziggy Stardust producer Ken Scott to record the bulk of Aladdin Sane before returning to the US for further dates that February.

“Bowie is the best producer I ever worked with”

Though undeniably great, Aladdin Sane’s music was every bit as schizophrenic as Bowie’s new character. The Jean Genie and a manic cover of The Rolling Stones’ Let’s Spend The Night Together were already established live favourites, while the equally raunchy glam-rock offerings Watch That Man and Cracked Actor, along with the Bo Diddley-esque hoodoo of Panic In Detroit, afforded lead guitarist Mick Ronson ample opportunity to shine.

A New Yorker whose unique style was born from studying with jazz heavyweights such as Bill Evans and blind bebop legend Lennie Tristano, Garson would eventually become Bowie’s longest-serving band member. Their association began when Bowie recruited him for the US Ziggy Stardust dates on the strength of his work on Annette Peacock’s avant-jazz opus I’m The One, and Garson soon made his presence felt on Aladdin Sane.

The versatile pianist made telling contributions to the James Bond-esque ballad Lady Grinning Soul and the Brecht-Weill burlesque of Time, but he truly excelled himself on Aladdin Sane’s evocative title track. A highly original amalgam of Weimar-era swagger and Cecil Taylor-esque free jazz, Garson’s otherworldly piano solo on Aladdin Sane (1913-1938-197?) remains a thing of wonder, but its creator was awed by how Bowie stealthily coaxed such a stellar performance from him.

“I’d tried playing a blues solo and then a little Latin solo, but David said, ‘No, that’s not what I’m looking for,’” Garson told Starman author Paul Trynka. “Then he said to me, ‘Well, you told me about playing on the avant-garde scene in New York – why don’t you try something like that?’ That whole solo was one take. Boom. That was it. But it came because he got it out of me. I tell people Bowie is the best producer I ever worked with, because he let me do my thing.”

Bowie biographer Nicholas Pegg later suggested that Garson’s contributions to Aladdin Sane created “a vigorous hybrid between the Stones and Kurt Weill”, while the album’s more experimental leanings revealed that Bowie was keen to broaden his horizons beyond the guitar-driven anthems that had turned him into rock’s hottest property while fronting The Spiders From Mars.

Released on 13 April 1973, Aladdin Sane debuted at No.1 on the UK chart and made it to No.17 in the US, while Bowie went on to whip The Spiders’ UK audiences into a frenzy one last time during their UK tour of May and June. Then, on the tour’s final night, at London’s Hammersmith Odeon, on 3 July, he famously made good on the lyrics to the song Ziggy Stardust, breaking up the band in public at the very height of his first flush of fame.

Inevitably, fans (and some members of his band) were stunned, but there was no time for sentiment. Bowie had already embarked on the remarkable creative trajectory that would soon lead to further classic albums such as Diamond Dogs, Young Americans and Station To Station. Indeed, it was only decades later, when Bowie finally took stock, that he realised how urgent, compelling and downright essential an album Aladdin Sane really was.

“There was a point in ’73 when I knew I didn’t want to be trapped in this Ziggy character all my life and there were other things I needed to do,” he later recalled. “So, Aladdin Sane was almost like a treading water album, but funnily enough, in retrospect, for me it’s a more successful album than Ziggy was.”

Find out where Aladdin Sane ranks in our run-down of all 28 David Bowie album covers.