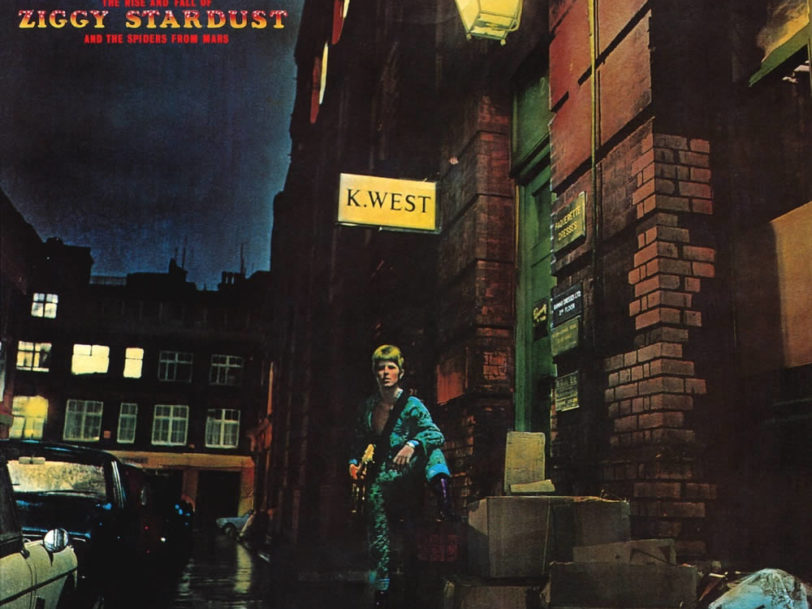 The Rise And Fall Of Ziggy Stardust And The Spiders From Mars: How David Bowie Became The Starman

David Bowie’s ‘The Rise And Fall Of Ziggy Stardust And The Spiders From Mars’ remains a seminal album in a galaxy of its own.

There are plenty of seminal rock albums, but few have had the impact of David Bowie’s The Rise And Fall Of Ziggy Stardust And The Spiders From Mars. Frequently cited for its influence on glam, punk and all that came after, Bowie’s fifth album not only skyrocketed its creator to stardom, but also birthed a monster he couldn’t control. As Bowie told Rolling Stone around the time of 1974’s Diamond Dogs the Ziggy Stardust character “really grew out of proportion, got much bigger than I thought he was going to be – Ziggy just overshadowed everything”.

Listen to ‘The Rise And Fall Of Ziggy Stardust And The Spiders From Mars’ here[Linkfire].

“We thought it would have a six-month lifespan”

Bowie had little hope of putting Ziggy Stardust back in the bottle once he’d introduced his extraterrestrial alter ego to the world. Indeed, the seemingly magical Ziggy character connected with all discerning, pop-crazed youths on a level that the blues and progressive rock bands of the early 70s could never hope to reach.

However, while many still believe The Rise And Fall Of Ziggy Stardust And The Spiders From Mars arrived sounding fully formed and fabulous in the summer of 1972, the origins of Bowie’s legendary album can actually be traced back to the early part of 1970, when guitarist Mick Ronson and drummer Mick “Woody” Woodmansey joined Bowie at his suburban London residence, Haddon Hall, to start working up the songs for his third record, The Man Who Sold The World.

Though initially collaborating with Bowie on an ad hoc basis, Ronson and Woodmansey (along with bassist and fellow Hull native Trevor Bolder) again appeared on his fourth album, Hunky Dory, and they would soon mutate into Ziggy Stardust’s future backing group, The Spiders From Mars. The snappy Queen Bitch was the only Hunky Dory track to offer clues to Bowie’s imminent change of direction, but a September 1971 trip to New York City was also significant in that Bowie was introduced to both Lou Reed and Iggy Pop – maverick figures who would inform how the Ziggy Stardust album turned out.

Reed and Pop embodied the more extreme, flamboyant elements of rock music, but while both are easily detectable in Ziggy Stardust’s DNA, Bowie’s character was also inspired by other nonconformists such as postmodernist US author William Burroughs and controversial British rocker Vince Taylor, whose messiah complex and issues with drugs caused his career to go into freefall. Anthony Burgess’ novel A Clockwork Orange also clearly influenced Bowie’s concept, not least in The Spiders From Mars’ image, which featured jumpsuits designed by Bowie’s then wife, Angie, and London fashionista Freddie Burretti, matched with colourful wrestling boots sourced from footwear specialist Russell & Bromley.

“David is an amazing singer”

Material-wise, some of the Ziggy Stardust songs even pre-dated Hunky Dory. Bowie had laid down early versions of Moonage Daydream and Hang On To Yourself when he formed the short-lived Arnold Corns project (also involving Burretti) in the early spring of 1971. Elsewhere, his cover of Ron Davies’ It Ain’t Easy was actually captured during the summer 1971 sessions for Hunky Dory.

Such was Bowie’s feverish creativity, however, that the Ziggy Stardust sessions began in earnest at London’s Trident studios in November 1971 – a month before Hunky Dory was even released. Ken Scott, Bowie’s co-producer, was suitably impressed by both the quality of Bowie’s new songs and his musical collaborators.

“What was to become Ziggy Stardust only took about two weeks [to record], with another two weeks for mixing, but this time we had moved from eight-track up to the relative luxury of 16-track, thanks to the addition of a new 3M M56 tape machine,” Scott recalled in his memoir, Abbey Road To Ziggy Stardust.

“David is an amazing singer, and 95 per cent of his vocals on Ziggy Stardust were done in a single take,” Scott recalled further. “Also, one of the things that really made Ziggy that much better were the great orchestral arrangements that Ronno [guitarist Mick Ronson] put together. Ronno’s contributions to not only Ziggy, but every Bowie album I worked on was major. He was a great guitarist, a great arranger and a great down-to-earth guy. Neither I nor David would have achieved anywhere near the success we had without him.”

“Starman was the eureka moment in rock’n’roll”

Loosely billed as a concept album, The Rise And Fall Of Ziggy Stardust And The Spiders From Mars concerned Bowie’s titular alter ego, a fictitious androgynous, bisexual rock star sent to Earth in order to save the planet from an impending apocalyptic disaster. Living up to such ambitions, the reality was every bit as good as the premise. Opening with the ominously dystopian Five Years, the album offered a consistent run of staggeringly great songs, from sumptuous ballads (Lady Stardust) to searing proto-punk anthems (Hang Onto Yourself, Suffragette City, the suitably messianic Ziggy Stardust) and the arena-slaying denouement of Rock’n’Roll Suicide, with its yearning, “Oh no, love, you’re not alone!” refrain.

However, while Ziggy Stardust already appeared to have all bases covered, it didn’t yet have the song which would launch Bowie on the international stage. Originally, its tracklist featured the Spiders’ exuberant cover of Chuck Berry’s Round And Round, but after Bowie’s label, RCA, requested he write a killer hit single for the record, Bowie penned Starman to replace it – almost as an afterthought.

Featuring a nifty Morse code-like guitar line copped from The Supremes’ You Keep Me Hangin’ On and hitched to a superlative Mick Ronson string arrangement and the dreamiest of choruses, Starman was a nigh-on perfect pop song, and it quickly determined the course of David Bowie’s future. His star was already in the ascendant when The Rise And Fall Of Ziggy Stardust And The Spiders From Mars was released, on 16 June 1972, but he went supernova after a legendary Top Of The Pops performance of Starman, on 6 July, which catapulted the single into the Top 10 – and captured the heart of virtually every British teen into the bargain.

“Starman was the eureka moment in rock’n’roll,” Spandau Ballet’s Gary Kemp told the BBC in 2008. “This creature appears on Top Of The Pops, and he was so shocking, so androgynous, so otherworldly.”

“We’re still bloody talking about it”

That Bowie had become the rock star of the age was quickly confirmed when The Rise And Fall Of Ziggy Stardust And The Spiders From Mars went Top 5 in the UK and Melody Maker ran a rave review of Bowie’s London Royal Festival Hall show with the headline “A Star Is Born”. From then on, the only way was up – at least until Bowie decided to famously “retire” his Ziggy Stardust character onstage at London’s Hammersmith Odeon in July 1973.

“I have to pass comment on how amazed I am that, 50 years after we recorded Ziggy Stardust we’re still bloody talking about it,” Ken Scott reflected in his memoir. “It was never meant that way when we originally did it because back then we thought an album would have a six-month lifespan. We had no idea that all these years down the line people would still be interested. Rock’n’roll wasn’t even that old at that point, so how could anyone know?”

Check out our best David Bowie songs to find out which ‘The Rise And Fall Of Ziggy Stardust And The Spiders From Mars’ tracks came in to land.