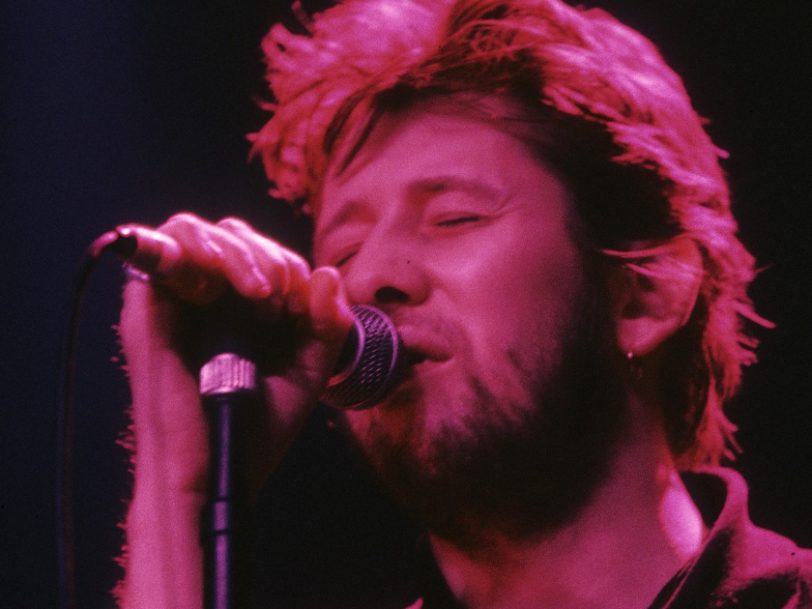 Shane MacGowan: The Pogues’ Singer Is A Man You Don’t Meet Every Day

Harnessing the lyrical brilliance of Irish folk and the aggressive snarl of punk, The Pogues’ frontman Shane MacGowan created a unique style.

Maverick singers often find a home within the music industry, but truly unique performers are few and far between. In Shane MacGowan’s case, however, the adjective “unique” seems appropriate, for this singular songwriter and Pogues frontman has left a mark on music like no one before or since.

MacGowan’s reputation rests primarily upon the music he made while fronting The Pogues. Through effectively cross-pollinating the potent Irish folk of acts such as The Dubliners with the energy and attitude of punk, MacGowan’s team were a force of nature during their 80s heyday. Spurred on by the quality of their mercurial leader’s songs, the volatile but brilliant band created a new type of rebel music, and their landmark albums, such as Rum Sodomy & The Lash and If I Should Fall From Grace With God, will endure for generations to come.

Listen to the best of The Pogues here.

“He had a very advanced reading age”: birth and early years

Most retrospectives paint MacGowan as the outsider’s outsider, but the reality is a little more complex. Few songwriters have penned more resonant immigrant songs, yet while MacGowan’s parents, Maurice and Therese, relocated to the UK before their son was born, they were atypically well-to-do and didn’t suffer the hand-to-mouth existence many post-war Irish émigrés were forced to endure.

Indeed, while MacGowan spent idyllic childhood summers at his family’s cottage in Nenagh, County Tipperary, in Ireland, he was actually born on Christmas Day 1957 in Pembury, just outside Tunbridge Wells, in Kent. He also later attended London’s Westminster School. No ordinary secondary establishment, MacGowan’s alma mater had previously educated influential figures ranging from architect Sir Christopher Wren through to high-ranking politicians such as ex-Chancellor Of The Exchequer Nigel Lawson, and stars of the stage, including Sir John Gielgud and Sir Peter Ustinov.

“We had a great meeting of minds”: songwriting influences

With hindsight, MacGowan’s relatively elitist education was both a blessing and a curse. On the downside, he was bullied, and the heavy drinking he’s so renowned for began in his early teens. Yet, while he developed a love of alochol, his thirst for literature was equally voracious.

“Both Therese and I would be reading writers like Evelyn Waugh and Graham Greene, and he would read them also,” Shane’s father told The Irish Times in October 2021. “We also enjoyed the mobsters in Damon Runyon. We read Sean O’Casey, DH Lawrence and Dostoyevsky (The Brothers Karamazov), and Voltaire and Sartre. This was all up to age 12; he had a very advanced reading age. We had a great meeting of minds up until age 12, and then Shane progressed on to more modern things and writers that I’d find challenging, like Günter Grass.”

MacGowan’s propensity for literature would feed into his songwriting talent, but his hatred of rules and regulations also meant he avoided school as much as possible. He often spent his time walking the streets of London, and his observations of the seamier side of life in the capital later inspired future Pogues classics such as Dark Streets Of London and The Old Main Drag’s no-holds-barred portrait of Piccadilly Circus’ teenage rent boys.

“I didn’t regard it as chaos – to me it was natural living”: forming The Pogues

MacGowan was, however, in exactly the right place at the right time for punk. He was one of a small group of people who were there almost at the genre’s birth, when he saw Sex Pistols support Joe Strummer’s pre-Clash R&B outfit The 101’ers at West Kensington’s Nashville Rooms, in April 1976. Strummer famously said that, after five minutes of the Pistols, he knew his old band were history. Shortly after, he formed The Clash with guitarist Mick Jones and bassist Paul Simonon.

For MacGowan, too, punk was an epiphany. In an interview with The Guardian during the late 80s he said, “I was happy during punk, incredibly happy. I didn’t regard it as chaos – to me it was natural living.”

A huge fan of The Jam and the embryonic Clash, in addition to Sex Pistols, MacGowan became one of the faces of the nascent London punk scene. Working at Ted Carroll’s Rock’s Off record store in Soho, he was at the heart of the action, and he initially formed his own punk outfit, The Nipple Erectors (later shortened to The Nips), who released a great mod-pop single, Gabrielle. It wasn’t a hit, but it intimated that a raw talent was already being honed.

The Nips remained a cult concern, but when MacGowan formed The Pogues in 1982, he was ready to go overground. Helped in his quest to fuse his love of the Irish folk tradition with the snarl and aggression of punk by talented multi-instrumentalists Jem Finer and James Fearnley, MacGowan created something truly unique.

“He has a brutal eye for detail”: classic albums and fame

The Pogues’ early gigs, in venues such as Camden’s Dingwalls and the group’s favourite stamping ground, The Pindar Of Wakefield, in King’s Cross, were the wildest in town and featured early MacGowan-penned classics such as Transmetropolitan and Boys From The County Hell.

The Guardian later recalled that the group “seemed both old and new, familiar and disorienting. They played immigrant songs: London-Irish rather than purely Irish, as dependent for their visceral insider reportage on the primal influence of the Sex Pistols as on The Dubliners.”

The Pogues’ first five years were their halcyon days – a period of unparalleled creativity which spawned three classic albums in Red Roses For Me, Rum Sodomy & The Lash and the band’s masterpiece, If I Should Fall From Grace With God. This mighty triumvirate of titles contain bounteous examples of MacGowan’s genius, ranging from the tenderness of The Broad Majestic Shannon to what The Guardian called the “bruised romanticism” of A Pair Of Brown Eyes and the “brutal realism” of The Old Main Drag.

“He can tell a story in a concise, cinematic way”: songwriting genius

Aside from reflecting his love of literature, MacGowan’s finest songs vividly drew upon his experience of both rural Ireland and pockmarked pre-gentrification London. His lyrical dexterity not only set him apart from his contemporaries, it has ensured that his work connects with each subsequent generation.

“His songs, even though they are hard-edged, always have empathy for the characters in them,” Primal Scream’s frontman, Bobby Gillespie, told The Guardian in 2018. “He has a brutal eye for detail and he can tell a story in a concise but almost cinematic way using these amazing images that just hit you in the heart with their tenderness and emotion.”

It was MacGowan’s “cinematic” approach to his craft which helped him create the song for which he will always likely be remembered, the towering Fairytale Of New York, featuring Kirsty MacColl. Arguably the biggest Christmas song that never made it to No.1, this remarkable festive ballad, which was influenced by both Sergio Leone’s Spaghetti Western epic Once Upon A Time In America and The Pogues’ first visit to New York, in 1985, has more than stood the test of time. Now the most-played Christmas song of the 21st century, its status as one of the best Christmas songs of all time shows no sign of waning and, for those whose jury was still out on Shane MacGowan’s songwriting abilities, it delivered proof of his talent beyond all doubt.

“There is the public image of MacGowan as a wayward alcoholic with a bombsite of a mouth and a wheezing ghost of a laugh,” James Fearnley wrote in his Pogues memoir, Here Comes Everybody. “But then there is the clever, diligent craftsman who sweated for two years to make Fairytale Of New York perfect.”

In retrospect, though, Fairytale Of New York was a double-edged sword for MacGowan and The Pogues. Its success made them a household name and elevated them to the arena circuit, but it also coincided with a time in which MacGowan’s personal demons began to engulf him. Nonetheless, he remained with The Pogues long enough to contribute excellent songs such as White City, London, Your’re A Lady, Rain Street and the Spanish Civil War-related Lorca’s Novena to the classic line-up’s final two albums, Peace And Love and Hell’s Ditch.

“His tender and brutal songs will live on”: Shane MacGowan’s legacy

Though less celebrated, MacGowan’s intermittent solo career also spawned two noteworthy albums, The Church Of The Holy Spook and The Crock Of Gold, recorded in tandem with his provocatively-titled post-Pogues outfit, The Popes. As it stands, the latter title, released in 1997, remains his most recent full-length collection of new material, but even if he never records anything else, MacGowan can rest easy in the knowledge that he’s left us an abundance of riches.

However, it’s even more gratifying to realise that his Keith Richards-esque survivor’s instinct means he’s still with us to enjoy the plaudits. Indeed, it’s a measure of the high esteem in which Shane MacGowan is still held that his 60th-birthday celebration, in 2017, was marked by a highly acclaimed tribute show at Dublin’s National Concert Hall, in which high-profile friends and associates such as Nick Cave, Bobby Gillespie and Hollywood actor Johnny Depp came to sing MacGowan’s praises and perform a selection of his best-known songs.

“I regard Shane as easily the best lyric writer of our generation,” Nick Cave told The Guardian in an interview shortly after that show. “He has a very natural, unadorned, crystalline way with language. Whatever the ragged contours of his epically unruly life, his tender and brutal songs will live on after he, and those of us who had the good fortune to experience him in his full creative flow, are long gone.”